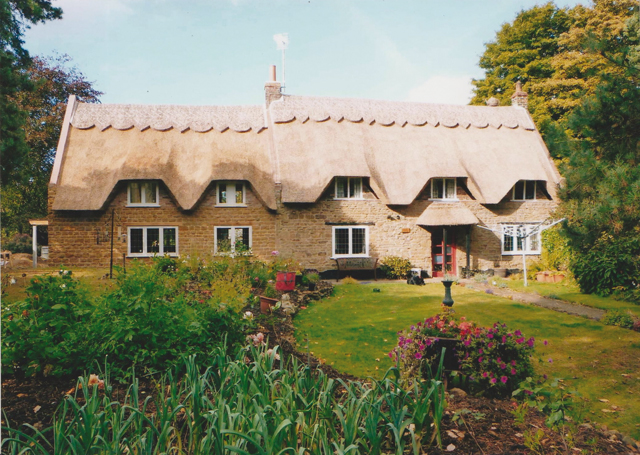 Born in Grimsby, Stewart Alexander was an outdoor type, but it was by chance that he discovered his vocation as a thatcher. “I had just left school aged sixteen and passed my driving test. I was at a bit of a loose end, then a friend of my uncle’s who lived in Surrey offered me an apprenticeship to train as a thatcher. I thought it would be interesting, and I ended up working for him in Guildford for four years.”

I asked Stewart if he wasn’t a wee bit nervous to start with, climbing on roofs for a living?

“It’s really the perfect job for me,” he said. “As a kid I was always climbing trees. My brother is the complete opposite, he’s an engineer working in an office. It’s not one of those things where you leave school and say, ‘Oh I’ll become a thatcher!’ I was mad on sports, played football a lot, and thought about going into the forces, but I love my work.

“My boss got me on the roofs straight away, in the first two weeks, and by the time I’d finished my apprenticeship I was quite confident climbing about.

“I still had a lot to learn, so I became self-employed and did another five years all over the country working for different thatchers. I worked up to become a member of the National Society of Master Thatchers, and for that I had to do three full jobs by myself.”

I asked Stewart if his work was tested: “Yes they would come out and speak to the clients, and now I have the right to display the emblem of the National Society and I can use it in my advertising. I live in Lincoln and work all over Lincolnshire and surrounding counties.”

YE OLDE WHITE HORSE
I first noticed Stewart when he was up a ladder giving a new look to my local hostelry, Ye Olde White Horse. Built around 1553, the White Horse has, to the best of my knowledge, the only remaining thatched roof in Spalding. Originally a private house belonging to William Willesby (the name still survives with Willesby Road) the building soon became a coaching inn. That’s what it remains today, with cars replacing the horse drawn carriage.

I was intrigued by the network of scaffolding and ladders – it can’t have been easy working on a building on a crossroads, by traffic lights and beside the main bridge into the town – and amazed to see how at home Stewart seemed on the roof. But he was happy to come into the pub for a break and talk to us about his work

He said: “On this pub it’s basically a re-ridge, which is replacing the top part of the thatch. The ridge is sacrificial, which means it’s there to protect the top fixing of the main thatch and take the brunt of the weather. After ten to fifteen years there needs to be a re-ridge. I clean down all the moss and do any repairs and that sees it through to next time.”

I asked Stewart what ‘nasties’ he finds in the course of his work.

“Not too much doing this job, but when you strip a whole roof you come across spiders, rats, squirrels, bits and bobs. The thatch is fixed to the timbers, there are battens running across and then a thickness of probably twelve to thirteen inches of thatch. That’s what keeps the water out.

“There are three main types of thatching materials: water reed, which is Norfolk reed, straw (which I’m using on the ridge because it’s pliable) and long straw, which is the oldest form of thatching. Normally you use what’s local, so down in the West Country it’s straw, in Norfolk it’s all reed because of the Broads. I have my own supplier, so I go and look at the job and see what’s needed.”

NEW BUILD
Is thatching a dying art? “No,” says Stewart. “Many of the older cottages in Lincolnshire are listed and have to stay thatched. There are quite a lot of thatched houses in Lincolnshire, and quite a few new ones going up too. I’m quoting on a job currently in north east Lincolnshire, I’ve got the plans through, they are doing a new build and want a thatch. You’re more likely to get planning permission for thatch than tiles really.”

How does it affect the house insurance? “There’s a specification that all new builds have to have a fireproof membrane on to the timbers before it’s thatched. That’s building regulations, but things can be done to reduce the insurance. I’m registered with the Thatching Advisory Services and have been on a couple of courses to be a licensed Thatchsayf Sprayer.

“I love what I do, every day is different and every bundle’s different. It’s easier with a new build, because it’s nice flat timbers and everything is lovely and straight. From a design point of view, you’re limited with what you can do with the thatch, but with a ridge you can do any design. In a new extension to an existing building I made the thatch to match the original.”

EAVESDROPPING
Stewart explained: “I’ve worked on a lot of old buildings, I think the White Horse is one of the oldest, but the thatch has usually been replaced so isn’t that old. Straw roofs are normally what you would associate with the typical ‘chocolate box’ thatch. This is because a new straw roof is always fixed on to a base coat of the original thatch, giving it that extra cottagey thickness.

“You can sometimes get roofs that are three layers thick, and when this is the case a layer will need taking off before putting the new straw thatch on top. So on many straw roofs the first layer will usually be the first thatch, which can be centuries old. This is where the saying ‘eavesdropping’ comes from, as people used to stand under the eaves to get out of the rain, and they were thought to be listening to what was going on inside the house.”

Still under thirty, Stewart is in his thirteenth year as a thatcher and is the only Member of the Society of Master Thatchers in Lincolnshire. It’s fascinating to hear him talking about his craft, but he is firmly fixed in today’s world, having worked in film and television.

He said: “I worked on thatching the sets for the Robin Hood film starring Russell Crowe, and also did two days filming as an extra (thatcher) in Snow White and the Huntsman. I’ve been on Grand Designs, and I worked using natural materials on the eco-friendly stand at the Ideal Home Exhibition in London.”

What about the future? “I like working on my own, but it’s very labour intensive carrying all the materials and clearing up, so I think I’ll take on an apprentice in time.” So the future is safe in the hands of Stewart Alexander, Master Thatcher.