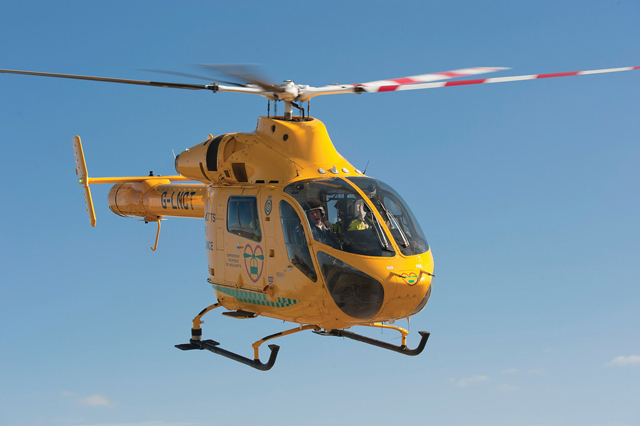 Our charity is 21 years young this year, and we thought it only right to say thank you to the pioneers who got us flying, and kept us flying! Here’s our potted history.
In 1991, the Board of the Lincolnshire Ambulance NHS Trust, of which our first chairman John Hill was a member, explored the possibility of providing an Air Ambulance for the county. Dr Alan Sagar, also still a trustee today, played a key role during the early inception of this service, giving many public speeches to support the introduction of a Lincolnshire Air Ambulance.

By early 1992 the Board of Trustees was in place and our first fundraiser, Thirza Hart, started recruiting volunteers, including one who still works for us today, Judy Johnston.

Our first charity headquarters were humble to say the least, including various Portakabins and even a caravan! Our first, very gratefully received donation was £50 cash, posted through the letterbox of Horncastle Ambulance Station by an elderly couple who had just married.

We flew our first airlift on 13th May 1994 and were able to maintain this for just four months until we ran out of funds and the service was temporarily withdrawn. We couldn’t afford to fuel the helicopter! This grounding of our service proved to be beneficial in raising our profile because people now had a taste for what could be done.

We then managed, through the help of one of our trustees, Paul Croft, to obtain sponsorship from Standard Group newspapers for two years. Seven months of fundraising later, in March 1995, we relaunched the service. Soon our charity began at last to receive sufficient monthly income to match our outgoings. An administrator was appointed to manage our finances, Maggie Woodward, who remained with us for over thirteen years.

The Lincolnshire farming community became great supporters of our charity, and this trend for rural support has continued, including some incredible fundraising from the Nottinghamshire Farmers Countryside Appeal (NAACA), and the biking, horse and sporting communities, which continues to this very day.

In 1996 the Nottingham Post offered us sponsorship that helped to establish a strong presence in Nottinghamshire. In 1997 we officially became the Lincs & Notts Air Ambulance. We also appointed an additional fundraiser for Nottingham, bringing the total paid staff to four!

In 1998 the team behind our Air Ambulance helped set up a national network of Air Ambulances; the National Association of Air Ambulance Services (NAAAS). Our current CEO, Peter Aldrick, joined our charity in September 1999 and became the first Chairman of NAAAS.

In October 2013 we reached another milestone, when after significant training and following full CAA approval we were given the all clear to start limited night-flying operations. We are one of only three Air Ambulance Services enabled and approved to fly after dark.

Many people over twenty-one years have played long and varied roles in supporting our charity, too many to mention by name. These include the many dedicated paramedics, pilots and doctors, of which there have been over thirty.

The expansion of our operations over the past twenty-one years means that the charity now needs £1.9m per year to keep the service running. That’s approximately £2,100 per mission, of which we fly on average three per day.

We now have twenty-six staff spread across the two counties and an incredible group of volunteers who help them make it all possible. Our Lincolnshire HQ and Nottingham Office are certainly now more fit for purpose, but some things never change. We remain reliant on donations and we are still non-government funded, but the incredible passion and loyalty of everyone involved, from crew to trustees, charity teams, volunteers and fundraisers, keeps the charity going from strength to strength. We have now flown over 16,000 missions since that first airlift in 1994 and have literally changed and helped to save thousands of lives.

Thank you to everyone out there who got us flying and keeps us flying.

The charity are celebrating their anniversary throughout the year; this month on 12th July at Southwell Racecourse and 26th July at Wollaton Park.

Find out more at ambucopter.org.uk