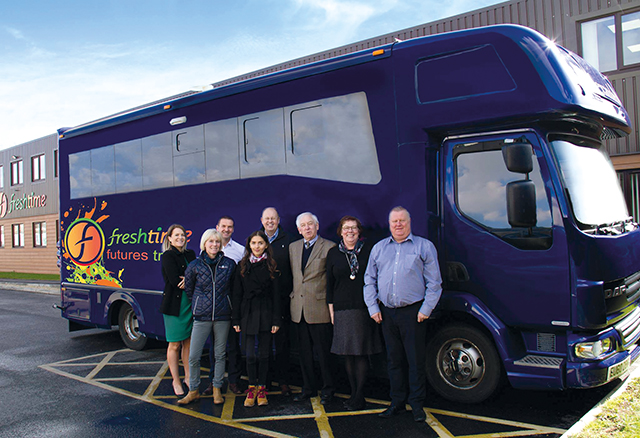 Freshtime Futures Trust is a charitable trust based in Boston which provides financial support for young people, 11-25 years old, within the local area but also across the county. The charity’s aim is to help empower individuals to reach their full potential. By Caroline Bingham

The trust was set up in late 2016 by Bostonian, John Richmond, when he was chairman of Freshtime, a local salad and vegetable preparation company which he founded. Last year the business was sold and is now known as Greencore Boston.

Freshtime Futures Trust gained charity status in March 2017 and the board of seven trustees is today headed by chairman John Stokes who has been involved with the trust since its formation.

“We are committed to helping young people be empowered to build bright futures,” said John, “to reach their full potential regardless of their background or circumstances. Since 2017 we have helped many individuals and organisations by providing financial help for their projects.”

The grants which the charity bestows are used for a wide variety of purposes by beneficiaries but these include securing specialist training or equipment, accessing apprenticeship schemes or to support additional academic or sporting pursuits.

“Ultimately, we do not want to see individuals hindered from achieving their goals due to financial hardship or illness. We look at each application and the case history to see if we can offer financial support in the short or longer term to help them achieve their goals. Our aim for the future is to help more young people – it could be as simple as helping with transport costs to funding equipment or acquiring new skills.”

Individuals and groups who have been supported by the Trust include Shannon Chelsom from Long Sutton. Shannon is a 17-year-old gymnastics coach at Holbeach and Fenland Gymnastics Club. She has been coaching since she was 13 after being asked by another coach while she was training. As soon as Shannon turned 16, she took the earliest opportunity to enrol onto and complete a level 1 coaching course. She was then encouraged to complete her level 2 course as soon as she was 17. She thought about this for a long time and finally decided to do it. That’s when she began contacting companies for their support. To Shannon’s surprise, Freshtime Futures Trust responded, agreeing to support with a grant of money.

Boston United under-12 girls’ team had a ‘dream of a lifetime’ trip to the Camp Nou Stadium in Barcelona from 14th to 17th June 2019, thanks to a generous donation from Freshtime Futures Trust. The Boston team were the only girls’ squad to take part in The Europa Cup – a youth tournament featuring teams from England, Wales, Denmark, Spain, Malaysia and Zambia – and they finished third in their group competition, which was held at the world-famous home of FC Barcelona. “With our support they reached their target,” said John, “and the team became the first English grassroots girls’ team to play at the home of Spanish giants FC Barcelona, the Nou Camp and follow in the footsteps of some of the best players in the world such as Messi, Ronaldinho and Maradona.”

The John Fielding School is based in Boston and assists young people in addressing their special education needs. After contacting Freshtime Futures Trust, the charity was able to provide half the funds towards the installation of a purpose designed, fully fitted sensory stimulation room. The facility has encouraged pupils to engage and explore their environment which can have a positive effect on their ability to react and interact with the larger world around them. The charity regularly hears from staff and teachers who have said the impact on pupils could be seen from day one of use.

Evie Toombes is a 16-year-old para showjumper from Skegness. Evie was born with spina bifida, which causes Evie discomfort and medical problems from the knee down. This means that Evie must undertake physio around five times a day to ensure that she can walk and retain mobility. Evie and her family have to travel around a lot when she is competing and her original horse box did not provide the facilities needed to keep her well when travelling. Freshtime Futures Trust provided Evie with a mobile medical vehicle/horsebox to ensure that she can stay as well as possible when travelling and competing as a para showjumper.

Tom Pogson is a talented and hardworking young boxer who asked the Trust for support in achieving his goal as a professional boxer. Tom is highly ranked in the UK’s top 10 for his age and weight. The Trust has supported him during his journey and is following his progress eagerly as he trains for the day his dreams come true.

Fundraising for the charity takes places throughout the year with a series of events held in and around Boston. The Freshtime Futures Charity Gala is held each September at the Springfields Events Centre in Spalding; attended by more than 500 guests, the evening stars a host of high profile tribute performers. Tickets sales, sponsorship and an online auction raise many thousands of pounds. Further funds are raised through Golf Days and donations.

Here have been just a few examples of the help the Trust can give. If you know of someone who could achieve great things with some financial help, please see the website: freshtimefuturestrust.org where there are more case studies and details of how to initially apply. The Trust would also like to hear from any individuals or other organisations who would like to become involved with the charity as it furthers its ambitions to improve the lives of young people in the county.