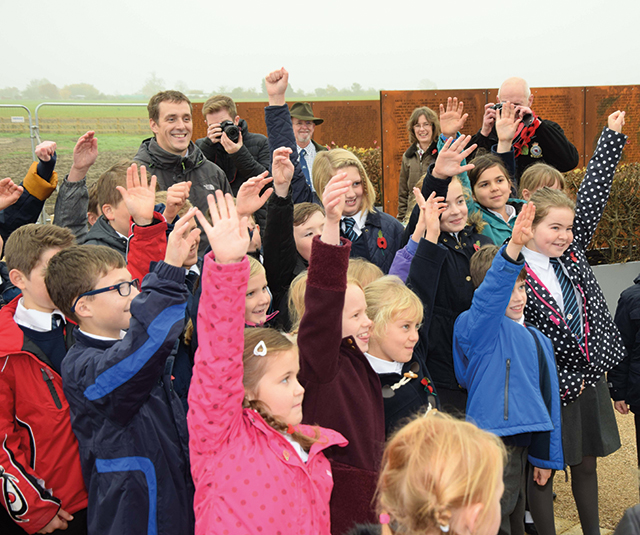 The founding three ambitions of the trustees of the International Bomber Command Centre were to not only provide a lasting memorial to and digital archive of the lost aircrew personnel but also to give future generations the opportunity to know their stories through research and education.
The centre will open to the public at the end of this month and hold an official opening event on 12th April but already many students and school pupils have had the chance to visit the site on Lincoln’s Canwick Hill.

The Chadwick Centre has been designed to provide a first-class visitor experience with moving and engaging interactive exhibitions. For students, it is designed to give a flexible and effective learning experience, with a wide range of resources and subject areas which specifically target Key Stage 2 and 3 of the National Curriculum.

There are also well presented pre-visit resources which are downloadable from the IBCC website, necessary for planning and briefing students, as well as post-visit activities for use in the classroom.

Visitors will be able to discover through sound, role play and immersive experiences what it was like to be on a bombing sortie; learn about navigation and how it was used; find out about the role of women in WWII and hear stories of the people who were there.

The recounting of the involvement of air crew from sixty-two nations across the world; the impact of the operations on targeted populations and the debates on the wisdom of the campaigns in the War Cabinet bring the scale and impact of a mid-20th century conflict into a 21st century context.

The strong human stories, some of which have been brought to life by actors on film, will help young people develop empathy for those who lived through these events. Others will be able to research their own family members who served in Bomber Command squadrons, giving a greater understanding of historical periods, courage, suffering and sacrifice. With over 1,000 (and growing) biographies on the names on the memorial walls, children will be able to understand the real people behind the losses.

IBCC has appointed a learning officer, Emily Robins, based at the centre who previously worked for the Commonwealth War Graves Commission. It will be her role to co-ordinate school visits as well as run adult learning classes in a wide range of subjects from genealogy to photography. Five to eleven year olds who visit the centre with their family will be given activity packs and there will be specific family and school holiday events with plenty of fun and interactive projects to get involved with.

The finishing touches are now being given to a multi-purpose auditorium, classroom and outdoor learning spaces as well as the exhibition itself. For school visits and family learners who don’t have iPads or smartphones there will be a bank of iPads and soon a free app will be available that can be tied to a particular key stage to ensure it is age appropriate.

IBCC CHAIRMAN TONY WORTH CVO
The creator and driving force behind the IBCC project and former Lord Lieutenant of Lincolnshire, Anthony James Longmore (Tony) Worth, died in November aged 77 after a brief battle with cancer.

His loss is felt by the whole team based at the new Canwick Hill site and the many other organisations he worked with in the county, who all send their thoughts and prayers to his friends, colleagues and family.

“Tony was the creator and driving force behind the project which is being built to ensure that the story of Bomber Command can be preserved and told for future generations, and that the service and sacrifice of those who lost their lives can be honoured.

“Closely bound with this concept was his desire to tell of Lincolnshire’s contribution to the outcome of the Second World War.

“Tony had a passion for the county and spent much of his life serving the people and institutions based here.

“Tony was Patron of Heritage Lincolnshire and over many years had worked on various boards looking at protecting the area from flooding, to chairing the Cathedral Chapter, being a Governor of the University of Lincoln to serving as county president of the Royal British Legion.

“He also served as the Lord Lieutenant of Lincolnshire for nearly a decade having previously been the High Sheriff and Deputy Lieutenant, which led to him being awarded a personal honour from Her Majesty the Queen.

“He will be sorely missed by the many people whose lives he has touched. The team at the IBCC are more determined than ever to ensure that the project creates a lasting and fitting legacy and that Tony’s traits of determination, energy, passion and enthusiasm, sprinkled with great humour, live on in all they do.”

Tony Worth, was born into a farming family in Holbeach. He is survived by his wife Jenny and their four children as well as grandchildren. A memorial service will be held in Lincoln Cathedral on 12th January at 11am.