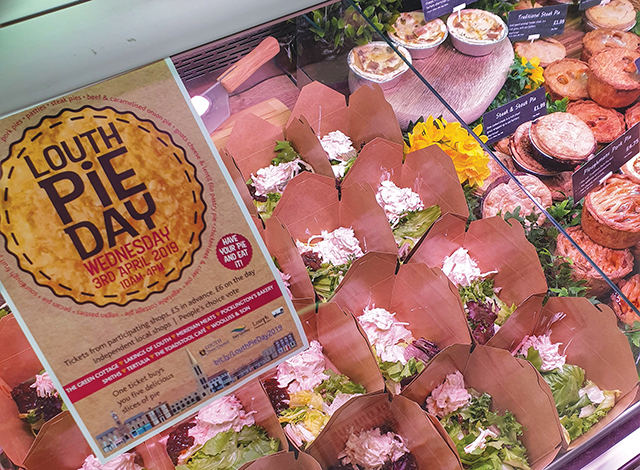 Louth, which is normally known as the ‘Capital of the Wolds’, became the ‘Pie Capital of the World’ for a day as part of an initiative to encourage people to shop locally.
The first ever Louth Pie Day proved to be a roaring success thanks to the town’s independent pie makers and sellers, who joined forces to offer a mouth-watering range of hot and cold, savoury and sweet pies on a special Pie Trail held on market day.

So successful was the event, the pie shops said they sold three normal weeks’ worth of pies during the one-day festival and some ran out of certain pies altogether.

Gary Denniss, chairman of Louth Independent Traders said it was a great event: “It was a huge success and proved to be very popular. The idea was to encourage people to shop locally rather than go to the supermarkets.

“We wanted people to visit the town’s pie makers and sellers so they could see what was on offer in their shops and it was extremely successful, with some shops selling out of some pies.”

The pies on offer were sweet and savoury traditional pies, heritage pies, vegan, vegetarian, and gluten-free pies and pasties.

Members of the public then voted for their favourites and the winner of The People’s Choice Trophy was The Toadstool Café in Queen Street which had the two top pies, each with an equal number of votes.