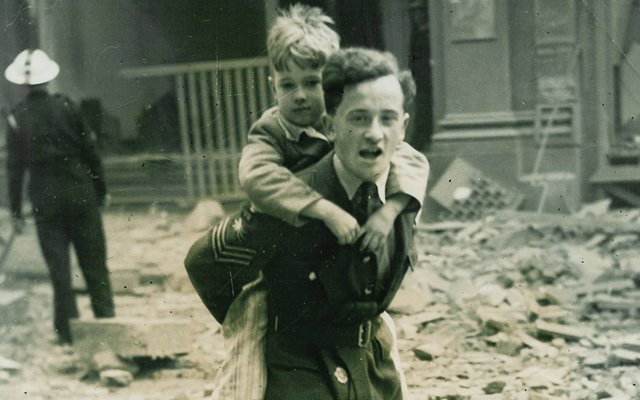 The story of my long-lost friend Sergent George Kesten, published in ‘Lincolnshire Life’ as a two-part serial in March and April this year, produced an astonishing response from Rabbi Norbert Aronson in Manchester.
One of his sons came across the article purely by chance whilst browsing the Internet, and realised that George was his father’s uncle.

Those who are familiar with the original story will remember that George was a Polish Jew born in Berlin. I first met him in London on 30th August 1943, the day we both joined the RAF. We stayed together for thirteen months through our various courses until late September the following year, when shortly after both being promoted to Sergeant, we were parted.

George was posted to Ludford Magna to join 101 Squadron as a German-speaking specialist operator to become involved in a highly dangerous but vitally important telecommunications war against the enemy, using a complex system devised by the British Research Establishment known as ‘Airborne Cigar’ (or ABC). It had become imperative to reduce considerably the loss of Allied bombers to German fighters who were being guided on to our aircraft by their ground controllers. Much of what the squadron was doing remains secret to this day but there is no doubt it was suffering horrendous losses, with only three squadrons in Bomber Command losing more men and aircraft.

Sixty-four years later, as a result of a chance enquiry to The Commonwealth War Graves Commission, I was advised that George had perished on 4th November 1944, whilst taking part in a huge bombing raid comprising 749 aircraft on Bochum in the Rhur Valley. That would have been about six weeks after I last saw him. The other crew members of his Lancaster, six of whom were Canadians, died with him. All eight men, after first being buried in a local German cemetery, are now buried together in a collective grave in the Commonwealth War Graves cemetery at Rheinberg, near Duisburg, alongside 3,326 other servicemen of the Second World War.

That would have been the end of the story had Rabbi Norbert Aronson not contacted ‘Lincolnshire Life’ asking to be put in touch with me. Apparently, my story had placed his family in a state of high excitement, particularly his mother (George’s sister, now living in Holland, and not Switzerland as I thought). Although she believed she had achieved closure on a painful chapter in the family history, she was ecstatic to think that someone had been ‘discovered’ who not only knew, but also served alongside, her young brother all those years before.

There followed a series of e-mail messages between Rabbi Aronson and myself, resulting in us being able to exchange certain information that we had previously been unaware of, particularly regarding George’s sister. I had often wondered over the years whether she was still alive, but I was told that she was a very fit and sprightly elderly lady living in Amsterdam with her equally fit ninety-two-year-old husband, who is a cantor – and she would like to speak with me.

Rabbi Aronson arranged for his mother to telephone me from Amsterdam; thanks to the marvels of present day technology, her daughter living in Jerusalem was also able to join in the three-country conversation. Although a highly emotional event, it gave me much pleasure to speak to this wonderful, dignified lady who had suffered so much in the past, losing not only her mother and father (who perished in Poland in the Holocaust) but also her beloved young brother who died while trying to avenge his parents’ death. George’s death was especially poignant for her: “My parents had another son who died,” she reminisced, “and when Gershom (George’s Jewish name) was born they were ecstatic.”

On 29th October 1944, six days before her brother died, Bracha Aronson married her husband, Aron Aronson, son of an established Dutch Jewish family, in Switzerland. After the war ended they returned to Amsterdam, where they became leading figures in rebuilding the Jewish community, and where their home became known as an international meeting place for European and Israeli rabbis.

In 2009, sixty-five years after George’s death, the family in Israel organised a minyan (religious service) at George’s gravesite, with her husband and son joining the service for the very first Kaddish (a prayer by mourners after the death of a close relative). Four generations stood at the gravesite, praying together for those souls brutally uprooted in their prime, leaving nothing, not even a tombstone.

N.B. On his headstone (and in the War Graves Commission records), George’s age is given as twenty-two when he died in 1944, but I now know he was born in 1925 (as I was) which would mean he was only nineteen. He was desperate to join the RAF, but probably thought he would be turned away if he gave his correct age (as he had been on a previous occasion), although eighteen was actually an acceptable age for recruits at that time. This ‘error’ stayed with him until his death.

On that fateful night of 4th November 1944, 101 Squadron lost two Lancasters and two crews. All sixteen men, including George, are permanently commemorated on the Roll of Honour in the village church at Ludford Magna. The raid, although considered to be successful, proved to be the last major raid by Bomber Command on that particular target. Of the overall total of aircraft that took part, five Lancasters and twenty-three Halifaxes were lost, mainly to German night fighters. Six months later the war in Europe would be over. Ironically, George and his crew were nearing the end of their first tour of operations.

On 17th July 1944, George was spotted by an ‘Evening Standard’ photographer in London carrying a small boy out of his bombed-out home. I knew nothing about this, and can only assume that George was on leave at the time. I was certainly not with him.
George was just one of 55,573 airmen of Bomber Command who died in action in the Second World War – all fit brave young men in their prime who had everything to live for, yet they gave up their lives for us. They have always been denied a campaign medal or a memorial, but at long last, after nearly seventy years since the war ended, the foundation stone for a permanent memorial – estimated to cost £5 million – was laid in Green Park, London in May. This long-overdue recognition of the overwhelming sacrifices those men made will be completed in June next year.

TRACING A BROTHER’S LAST STEPS
The Aronsons flew to Lincolnshire last month and visited Ludford, to view the Roll of Honour in the Church of St Mary and St Peter. I was able to spend the day with Cantor Mottel, Cantor Aron and Bracha Aronson and their grandson Jonathan as they toured the village and what remains of RAF Ludford Magna. We were accompanied by Dave Harrigan and Phil Bonner from Aviation Heritage Lincolnshire, Gary Weightman, the editor of ‘101 Matters’ (who is a serving RAF officer based at Cranwell) and Al Greethurst, a Ludford resident who served with 101 Squadron. They were able to provide a factual history of the base and 101 Bomber Command Squadron which flew from there. Their knowledge and respect for these airman helped to give the Aronsons and myself some idea of how awe-inspiring the sight and sound of up to thirty Lancasters taking off within a ten-minute time span must have been, as well as the enormous casualties (reaching a peak of 1600 in only an eighteen month period during 1944-45) that the squadron suffered, of which George Kesten was one. Thank you to the other Ludford residents, Mr Guthrie, Anna Reed of the Black Horse and Mr G Stanley, who also helped me in arranging this very poignant and memorable visit for the Aronsons. The visit was also filmed by BBC Look North.