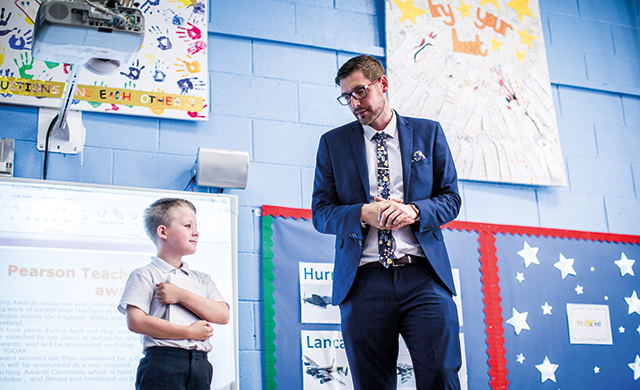 Kate Chapman hears how a primary school which has turned itself round in the face of adversity has been named School of the Year for its outstanding achievement.
Staff, pupils and their families at Gainsborough’s Benjamin Adlard Primary School are delighted with the recognition which they have received from The Pearson Teaching Awards.

In highlighting the school’s efforts the awards body said Benjamin Adlard Primary ‘is providing an exceptional education in very challenging circumstances’ adding that it has ‘been on an incredible journey, proving that better is always possible and bringing hope to a community where hope was once hard to find’.

Headteacher Sam Coy said the school has been through difficult times in the past and since the launch of OFSTED (Office for Standards in Education) back in 1992 it has only ever been placed in special measures or graded as requiring improvement – until now, when it has received its first good rating.

“Our school is in a very challenging area, in the past it has struggled to embrace the things that it needed to, but we have put new systems in place and processes to ensure improvement in the quality of our teaching and it’s paying off,” said Mr Coy.

“It really has been a team effort; this is an award for the whole school, and that’s the nice thing about it. Everyone, all the staff, the pupils and the families who support the school community have all played a part and it’s testament to their hard work.”

The School of the Year – For Making a Difference award is a new category introduced to recognise schools which have transformed the life chances of children and their local community, something which Mr Coy has been focusing on since taking up the headship in Gainsborough three-and-a-half years ago.

He was only 27 when he was offered the job of headteacher and this was the first time he had taken on the role.

Mr Coy admits the community where he works has its challenges given that 70 per cent of its pupils qualify for pupil premium – additional funding designed to help disadvantaged pupils of all abilities perform better, and close the gap between them and their peers – compared to the national average of 23 per cent.

A further 41 per cent of children at the school have special educational needs and there is also an issue relating to mobility with a 30 per cent turnover of pupils as they move in and out of the area.

“House prices here are the cheapest in the county and a lot of our families come from the south and end up here without a support network,” explained Mr Coy.

“It’s been quite hard for us to build relationships with these families and for them to have trust in us, but over the past couple of years that has become really strong.

“We’ve put in place a lot of initiatives to work with local families and are in the process of working on even more too.”

Drives launched at the school, which has 235 pupils in nursery up to year six, include focusing on pupils’ behaviour, manners and politeness and improving the quality of teaching.

The school supports local nursing homes too, and has bold, inspirational plans to create a community hub with the police force to help with debt counselling, housing support, employment support, food banks and is committed to helping all parents and pupils, whatever their personal challenges may be.

Other initiatives include the launch of a forest school, which is also proving incredibly popular with pupils.

“Things started to turn around within a year, and what’s quite unique is that all the staff that were here when the school was in special measures are still here now.

“We haven’t removed staff we have just changed our leadership and strategies,” explained Mr Coy.

“Now we just want to keep doing a good job, build on these foundations, make sure teaching and learning remains strong and that the school’s reputation continues to grow.”

The Pearson Teaching Awards are bestowed by The Teaching Awards Trust, which was established in 1998 by David, Lord Puttnam CBE, as a means of recognising and celebrating excellence in education. The awards honour outstanding teachers and teaching and highlight just how vital success in education is to the health and wealth of the UK.

Benjamin Adlard Primary School was nominated for its award by a supply teaching assistant and was initially presented with a silver award earlier, back in May. It was one of six schools shortlisted in its category and found out it had won the gold award at a special ceremony held in London in October.

The awards night was also broadcast on BBC Two on Britain’s Classroom Heroes.

“Being nominated was a really nice surprise,” added Mr Coy. “Our pupils were so excited that they were going to be on the television. Lots of them watched it at home with their families and we also had a screening in school.

“They just want to touch the award – it’s lovely to see and quite emotional.

“The school had quite a challenging reputation; we’ve been working really hard on the community hub and going forward we want to continue to raise the aspirations of our pupils and provide more and more opportunities for them to be as successful as they can.

“More than anything we want to put the school at the heart of our community.”

For more information about the school visit www.benjaminadlard.lincs.sch.uk