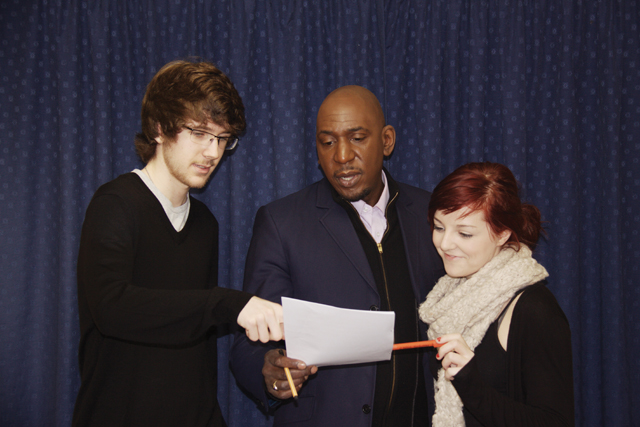 Lincoln actor, Colin McFarlane, is the inspiration behind a new schools project that will encourage local students to explore their family trees and cultural backgrounds. If successful, some of the students could team up with celebrity mentors and their stories filmed for a pilot TV show.
Working with Lincoln Castle Academy (the new name of Yarborough School, Lincoln), the ‘Who do you think you are?’ inspired project is aimed at eight to eighteen year olds and Dr Nick Barratt, the genealogy consultant for that series is on board to support ‘Making History – Archived’. He said: “This project is absolutely essential because it brings history to life, making it relevant through the exploration of personal heritage and the stories the associated research techniques throw up – shedding light not just on our individual backgrounds, but also onto how those stories weave into the rich tapestry of the world around us, and how it came to be. It teaches us that history is more than just dates, facts and famous people from the past – it is a way of looking at the world around us, understanding our communities, sharing our differences, recognising our similarities. Most importantly, it allows the students to develop a mighty toolkit of skills that can be applied in all walks of life – framing questions, researching evidence, interpreting findings, marshalling arguments and defending viewpoints.”

Colin is best known for his appearance in two ‘Batman’ films and also as the voice of TV’s ‘The Cube’ but he has a long theatre-based career both on stage and as a director. It was while directing Judy Hepburn’s script reading of ‘The Land of Look Behind’, (a film set in London with ‘Eastenders’’ Rudolph Walker); that the idea for the project began. They pondered whether they could give children the chance to explore their origins in a similar way, confronting the past to create the future. Colin later got together with Education Specialist, Lincoln-based, Jeff Howson, to help guide him through the world of education.

1st Generation, Colin’s own production company, is the driving force behind the project’s delivery and he is excited that six out of the twelve schools taking part are based in Lincoln. “We have a chosen a diverse group of schools which will each provide some potentially fascinating stories,” explained Colin. “Lincoln Castle Academy will be taking part with other schools from London and Cambridge and it is exciting to be working with a school right on my doorstep. The exciting part comes when the children have to go out of their comfort zone and visit and share stories with the other schools – some disadvantaged, some prosperous; it will be a fascinating coming together!”

Mr Pete Roe, Head of History at Lincoln Castle Academy said, “The idea is to celebrate cultural diversity and raise aspirations using a subject like history. This is very much a personal experience, with students using their skills to find out about who they are, where they came from and where they might go in the future. This project is all about where we come from and it gives us a more of an understanding of society. It puts into context things you take for granted.”

Each region will have one celebrity mentor and there will be other celebrity visits across the six months where inspirational figures will share their heritage with the children. The project will explore many ways of discovering heritage including family memories and documents, archives and websites. It is hoped that children will be inspired by the chance to use multimedia to explore their origins and share information and experiences using a mix of animation, short films and webcasts to collaborate with the other schools. Finally, they will compete for the chance to have their films screened at the BFI in London with stars in attendance. The whole process will also be filmed as a reality show, as we witness them discovering the stories from their social and family history.

“I want ‘Making History – Archived’ to bring cultures and people closer together,” said Colin. “This project can uncover stories from the past that can affect not only the present but also the future by raising aspirations, breaking down cultural barriers and instil a fundamental sense of well-being.”

This year’s first phase of the pilot project will run until October 2011, with a further two years planned beyond which it should be self sustainable.

If you would like more information on, ‘Making History – Archived’, you can visit www.makinghistory-network.co.uk