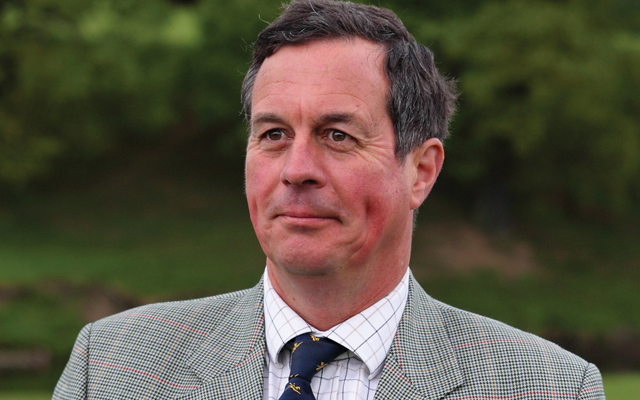 The Land Rover Burghley Horse Trials has been a sporting and social highlight of the Lincolnshire year for half a century. Millions of visitors have enjoyed the Stamford event’s mixture of top-class equestrian competition, wonderful shopping and showcase of local produce since its inception in1961, and this Autumn’s 50th Anniversary (1st-4th September) promises to be one of the best.
Hundreds of people work together to make Burghley such a success, many of them volunteers. One integral cog in the gigantic wheel is south Lincolnshire-based Mark Houghton. The fifty-three-year-old Lieutenant Colonel, a former commander of the King’s Troop, acts as the Cottesmore sector cross-country steward. This means that he is responsible for one-third of the track on cross-country day, the busiest and most popular day of the event. His section of the formidable course runs from the start around the trade stand area and through the main arena, and he is also in charge of the final part of the track as it returns through the arena to the finish. “I recruit the fence stewards, make sure they are trained properly, and ensure that they have the right kit,” says Mark. “I then act as incident controller for part of the course and am the eyes and ears of the cross-country controller, Richard Clapham.”

Mark has been a sector steward for around fifteen years, first acting as assistant to Leslie Dungworth. He acts as a steward for the sport of eventing’s organising body, British Eventing, at several Lincolnshire competitions, including Belton, Lincoln and Oasby. His wife Sue, was born in the county and daughter Emma is at Stamford High School, all the family hunt with Lincolnshire’s most prestigious pack, the Belvoir. “The atmosphere at Burghley is so special,” he says. “Of course it is in a lovely setting, but what is remarkable is the high standard of everything they do, not only in the main competition but also in the subsidiary events such as the Pony Club team jumping and the Dubarry Burghley Young Event Horse classes.”

Cross-country day is the result of months of preparation. “Everything has built up towards it, and your one hope is that the day goes without incident,” says Mark. With such an innovative and challenging track as the one designed by Captain Mark Phillips, that won’t always be the case. Mark Houghton remembers well Zara Phillips — the course-designer’s daughter — having a fall at a fence made of carved wooden mushrooms a few years ago. “Those mushrooms quickly became toast!” he jokes.

Mark makes sure he is up at the fence judges’ car park by 8.00am on cross-country day.

“Most of the fence judges will have arrived by then and gone for breakfast,” he says. “They then go to their fences and I go round checking that they are in place and have everything they need. I then return to my sector headquarters, which are near the lake, and the first horse sets off on the course at about 10.00am.” Mark has a vet with him, a fence repair team and his assistant, local farmer Adam Cooke. They monitor the radio waiting for news, and have a video feed so they can observe what is going on round the rest of the course and spot potential problems. “At the end of the day the judges hand in their equipment, then all the judges and stewards go to the Members’ Marquee for tea. We then wait to be released from our duties — we can’t just go in case there is a query or an objection to something that happened in our sector.” It is a long day throughout which Mark has to stay alert and react quickly if action is needed. Like a swan, the seemingly effortless way The Land Rover Burghley Horse Trials organisation sails across the water is belied by a great deal of hard work below the surface.