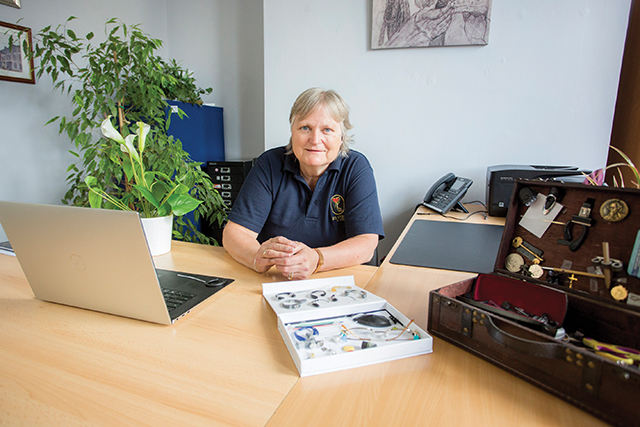 After battling Parkinson’s for more than 18 years Sandra McDonough has invented a beautifully simple device which has dramatically reduced her symptoms. As she tells Kate Chapman, Sandra now hopes it will help others.

It took Sandra two years to perfect the Eye Guide MC – a lightweight, discreet implement that sits unobtrusively over the wearer’s ear, like a hearing aid – which can instantly improve the debilitating symptoms of Parkinson’s by sending a new message to the brain.

Sandra, of Spalding, was diagnosed with the condition just before her 40th birthday and gradually deteriorated until she had to stop driving and was resigned to using a wheelchair. She came up with her invention when she had almost given up hope of living in comfort again.

Now Sandra, along with husband Chris, has launched her own business and is selling the guides, which are fitted at their clinic in Long Sutton.

“The Eye Guide MC is a very thin and discreet device that hooks over the ear. It is carefully calibrated with weights so that it sits in the perfect position in the peripheral vision in order to send a new message to the brain, overwriting the signals which affect balance, speech and movement and cause tremors in people with Parkinson’s,” explains Sandra.

“It’s by no means a cure, and isn’t going to work the same for everybody, but the results we are seeing so far are very encouraging.”

Parkinson’s is the fastest growing neurological condition in the world – affecting around 145,000 people in the UK. It occurs when the brain cells that make dopamine begin to die and can cause more than 40 symptoms, from tremors and pain to anxiety. Some are treatable, but the drugs used can have serious side effects. The disease gets worse over time and as yet there is no cure.

Sandra had been suffering various symptoms for around a year before she was diagnosed with Parkinson’s.

“It all started in my little finger, it wouldn’t stay still. But I ignored that, and my back was bad too but suddenly things started to get worse,” she recalls.

“It had been going on for about a year – my tremors were severe, and my walk was bad and one day I woke up and everything was on the move – my arm, my leg.

“I was initially treated for anxiety but after three months I was diagnosed with Parkinson’s. It was almost a relief to know what it was.

“I had the idea for the Eye Guide MC when I was at my lowest. In 2015 my Parkinson’s took a complete nose-dive and it was winning the takeover bid.

“No medication was making me feel any better and I was suffering with my mental health. Everything felt impossible. That’s when I was introduced to someone who is now not only a lifelong friend, but also a key member of the Eye Guide MC team – Parkinson’s nurse specialist Ann Saunders, who helped turn my life around.”

The inspiration for the Eye Guide MC came after doctors told Sandra an eye patch would help improve her walking.

This gave her the idea that the eyes held the key to a potential solution to Parkinson’s symptoms.

Sandra, a Parkinson’s UK volunteer, has always loved inventing and tinkering with watches and mechanical items around the house and previously made herself a light-up walking stick, so people could see her when it was dark.

“One day I was fiddling with a little knitting marker, which my niece had given me, and placed it on my glasses. I immediately noticed an effect on my hemispatial neglect – a condition which meant I had no awareness of the world on the left side of my body. For the first time in a long time, I was aware of things there,” she explains.

“The idea came to me like a lightning bolt. It was beautifully simple and mind-blowingly clear. If I could alter messages to my brain by simply placing something in my peripheral vision, I could make a device that could help to control Parkinson’s symptoms.”

When wearing the Eye Guide MC, Sandra has control of her tremors and is able to speak clearly, has better body balance and can walk straight.

To create a scalable production model and business plan, Sandra and Chris sought funding from the University of Lincoln’s Productivity Programme and Parkinson’s UK – both of which have helped Eye Guide MC with grants. So far, more than 60 people have been fitted with the Eye Guide MC, with astounding results. The Guide has Medical Device Accreditation and a CE Mark.

“Finally, being able to share my invention with other Parkinson’s people as we launch our business far and wide is the very best feeling in the world. It is so hard to explain in words the difference the Eye Guide MC can make,” says Sandra.

“For me – tremors, gone. Speech, normal and not slurred. Balance, good. All the things that make life a daily and painful struggle for Parkinson’s people can be gradually solved by our device. I’ve not cured Parkinson’s, but I’ve created a way to control it. When I take the Eye Guide MC off my tremors return with immediate effect – but that’s OK, I can live with my condition now. This is me, the lady with Parkinson’s who invented a way of regaining independence.”

As well as working to spread the word about the Eye Guide MC, Sandra and Chris are looking to the future and hoping the invention will eventually be recommended by everyone as a good medical aid and that it will be developed further. They would also like to open their own Parkinson’s respite home too.

To find out more and to arrange a fitting contact the team on 01406 362028 or email info@eyeguidemc.co.uk