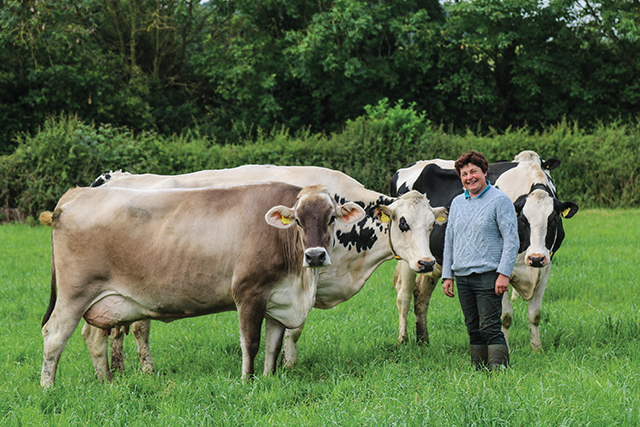 An all-female team is leading an exciting new diversification at a Lincolnshire farm which has installed a self-service vending machine, so customers can collect their own daily milk in glass bottles.
Manor Farm, Boothby Pagnell, near Grantham, has seen a steady stream of visitors flocking to the farm gate since launching Bassingthorpe Milk at the start of July.

The new business was the idea of Anne Harrison (59), who manages the farm’s herd of pedigree Bassingthorpe Friesian Holsteins. She has teamed up with her sister, Julie Smith (56), who previously worked in the catering industry and is now in charge of the pasteurisation process and Julie’s daughter, Rachel (28), who oversees the twice-a-day milking routine.

Their farm is home to a 400-strong herd made up of 200 milking cows and 200 young stock, plus a small number of Brown Swiss cows.

The venture came about as the family looked to diversify their business in order to safeguard it for the future and was launched following 18 months of research and preparation.

“There are not many farms that are just female-led and this is a genuine diversification for us,” explained Anne. “We wanted to add value to the milk for ourselves, because the supermarkets have massive control over pricing, and for the customer who will be buying such a great product.

“Our self-service milk has the added environmental benefits of zero food miles and being collected in containers that can be used time after time.

“Our goal is to build a business that is sustainable for the next generation, like our Dad did for us, and we thought it would make a difference if we could sell a small proportion of our milk directly to the public.

“We’d seen other farmers in other parts of the country doing it, so we thought we’d give it a try and with Julie’s catering background, it seemed like a good fit. We only started pasteurising in November, and have been supplying Hambleton Bakery and Hambleton Hall, near Rutland Water, and then we launched the vending machine a few weeks ago.

“Already people are coming a long way to use it, there’s been more interest than I ever could have imagined, which is wonderful.”

The milk is sold for £1 per litre from a dairy shed built on to the end of a barn, while the specially designed reusable glass bottles cost £2 each.

Anne says the vending machine steam-cleans itself after every use and is easy for customers to use, although the family has been manning it initially in order to help people work it.

After pasteurisation the milk does not undergo any further processing; the end product is 96 per cent fat-free and contains nutrients including calcium, protein, iodine, potassium, phosphorus and vitamins B2 and B12 and should be regarded as a superfood.

“There was quite a bit of deliberation about where to put the machine, I’ve seen some in pub car parks and places like that, but in the end we decided to place it at the top of our driveway,” added Anne.

“There’s a children’s nursery just down the road, so it’s ideal, as one of the other things we’re keen to do is help educate people about where our food comes from.

“Farmers have had some bad press lately which is a shame; milk is a natural product, but it’s been badly marketed. Full fat milk is 96 per cent fat free and its full of minerals and nutrients that are good for us and we want children to understand where these things come and then make informed decision themselves.

“We’re also hoping to take part in Open Farm Sunday next year too, as well as working more closely with the schools in the area.”

The family worked with South Kesteven District Council (SKDC) environmental health officers ahead of the launch and Anne admits it was a steep learning curve for both, as it is the first business of its kind in the district.

“We would not have been able to reach this point without the help of SKDC,” she added. “The officers led us through all of the food regulations we had to comply with.

“They have been second-to-none. We have also received a lot of advice from our friends in the farming community, particularly one over in Leicester who we ended up buying second-hand equipment from.

“The machine holds 150 litres of milk and we get a text message if it’s running low of if there are any other problems with it.

“Our customers can buy their glass bottles, which are dishwasher safe, so they can reuse them and most are buying two or three so they can have one in the fridge, one being cleaned and one to bring back and refill.

“We’ve made it so the machine should run itself, but our telephone number is on there in case there is a problem and it’s also contactless, in case people don’t have the right coins.”

Anne and Julie are the third generation of their family at Manor Farm; their grandfather even had a horse-drawn milk round in Grantham before World War Two and Anne says the latest development has taken the farm almost full circle.

“It’s still early days, but things are going well and there’s definitely scope to expand some more,” she added.

“Sadly, there aren’t many dairy farmers left in Lincolnshire, although there are a few making cheese, which we considered too.

“But we decided to start off on a smaller scale and there’s definitely scope for us to expand and with the equipment we have we could even sell bread and eggs here too, which would save the nursery mums from having to go into town to the supermarket.”

Councillor Dr Peter Moseley, SKDC’s cabinet member for commercial and operations, praised the farm’s diversification saying: “Anne and Julie have been a pleasure to work with and have done a brilliant job. I have been looking forward to trying the finished product and it has been worth the wait.

“It’s good to see this kind of diversification, and self-service is a fantastic way of providing farm-fresh milk to the community.

“This matches our commitment to supporting environmentally-friendly projects. The milk is produced with no food miles and customers can collect it in one of the refillable bottles or take their own container.

“Consumers support British food and farmers and I am delighted to see Anne, Julie and Rachel pursuing this opportunity for business growth in South Kesteven.”

Bassingthorpe Milk is available between 7am and 7pm from Manor Farm, Boothby Pagnell, Grantham, NG33 4DH.