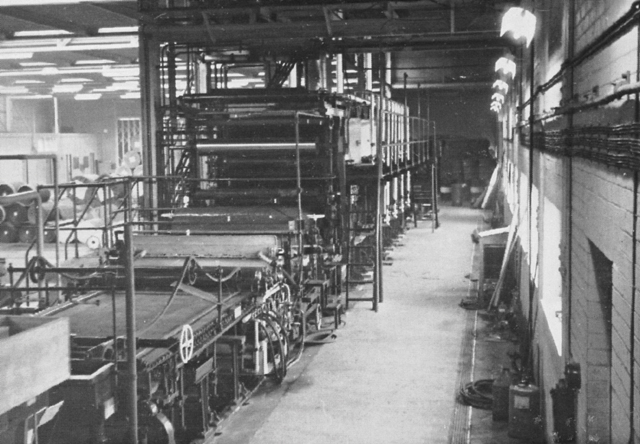 This short article has been penned specifically to chronicle the resurgence of the industry in the twentieth century, and so describe the two paper mills that operated until relatively recently: one, a veritable monster of a mill, and the other a reclusive speciality enterprise of which very few people have heard.

Following the demise of Houghton Mill in Spittlegate, outside Grantham, in 1888, there was a hiatus during which no paper was produced in Lincolnshire. Then, as the long Victorian era gave way to the Edwardian age, an enterprising businessman conceived a plan for a new mill to make newsprint for the burgeoning newspaper business. This mill proved to be a milestone, not only for the county, but for the entire country, because it signalled a revival in mill building; it was in fact the first new paper manufactory to be built in the UK for twenty years.

Joseph Dixon, head of Peter Dixon & Son, and one of the few notable characters of the papermaking establishment of this period, identified a site at Little Coates, on the vast West Marsh flats near Grimsby, as the perfect location for the new mill. The site was chosen specially for its proximity to the port facilities, by which wood fibre could be imported from Scandinavia, and its general transport infrastructure, particularly the railway, which made for easy transportation of fuel and other raw materials, such as kaolin clay.

Building work commenced in 1905 and the machines started production in late 1906, after a prestigious opening ceremony performed by Lord Northcliffe, founder and proprietor of The Daily Mail and The Daily Mirror.

The original mill housed two machines to make newsprint and general printing grades. Only six years later plans for expansion were unveiled, and two further machines were installed just prior to the First World War. These were followed a decade later by another two machines, at which point the product was advertised as being for both ‘home and export’ – the significance of the port is again obvious.

Sadly the head of the company, Joseph Dixon, died unexpectedly after an operation in 1927, so never lived to see the praise heaped upon his venture by the local populous. Nevertheless, over the following decades this vast six-machine mill maintained operations, during which it diversified into production of specialist wrapping grades alongside printing paper, which still formed its mainstay. However, the machinery was becoming out-dated, so, in the late 1960s management announced a bold venture to update equipment and introduce new products. Their most unusual purchase was a new paper-machine of radical design which had only been developed a decade earlier, and at this point only one was operating commercially, in Canada.

Plans were made to install the new machine, and scrap an old one, so they could continue as a six-machine site. A new de-inking plant was also built to enable the mill to recycle printed waste paper.

The new-look mill was unveiled in late 1969, and for a year things worked well. But life has a way of disrupting the best laid plans, and in paper mills this often takes the form of fire. The conflagration on 11th September 1970 damaged two machines. Although the mill ran on with four, losses mounted. In 1973 discussions were held with a range of interested parties to try and save the site, but to no avail; by late June the mill closed.

To all who have investigated the history of paper manufacture in Lincolnshire previously, this marks the end. Yet they are wrong. Dixon’s large mill was high profile; indeed, it had been a trendsetter earlier in the century, and near the end it again grabbed headlines in an effort to revive its fortunes with a bold high-tech investment. Meanwhile, in a little backwater, near Lincoln, a very different firm had, since the middle of the century, pursued a more secretive and low-key papermaking operation.

The Jointine Products Company started life in Cross Street, Lincoln, in 1929, where they impregnated pre-manufactured papers with different chemicals to produce gasket paper, which was sold to the automotive and engineering industries. In 1938 the company moved to Tanners Lane, Lincoln, then in 1953 a building was acquired in North Hykeham; by the end of 1960 the site at Tanners Lane was closed and the company was located solely at the new premises.

In the early 1950s the company built a pilot paper-machine, which allowed them to experiment with some unique papermaking chemistry. This success led to manufacture of a highly unusual eighty-inch wide paper-machine. Quality and reduction of waste were the main requirements in its design, because the chemicals used during manufacture of the speciality papers were both expensive, and made re-pulping of any waste difficult, if not impossible. Speed was therefore limited to a maximum of eighty feet per minute; at this time other mills, such as Dixons, ran paper machines at up to ten times this speed.

In 1962 Wiggins Teape acquired a controlling share in the business. They poured millions into the site over the next thirty years, culminating in 1991 with the installation of a huge coating machine to make thermal fax paper. Unfortunately this major investment never managed to secure the future of the site; losses mounted, and by February 1997 it was closed and the new coater was transferred to another mill at Cardiff.

Ultimately this site was also not profitable, and by 2000 it too closed. The thermal paper coater was dismantled, stored for a few years then re-erected in France; meanwhile the old gasket impregnation line, which had also travelled west to Wales, was sold to Terry Coffey, an ex-employee of Wiggins Teape. It was dismantled and re-erected back on the old Jointine site at North Hykeham, where the family-owned firm of Jointine Products (Lincoln) Limited, continues to make gasket paper today.

The paper machine at North Hykeham closed sometime before the late 1980s. It was certainly the last to operate in the county, but, being a most unusual machine and making very odd products, it is hardly surprising that its existence is not common knowledge.

Today paper manufacture is still performed at about fifty locations dotted around the country. Several mills still manufacture the grades made by Dixons, but on machinery three times wider and ten times faster; however, the ultra-specialised papers produced on the Jointine paper machine have all left the UK, and are unlikely ever to return.