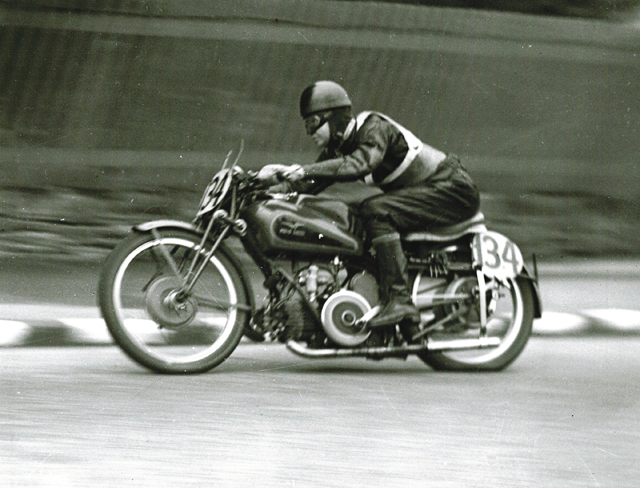 Austin Munks and Freddie Frith were both at the very top of their chosen sport of motorcycle racing either side of World War Two.
They were both born during the same year, 1909, with Austin coming from Leverton in the south of the county and Freddie from Grimsby in the north. Although Austin remained an amateur throughout his career, Freddie was to turn professional, with outstanding success. Later in their lives they both proved to be successful businessmen.

Austin was the youngest son of Mr and Mrs A E Munks, and his father was blacksmith of the Highgate. He was obviously always interested in speed, and started racing locally on grass and at proper hard tracks, Donington Park being the nearest. His first Isle of Man Manx Grand Prix victory came in 1933, when he won the Junior (350cc) on a Velocette – he had finished third in the Junior class on his Velocette the previous year. Three years later, in 1936, he was the first man ever to win the double, the Junior and the Senior (500cc) on Velocette and Norton machines respectively. After the war, in 1947, Austin was to secure his final Manx Grand Prix victory, winning the Lightweight class (250cc) on a Moto Guzzi, with an average speed of seventy miles per hour, setting a new record lap of 72.54mph.

Austin was not only interested in motorcycle racing, flying aircraft was another of his passions. He learned to fly and obtained his pilot’s licence in 1933. He owned his own aircraft, and flew it from a strip belonging to the Bowser family at Hurn End. He became friendly with Alex Henshaw CBE, a former test pilot, and they both used this strip.

Austin was to suffer a terrible shooting accident during October 1935. While he was out with an organised shoot at Asterby, one stray pellet was to hit him in his left eye, causing him to lose his sight from that eye. But this setback obviously did not slow down his racing brain, and he went on to notch up his remarkable double Manx Grand Prix wins the following year. After this he retired from racing, and of course the outbreak of the Second World War was soon to follow.

When the hostilities ceased he was to get itchy feet again and have a crack at the race he had previously not won on the Isle of Man, the lightweight class of the Manx Grand Prix. So he bought a motorcycle of Italian manufacture, a Moto Guzzi, and the only way he could get it back was to fly to Italy himself. So off to Milan he flew in his Auster aircraft and picked up the dismantled machine – a good story he could surely tell about that experience. The machine was re-assembled by his very good friend and mechanic, Sammy Coupland of Frithville, and the rest, as they say, is history.

After this he did finally retire from racing, and he was to sponsor a couple of local lads who were to make names for themselves in the sport. First it was R H (Dickie) Dale, from Wyberton. Dickie went on to win the following year’s Lightweight Manx Grand Prix (1948) on the same machine, Austin’s Motto Guzzi, setting an average speed of 73.36mph, and a new record lap of 74.36 in the process. Dickie was to go on and enjoy a successful career in the sport riding first for the Norton works team, then followed by spells in various continental teams, including Gilera, Benelli, MV Agusta, BMW, and Moto Guzzi (where he was especially noted for his rides on the 500cc V8 model) teams. Unfortunately he was to lose his life after a crash at the Nurburgring, Germany, in 1961.

Dickie was followed by Bernard Codd from Wrangle, who still farmed there until his recent death last July. Starting in trials riding, he also proved to be successful in the Isle of Man. Winning the Clubman’s Tourist Trophy double (350 and 500cc), he was the only man to achieve this unique double, during the last year these classes were held, 1956.

He was certainly a force to be reckoned with on the short circuit scene in this country. A serious crash at Crystal Palace the following year ended a very promising career. Unfortunately, he suffered a serious break to his right leg, and was bed bound for a year. The latest technology for treating such injuries had not reached these parts of the country in those days.

Frederick Lee (Freddie) Frith, was born in Grimsby, into a reputable monumental and stonemason family. Like his father, who was a keen motorcyclist, he had the urge for speed. He was to enjoy the sponsorship of Nigel Spring, of the Spring family from Brigg – famous for their jam and curd factory.

From 1936 until the outbreak of World War II he rode works machines provided by the Norton factory, and later, Velocette. He always held the reputation of being a very stylish rider, and gained such quotes from the press of the day as ‘chivalrous’ and ‘the Galahad in leathers’. His first ride in the Isle of Man was in the 1930 Manx Grand Prix, in which he was to finish third in the Junior race on a Velocette. His first win came in 1935, when he won the Junior (350cc) race – he had previously finished second to Austin in the 1933 Junior. The following year he turned professional and joined the works Norton team, with immediate success. He won, on his first attempt, the 1936 Junior Tourist Trophy, setting a new race record, and record lap at 81.94mph, making him the first man to lap the famous course at over eighty miles per hour for the Junior class. And he followed this up with a second place in the Senior (500cc) to his Norton teammate, Jimmie Guthrie. Later that season he was to go on to win the Junior (350cc class) European championship. The 1937 senior TT was to be a memorable race for Freddie; not only did he win it, but he was the first rider ever to lap the famous TT course at over ninety miles per hour (90.27mph) on his works Norton. By this time the German and Italian supercharged machines were becoming a real threat to the British manufacturers in the European championships, with George Meier winning both the 1938 and 1939 Senior class on his BMW. The 1939 Ulster Grand Prix was the last race before the Second World War intervened. In this Freddie finished second in the Senior class on his Norton, to Italian, Dorino Serafini, who was Gilera mounted.

During the war Freddie served in the army, at the infantry driving and maintenance school at Keswick, reaching the rank of sergeant. At the first TT after the war in 1947, Freddie had secured a ride on a Moto Guzzi in the senior class. But he was to suffer a crash at Ballacraine during practice, dislocating his right shoulder, and was unable to race. In the 1948 season Freddie was back on British machinery, this time Velocette. He went on to win the Junior class in the European championship that year.

In 1949 the World Championships, now known as Moto GP, was born. There were four classes for solo machines, 125cc Ultra-Lightweight, 250cc Lightweight, 350cc Junior and 500cc Senior, and one for 600cc sidecars. It was to turn out for Freddie to be his most successful season. He went on to win every round in the Junior class, including the Isle Of Man Tourist Trophy and became the first ever 350cc World Champion. He was to retire at the end of that season, winning his final race at the Ulster Grand Prix, and setting a new record lap speed of 90.60mph in the process. When Royal honours were announced the following year (1950), Freddie was honoured for his efforts, by being awarded the OBE for his services to the sport. This made him the first person ever to receive a Royal honour for motorcycling. Geoff Duke was the next to follow him, and receive the same honour.

Both Austin and Freddie were able to prove, beyond their motorcycling endeavours, that they could run successful businesses. Austin ran his motor garage at Leverton Highgate from the 1930s and was soon to obtain the very successful Jaguar car agency. He was later to add Daimler and later still Austin/Rover to the list. On his death on 29th January 1981, he left the business to his workers. He also had a collection of vintage motorcycles, his favourite being a 1939 Brough Superior. It was later sold at a Bonham’s sale to an American collector for £42,200, well above the £30–35,000 estimate.
Freddie also owned his own successful business, a motorcycle sales and repair outlet, run from the family’s original stonemason premises in Victoria Street, Grimsby, now unfortunately demolished. He was the agent for various leading manufacturers, including BMW, and was very successful for many years. He died on 24th May 1988.

These two true gentlemen have both been great ambassadors for their chosen sport and the county of Lincolnshire. We can only guess at what might have happened if the war had not interrupted their respective careers, but they have both left us with their own unique memories. The famous (or infamous) Isle of Man TT course certainly held no fears for either of these two intrepid Lincolnshire yellowbellies.