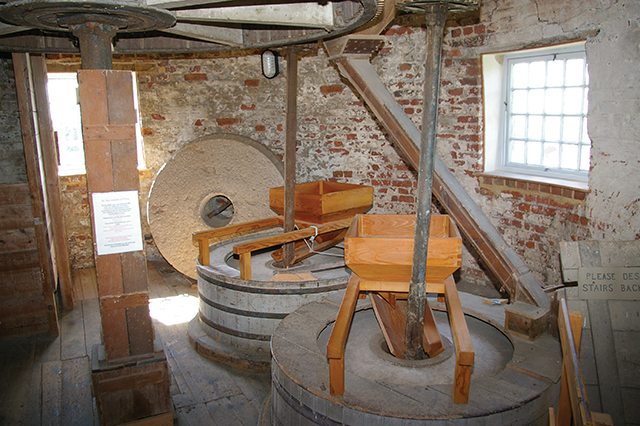 Moulton Mill is a village asset

At 100ft high, the historic building in Moulton, near Spalding, is the country’s tallest working windmill. Following an extensive restoration project led by villagers it has been open as a tourist attraction since 2005, and annually welcomes 25,000 people through its doors, whose support is vital to the building’s upkeep.

As well as guided tours the attraction boasts a traditional tea room in a converted granary and a well-stocked mill shop. There are also opportunities for visitors to have a go at milling themselves and enjoy craft exhibitions and other events, while more recently the venue has been licensed for weddings, hosting three prior to the first national lockdown.

Despite opening for only a limited period last summer, the mill continued producing wholemeal flour, which was sold locally in Moulton’s village shop. Volunteers have secured funding to invest in new equipment, which will enable them to widen the range of products they make and sell and they have collaborated with a number of educational institutions on a series of research projects too. They’ve also been exploring ways of bringing more traditional crafts back into the mill.

“We closed during the lockdowns, we had to as the majority of our volunteers are over 70 and many have pre-existing health conditions. We were prepared to take the loss financially rather than in terms of people and put them at risk. We wanted everyone to still be here when we are able to re-open,” explains mill manager Janet Prescott.

“We were able to open for a reduced number of days over the summer at the weekends, rather than our usual four, and were really well supported.

“The mill is a fantastic tourist attraction. We’re constantly trying to evolve and develop what we have here and look at other commercial infrastructure which can help us safeguard the building and its heritage.

“It’s a wonderful, hands-on experience – there’s nothing hidden behind a screen. People can come here and touch and feel things and experience mill life and that’s what makes it so special.

“There is a great community in Moulton, it really is big-hearted, and we can’t wait to re-open and bring all those visitors back.”

Moulton Mill operates two pairs of millstones – one powered by semi-automated machinery while the other relies on more traditional wind power.

The recent pandemic and research projects have led the milling team to look at ways of increasing the range of flour they produce and Janet says a grant from the Heritage Relief Fund will enable them to buy new machinery to increase mixing and sieving capabilities.

She added: “Combined with research work and our own sales, plus the emergence of interest in home baking during the pandemic we realised the need to change our mix and add to it.

“At present we’re only producing wholemeal flour. We don’t currently sieve our flour but we need to be able to so we can offer blended varieties as well as white and possibly rolled oats and porridge too. The new equipment will mean we can change from one grain to another more easily.”

The general upkeep of the Grade I listed mill costs around £20,000 a year, for which there is no grant funding – everything is raised by volunteers, supporters and visitors.

Janet says that fortunately many of the volunteer group are retired engineers who are able to help with routine maintenance tasks.

“They are a very skilled bunch and quite capable of doing all the routine work, while we are able to bring in millwrights for more specialist jobs. We are very aware of what we can do and when we need to complement that with expert advice,” she adds.

“One of the things we’re thinking about in the longer term is taking on an apprentice millwright, who we can pair up with someone to train them, which would help safeguard the building.

“Moulton Mill is Grade I, the same as the Tower of London – we’re a group of around 35 villagers in the middle of the Lincolnshire fens looking after it, it’s a huge responsibility.

“Most of our funds are self-generated – grants are not what keeps us going and we don’t get any annual funding. The only time we can get grants is if something big comes up, for restoration or something catastrophic.

“The whole building is a working machine and as with anything mechanical you have to keep an eye on it – when things go wrong here, it doesn’t just costs a few thousand or so, it always runs to hundreds of thousands.”

Now the country is moving towards loosening restrictions the mill team is looking forward to welcoming visitors again later this year.

“We all have a great desire to see the building back open and succeeding – there’s just something about it that draws you in,” adds Janet. “When it’s working it seems to come to life – like a living, breathing thing, and that’s what makes it so special – people can relate to it.

“It’s a great tourist attraction, it’s got a lovely tea room and a great mill shop with lots of new and different things. The visitors it attracts are a vital support to us, and the other businesses in Moulton, like the shop, pub and fish and chip shop that they support too, and we need to get them back into the village.”

Built in 1822, Moulton Mill’s four sails were removed in 1894 following a storm when they suffered irreparable damage. Flour was then milled using steam power and electricity. The building was mainly used to produce animal feed until 1995 when the third generation of the Biggadike family, who owned it at the time, retired.

In 1998 a group of villagers decided the building should be renovated and brought back into use – under wind power. They secured a 200-year lease from the site owner, formed a registered charity and launched a £1m programme to repair the building’s structure, reinstate the ogee cap and convert a granary building into a tea room.

The mill opened to the public in 2005, while the restoration work continued. In 2009 the outdoor reefing gallery was reinstated, and the sails replaced in 2011.

For more information about Moulton Mill and how to support it visit: moultonwindmill.co.uk