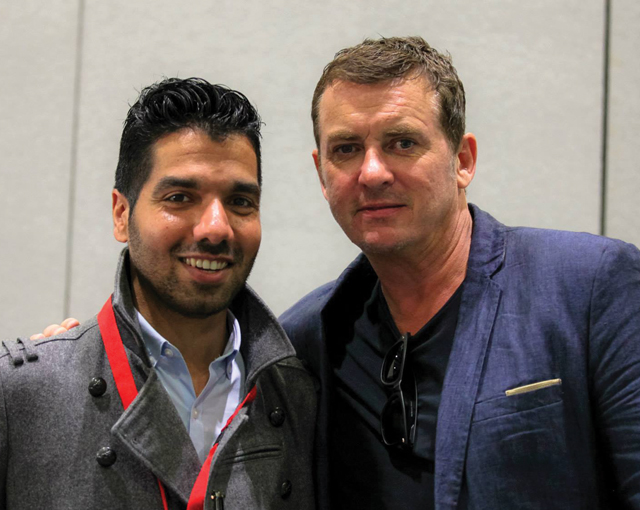 Naj follows the call of the screen

He may not have taken the traditional route into acting, but broadcaster, producer and publicist Naj Modak says his other roles have all helped prepare him for life on the big screen.
The thirty-seven-year-old, who grew up in Scunthorpe, admits that he’s always yearned to be a performer, but it’s only in recent years that he’s seriously begun auditioning for main cast parts.

In a short space of time his talent has shone through. Since 2010 Naj has appeared in several award-winning films and documentaries; a Bollywood blockbuster; the soaps Emmerdale and Doctors; a Stereophonics music video; Da Vinci’s Demons; and two films, both recently presented at the prestigious Cannes Film Festival.

“There’s been a creative influence running through my family since before I was born and one of my older brothers is a musician, professional photographer and has dabbled in acting,” explains Naj.

“I yearned for the opportunity to take to the stage from an early age, watching Bollywood films, watching my brother perform and, predominantly, continuing my family’s fascination with the Jackson family.

“I remember sitting around the television watching the premiere of Michael Jackson’s Thriller, building concert venues out of Lego and actually taking on roles myself, such as Trinculo in Shakespeare’s The Tempest at North Lindsey College, where I graduated in performing arts and music technology.”

On leaving college Naj gained a place on a media and performance course at the University of Salford, where he sought out as many work experience opportunities as he could.

“I volunteered for work, including making cups of tea for the model Caprice while juggling writing radio adverts, covering the Paddington rail disaster at Viking FM in Hull and getting a part-time job at its sister station Key 103 in Manchester,” he recalls.

“While I was at university I tried my hand at television presenting and I became hungry to learn the technique. Then I enrolled on a postgraduate broadcast journalism course with BBC Skillset, in Grimsby and Immingham, where I produced and presented high profile features internationally for television and radio.

“I worked in New York and Boston (USA), interviewed the nephew of Walt Disney and shared a dressing room with and interviewed the boy band 5ive when they were first famous!”

It was while trying to balance regular paid work with keeping his foot in the door to the media industry that Naj was offered a public relations job. During the last fourteen years he’s worked with all kinds of national and international companies, brands, celebrities and royalty.

But the call of the silver screen remained strong, and it wasn’t long before he decided it was time to get back into acting.

“I started thinking about acting again, as part of me kept thinking it’s something that I miss,” he says. “I didn’t always want to wonder ‘what if?’, or keep thinking about how far I would have got. So I volunteered for a workshop in Sheffield – I remember feeling terrified, as I hadn’t done it for ages, but it still gave me the buzz and I thought, ‘I need to get back into this’.”

While he was still working in communications Naj won roles in two short films in Bradford. Then in 2012, while he was between contracts, he bit the bullet and contacted a friend at a London agency.

“The timing was just right – I was between jobs, so I didn’t have to take any time off work, and I was put forward for a Bollywood film, which I got.”

The film was directed by the late legendary Bollywood director, Yash Chopra and went on to become a blockbuster.

“While on set, rather than sitting with the other actors, I was asking lots of questions at the right time, about how things work, and after that I really got the buzz for it. I registered on a few acting sites and background agencies – getting extras work to get back in. I then rang around agencies. I had a few auditions and chose to sign up with Imperial Personal Management (IPM) in Leeds,” explains Naj.

“Since then I’ve been working on all sorts of different things. I’ve been in Emmerdale and two films at Cannes. I would really like to be in a gritty action, or emotional, film. I work in TV a lot and I really enjoy it, but I would like to become diverse and take on challenging television and film roles.

“My long-term aim is to do as many different things as I can to expand my experience. I’ve done lots of extras work and volunteering, now I’m focusing on main parts. It is less work, but more challenging.”

Earlier this year Naj attended Cannes, where he had two films showing – VIII, a short film based around the Tudor period produced by a Leeds based production company Rossi Pictures; and Shongram, a feature film by Munsur Ali Films about a struggle for love and survival, based around the independence of Bangladesh in 1971.

While Naj is picking up more international parts he is extremely passionate about supporting and promoting local talent. He appeared in the The Grimsby Chums, a documentary film about a First World War Pals battalion of Kitchener’s Army raised in and around the town, and continues to attend the IPM Acting Academy as well as launching his own broadcast and communications solutions firm, Modak PR.

“I’ve been going to the Acting Academy for two years now. I wanted to start right at the beginning again and immerse myself in the craft of screen acting,” he says. “I do often work in London – there are lots of opportunities, but there’s also a lot of competition.

“My friends and family are here up north and there are many talented production companies right on my doorstep. There are lots of things happening up north too, with new programing in Salford.

“I have friends in London struggling to live; compared to their cost of living it’s not that bad where I am and London is only a couple of hours away. Besides, I like working with talent in north Lincolnshire and Yorkshire – I like to showcase what’s in this area.”

As for the future, Naj is currently producing a pilot for a new television show with Tony Knight, Australian TV’s celebrity dog listener; co-presenting a new show called Coast on Estuary TV; has just finished filming a music video and also acted in multiple roles using motion capture technology for a forthcoming action film. He has also been cast in a lead role in a sci-fi film.

If there’s one thing Naj has learnt as his star rises, it is to aim high and work hard.

“Don’t be afraid of change or taking a different route along the way,” he says. “But don’t sit and wait for opportunities to come to you – create them yourself. And whatever you do, enjoy it and have fun!”