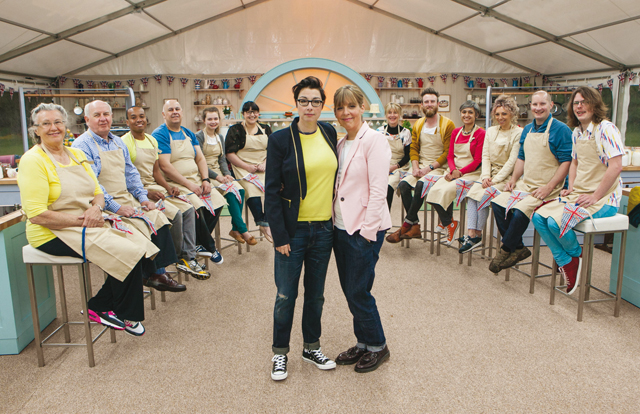 Nancy’s rise to the Bake Off crown

She’s already enjoyed the sweet taste of success after baking her way to victory on The Great British Bake Off and now Lincolnshire grandmother Nancy Birtwhistle is finding her star is truly on the rise.
The sixty-year-old has barely stopped since winning the BBC competition this summer, in which she wowed judges Paul Hollywood and Mary Berry with an impressive array of cakes, biscuits, puddings and pastries – and of course, a showstopping Moulin Rouge inspired windmill.

Thousands applied to take part in the show, and Nancy was one of just twelve to make it into the big white tent, where she completed thirty baking challenges before being crowned the winner over rivals Richard Burr and Luis Troyano in the final which gripped the nation.

Her no-nonsense attitude, homemade gadgets courtesy of husband Tim and unflappable nature made her a favourite with the viewers as well as the judges, with Mary Berry saying Nancy’s ideas inspired her too.

Now the programme is over for another year, Nancy, a former practice manager at a doctor’s surgery in Barton-upon-Humber, is trying to decide how best to share her skills.

“It’s all been really good, I’ve had a lot of cards and good wishes from people I knew years ago, which has been nice,” she says.

“I’ve also had quite a few offers of work, but not accepted anything – yet!

“I have been told I was quite a natural in front of the camera, but it’s all a new ball game to me – I’ve never done any of it, so I want to try everything.

“Whether that’s demonstrating, writing, or teaching…I think I would like to share the skills I have got and teach people.

“I am enthusiastic about baking and I would like to spread that around. Baking is not difficult but it can go wrong quickly, and it’s not easier and cheaper to go and buy something ready-made. You only need a small repertoire of recipes to get yourself going,” she added.

Nancy, a self-taught baker, had never entered a baking competition before, but decided to give the Bake Off a go after her daughter-in-law complimented one of her desserts and said she should audition.

“Baking can be fairly solitary, you are in your own kitchen and there is no one telling you if it is really good or not. I bake big family meals and I can sometimes be cooking for up to twenty people, and it’s a chance to put a little bit more effort in,” she says.

“I remember watching the technical challenges and I thought I could make Mary Berry’s apple strudel from series three, I wanted to have a go.

“I am self-taught, but I was so proud that I had learned to cover a cake in icing without any creases. As I knew I was going to be making my daughter’s wedding cake, I had been practising making sugar roses and even learning from YouTube! You have to keep trying, it’s no good just reading from a book.”

The hard work began for Nancy soon after finding out she had been accepted.

“That week we were sent an email telling us what the signature bake and showstopper for weeks one and two were, and then we received two more briefs per week for the next five weeks – we didn’t get them for the final though,” she recalls. “For that we were given eight days to come up with, and perfect, our recipes.

“It was quite hard coming up with two recipes per week – a signature and a showstopper. I have never written a recipe in my life, that was the bit I found most difficult, as we could not use anything out of a book or from the internet.

“It all had to be our own work, although with some things, like a choux pastry for example, the ingredients and method are basically the same; it’s playing around with the flavours and different presentation.

“I did learn something about myself during the show: that I did tend to keep a cool head. I’ve never worked under pressure before.”

One of Nancy’s favourite moments came in week one when she was crowned Star Baker, thanks to her showstopper Jaffa orange cakes, which Mary described as her pièce de résistance.

“That was the only time I got Star Baker. I was at my most nervous, and I was so pleased with the outcome, and everything went to plan. I also enjoyed my custard tart and chocolate crusted passion fruit tart with coconut filigree. I was so proud of it and Paul said he really liked it. That confirmed to me that I had a decent palate, because I thought it was lovely too.” says Nancy, who still bakes every day.

“I’m still learning techniques even now, and I can sometimes make a complete mess of things! When that happens you just start again, keep your patience and try and gain your confidence.

“I think pastry is my favourite. I like making bread, the only trouble is that it has a short shelf life, but if family are coming over I like to do big bakes.”

As for the final, it’s all a bit of a blur for the grandmother of eight, whose other hobbies include beekeeping, growing her own vegetables, rearing turkeys and cycling.

“I can remember having to stand for what seemed an eternity to hear the result,” says Nancy. “Then the judges said my name, and I can’t really remember what happened. Later I was asked how I was feeling in an interview, but I felt I didn’t have the vocabulary; it was all a bit of a fog.

“I had watched the programme before but didn’t realise how big the show is. To get positive feedback from Paul and Mary takes you to a completely different level. I have never had comments from people in such authority on their subject. It carries such a great feeling when the judges say your bake is perfect, it gives you confidence and a terrific buzz.

“Without any doubt whatsoever, it is one of the best things I have done in my life.”

One decision Nancy has made since leaving the tent is to support three charities which are close to her heart: Guide Dogs for the Blind, Lindsey Lodge Hospice, in Barton, and Cash for Kids in Hull.

And as for the rest, well it’s a case of watch this space – but whatever you do Nancy, Lincolnshire wishes you the very best of luck.

* Keep up to date with Nancy online at www.nancybirtwhistle.co.uk