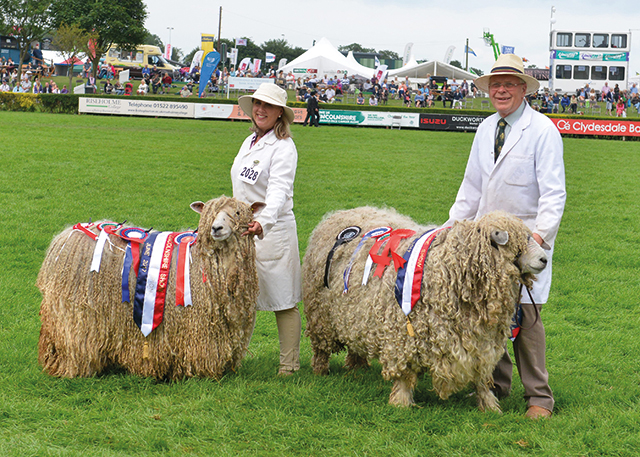 Caroline Bingham speaks to Louise Fairburn, Chairman of the Lincoln Longwool Sheep Breeders’ Association, to hear why this charismatic and crowd-pleasing breed is also one of the most endangered.
Louise and her husband Ian farm at Risby Grange and their flock of Longwools delight walkers who stroll past their pastures alongside the Viking Way. The association has been established for more than 125 years, an anniversary which was marked last year by an exhibition devoted to the breed at the Museum of Lincolnshire Life.

Forebears of the Longwool can be seen illustrated on the Luttrel Psalter and Lincolnshire market towns grew rich in medieval times through the trade and export of wool. A century ago Longwools were still predominant in the county, bred for their magnificent and then valuable fleeces, even exported around the world to establish bloodlines across the globe. The breed still holds records for the heaviest fleece, the most exports and the highest price paid for a ram.

Their valuable attributes have also contributed to their decline, with cross-breeding creating new strains such as the Corriedale; a Merino and Longwool hybrid bred for wool and meat production and still widely kept in Australia, New Zealand and the USA.

With only 800 or so breeding ewes registered in the UK, Longwools are perhaps the most vulnerable of the 64 native UK breeds. The Association has 100 members, not all of whom keep sheep, but their aim is to increase awareness of the breed, celebrate their pride in the heritage of Longwools and provide support through forums and shows to new owners.

Commercially their rare breed meat is used locally, by chefs such as Rachel Green, who buys Longwool mutton for dishes and cuts can be bought at Sunnyside Farm Shop. A project by the National Trust to promote grass reared meat will see hogget, raised close to Belton House by local owners Michael and Julie Coney, sold on their sites around the UK.

While the abundant average 8 kilo weight fleeces may only fetch £1 a kilo, the wool is popular for felting and crafts, especially in Holland and Eastern Europe. Shearling fleeces fetch particularly high prices, selling into Europe to designer rug, coat and clothing makers.

Ideally, to ensure the genetic security of Lincoln Longwools, the association would like to see the number of breeding ewes rise to over 900, better still to around 1,500.

New owners in the county and elsewhere are coming on board, attracted to the history and charming character of the breed. They are a new generation who get support and regular opportunities to engage with other owners via social media and events such as the Association’s regular gatherings, Lincolnshire Show and the annual Longwool Sale at Heckington Show. A forum on the Facebook page is particularly valuable. They view keeping the breed with more positivity than perhaps past generations for whom Longwools were simply no longer commercially attractive.

If you have a smallholding or are interested in starting out with Lincoln Longwools, you will find representatives from the Association in the Livestock sheds at Lincolnshire Show. They are a very friendly, knowledgeable group and will be more than happy to explain how you can begin.

THE AIM IS SELF-SUFFICIENCY
A family who joined the Association in October last year is the Lawsons from Helpringham. Sarah, Richard and their three children live on Corner Farm, a twenty-acre smallholding, on which they were already keeping a few pigs and building greenhouses. Sarah explained that both Richard and her family have local farming connections and for their livestock they wanted to keep breeds which reflected the county’s rural heritage. They were shocked and saddened to discover that the Lincolnshire Curly Coat or Baston Pig became extinct in the early 1970s, so their attention turned to the Lincoln Longwool as the last true Lincolnshire breed of sheep.

“We are passionate about locally sourced food and reducing food miles,” said Sarah.

“Our long-term aim is to produce food which can contribute towards sustainability of the local area. Although Richard works on the farm we cannot rely on it for all our income. I also work as a university lecturer.

“We have planted an orchard of mainly Lincolnshire varieties of apple and plums, the potatoes we grow are Sharpes Express (developed in Sleaford at the turn of the century) and we are starting a Marcury (Lincolnshire Spinach) bed to complement the asparagus. We also keep free range chickens for eggs.

“Whichever animals we keep, there has to be a commercial element to the consideration. We had done our research into Longwools but our decision to invest in our first ewes was driven by a flock dispersal sale last autumn. We already hold an agricultural holding licence and were lucky enough to buy seven ewes. Members of the Association have been kind and generous with their help and support. We hadn’t kept sheep before so it has been a learning exercise. We bought a ram from the Risby Flock and this spring we have raised our first six lambs. Each has been given a Lincolnshire dialect name and will be registered shortly in the Association’s breed records. The best animals we will keep for future breeding and the others will be reared for consumption by the family.”

Sarah is keen to find new outlets for the wool and will explore opportunities with local craftspeople. Raising the breed standard and enthusiasm for Longwools is the aim of all of the Association members and Sarah and Richard have already taken their first steps to gradually growing their flock.

A NATURAL CHOICE FOR OUR SMALLHOLDING
Kelly Grace and Duncan Archer bought their twelve-acre smallholding near Saltfleetby three years ago, making the decision to relocate to Lincolnshire from Kent to secure land of their own. It is a decision they have not regretted for a moment. They both have full time jobs but relish their life on the smallholding.

“We rent an additional ten acres and we already had horses, pigs, ducks and chickens when we bought six Longwool ewes just over two years ago.

“We had wanted to keep a rare breed and our location made the Longwools a natural choice. We contacted the Association and members were very supportive about helping us source our first animals. We bought a couple direct from flocks and then others at Heckington Show. We have our own ram and in the first year were lucky enough to breed several sets of twins,” said Kelly.

Both Kelly and Duncan acknowledge how helpful support and instruction from other Association members has been. Their neighbours, local farmers the Chapman family have also been on hand to answer questions any time night or day and helping out when Kelly and Duncan have needed it.

“Getting through the first year is probably the most challenging,” said Duncan, “after that your confidence builds and we now have a flock of thirty. The cold weather this spring has been difficult as Longwools lamb early. We moved the flock into the barn which we are also converting into our new home. They were sheltered in what will before long be our lounge!”

Duncan will provide a new barn for the livestock and would like to rent or buy more land in the future to grow the size of the flock further. “I would love to find some saltmarsh land on which to graze the sheep. The meat is already an amazing product which we consume ourselves and share with family and friends but salt grazing would add even more value.”

Kelly and Duncan have already had success showing their sheep and will be at Woodhall Spa and Lincolnshire Show this year to see if they can build on the rosette count.