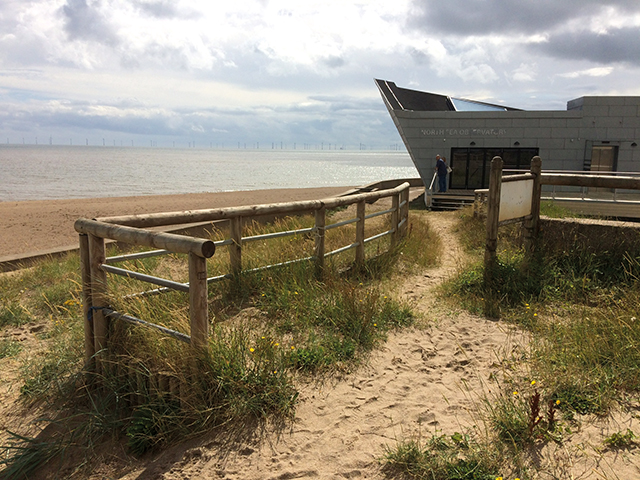 An eager group had already gathered when, last month, the doors were opened to the general public at the coast’s newest attraction: The North Sea Observatory at Chapel Point. Caroline Bingham was there to find out more.
The iconic building is the first purpose-built marine observatory in the UK and its dramatic architecture commands a prominent position above the concrete sea defences at Chapel St Leonards. It makes quite a contrast to the traditional beach huts alongside but they share similar views across the dunes and sea and an impressive vantage point from which to watch the birds and animals living along this coastline.

The project has been funded by Lincolnshire County Council, the Coastal Communities Fund, the Arts Council England and RDPE LEADER Coastal Action Zone creating a multi-function building housing the Seascape Café and public toilets as well as an art space which will host exhibitions, meetings and shows by local artists and groups.

Cllr Paul Hibbert-Greaves attended the opening as both East Lindsey District Councillor for the Chapel St Leonards ward and chairman of the Parish Council.

He said: “This will be a year round attraction for the benefit of all those who visit the coast and also bring valuable income into the local economy,” he explained. “Car park fees will raise revenue for the Parish Council and is one more step towards our ambition to become self-sufficient.”

The Observatory also includes a new base for the National Coast Watch station manned by volunteers. The public have a viewing window into their observation room as they look out to sea and along the beach to communicate any emergencies to the RNLI at Skegness or the Maritime and Coastguard Agency.

Cllr Colin Davie, Lincolnshire County Council Executive Member for Economic Development said: “The autumn to spring months are the perfect time to explore the wild, natural beauty of the county’s coastline and this new attraction provides the perfect base from where to begin a visit. The North Sea Observatory is a southern gateway to the Lincolnshire Coastal Country Park which presently extends as far as Sandilands. In the future this park will hopefully expand further north to include Donna Nook.”

“We have representatives from partner organisations here today including Lincolnshire Wildlife Trust, the RSPB, district and parish councils who all share our ambition to conserve and enhance this area for wildlife, the local community and visitors alike.”

Hikers, birdwatchers and dog walkers have long appreciated the tranquil countryside of the coastal fringe and the majestic qualities of the Lincolnshire skies and seasonal weather. The floor to ceiling windows of the Observatory offer 180 degree views of the beach, dunes and sea, and the wildlife which call them home.

The CEO of Lincolnshire Wildlife Trust, Paul Learoyd, was also at the opening and explained they have been working within the Country Park for the past ten years.

“The Trust bought land at Anderby Creek which is now the Anderby Marsh reserve. By establishing new marsh grazing grasslands and reed beds this has become a haven for rare breeds such as bitterns and marsh harriers,” said Paul.

“The area is rich in nature reserves, historic villages and footpaths across living countryside. This autumn will see the final linking of the mixed pathways which have been established to complete the Lincolnshire section of the England Coastal Path; the newest phase of the 2,800 mile route due for completion in 2020. This will make walking a path to Gibraltar Point much easier.”

Paul explained that part of the Trust’s mission is to change the public perception of the natural resources around us. More than 70,000 visitors travel to Donna Nook in the two months of seal pupping and Gibraltar Point attracts more than a quarter of a million visitors each year but public awareness of the wealth of other nature reserves within the county and other important environments is still ongoing.

“One of the most obvious features highlighted by the Observatory is the importance of the North Sea. Chapel Bay has a long fishing heritage and it is important to manage the area sensitively. The Humber Estuary is a protected area but we are working with other Trusts to work towards extending this from the Humber to The Wash. We want to make the public even more aware of the impacts of pollution and climate change and ultimately attain international recognition for the offshore area which includes the Silver Pit, a glacial trench which is rich in marine life.”

The abundance of marine life is also the reason why Chapel Point has been a focal point for thousands of migratory birds from Iceland, the Arctic, Siberia and North and South America, along the Lincolnshire coastline in spring, autumn and early winter, making the area a magnet for ‘twitchers’ and wildlife enthusiasts. Aside from the summer, February is the busiest month on the coast for this reason.

On a stormy day you might prefer to watch wildlife and listen to the breaking waves through the specially installed acoustics of the Observatory. The Café provides breakfasts and light meals as well as a choice of refreshing drinks and snacks to make you appreciate the vantage point it offers even more. There are plenty of information boards on the area’s rich natural history and a wall mounted model container ship gives clues to the cargoes of the sea-going vessels which can be seen from the shore.

Beach lovers, families, birdwatchers, hikers, cyclists and dog walkers will find The North Sea Observatory a welcoming new attraction, whatever the season, for your visit to the Lincolnshire coast. 