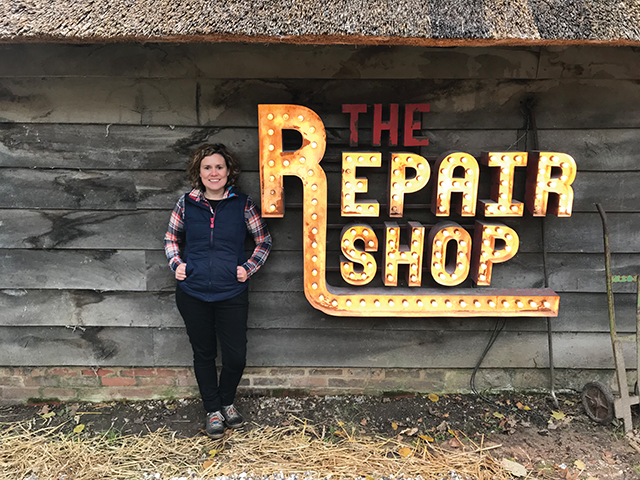 Upholsterer and furniture conservator Hannah Weston Smith is passionate about historical pieces and the stories behind them. She tells Kate Chapman that the chance to work on a primetime television series dedicated to their restoration and repair was an opportunity not to be missed.

Hannah, who runs her own business in Folkingham, admits she was a little surprised to get a call from the makers of the BBC show The Repair Shop, asking if she would be interested in working on a couple of projects, but after some gentle persuasion from her parents she decided to take the plunge.

Her painstaking work – helping to breathe new life into a leather armchair, a fishing tackle box and a gilt chair – was filmed in 2019, with the three episodes airing in spring and December 2020, and most recently January this year.

“I was a bit surprised when I got a call about the show but it was great to be involved – I did umm and ahh for a while before I said yes, but I’m so pleased I did, and so are my parents who are big fans,” says Hannah. “The general public are so interested in the people that feature and the emotional side of their stories; they cover such a wide range of items too – furniture, pottery, paintings and teddy bears.

“It was quite a learning curve working in front of the camera, having never done anything like that before. I had to work in stages and tell them exactly everything I was doing so they could work out what needed to be filmed, which often meant things took a lot longer than normal. There were several long days in the workshop, running from 7am to 7pm.

“I usually work alone, so it was great to be able to work alongside other craftsmen as well.”

Hannah grew up on the Nottinghamshire/ Derbyshire border, and as a youngster she was always drawn to the practicality of making things.

“I was a bit of a tomboy in that respect,” she recalls, “I was always making and doing things and it just kind of grew from there. We lived on an old pig-rearing farm and I turned one of the old sties into a workshop for myself. I made a workbench and other bits and pieces. I really enjoyed DT at school.”

Hannah originally wanted to be a firefighter but when her plans didn’t work out because she wasn’t tall enough she returned to her passion for making and completed a degree in Three-Dimensional Design at the University of Northumbria. She worked as a design technology teacher for a while, but after missing the practical element of her work decided to complete an MA in furniture conservation. After a stint training with another upholsterer just outside Henley-on-Thames, Hannah moved to Lincolnshire and launched her own business as a traditional upholsterer and furniture conservator in 2014.

She now has a stunning Grade II listed workshop a short distance from her home where she works on all types of English and continental furniture, particularly 18th, 19th and 20th century pieces, while her partner Sara Smith opened her interior design business, Smith and British, next door in 2013.

Among the upholstery services Hannah offers are full or part re-upholstery on traditional and modern furniture, recovering with modern fabrics, deep buttoning, frame repairs, French polishing and restoring church and pew seating.
“I do have a bit of an obsession with chairs – I think my most favourite pieces to work on are iron back frame chairs. These Victorian chairs have a base frame made from wood, but the top frame is iron, they’re hard to do as everything has to be hand-stitched, but it’s very satisfying. I also enjoy working on chaise longues too.

“My key skills are in traditional upholstery, working with horsehair and hand-stitching, doing all the traditional methods and true craft, rather than more modern techniques,” explains Hannah, whose portfolio includes work on pieces owned by properties such as Woburn Abbey.

“I work on a lot of older, antique pieces – anything from the Georgian period through the Victorian and Edwardian eras; pretty much anything, as modern-day foam was only really introduced around 70 years ago.”

Hannah, a member of the Guild of Traditional Upholsterers, received a call out of the blue asking if she would be interested in working on The Repair Shop. Hosted by Jay Blades, the programme involves a team of skilled and caring craftspeople rescuing and resurrecting items their owners thought were beyond saving. Together they transform priceless pieces of family history and bring loved, but broken treasures, and the memories they hold back to life.

The first project Hannah was tasked with working on was a French leather armchair.

“This chair had such an amazing story – it had gone from France, to Germany to this country and had even suffered bomb damage, but the owner still had it.

“I completed its restoration along with another expert, Suzie Fletcher, who worked on the leather, while I did the upholstery, replacing the side and fixing the cushion,” adds Hannah.

For her second project she teamed up with expert furniture restorer Will Kirk, on a little wooden fishing tackle box, with Hannah restoring the vinyl top and a piece of foam. Her most recent appearance was in January, when she took on the solo restoration of a stunning Italian gilt chair.

Hannah said: “It belonged to a lady whose parents had both died within the space of eight months, it was terribly sad. She found it in their house in Italy and brought it back here; she had memories of sitting in it when she was younger and wanted to honour her mother.

“It was a big repair job. The gilt needed restoration and repairing in areas, and the upholstery needed a lot doing to it. It was a lovely piece to work on.”

As for the future, with regards to the show, it’s a case of wait and see if any further suitable projects come up for Hannah’s skillset and in the meantime she is busy working her way through the restoration projects accumulating in her workshop. Despite the pandemic she has continued to be busy, although she admits jobs are taking longer as items need to be isolated before and after.

“Thankfully people have been so understanding that things are taking longer than normal – most just say, ‘well, it’s needed some attention for the past ten years or so, a few more months isn’t going to make a difference!’,” says Hannah, whose two wire-haired dachshunds keep her company while she’s working, “I love my job and it’s a real privilege to work on these pieces and help restore and bring them back to life.”

For more information about Hannah and her work visit www.hannahandnails.co.uk

Catch up on The Repair Shop on BBC iPlayer.