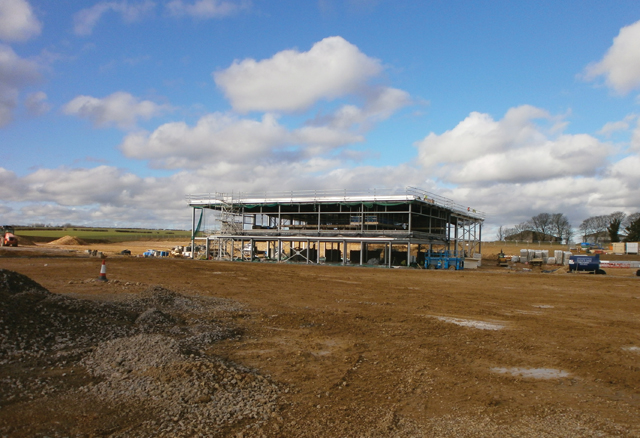 It may have been several years in the planning but it should only be a few months before the new sports facilities at New College Stamford are complete and Stamford’s football team, The Daniels, play at their new home.
Several years have been spent reviewing the plans but it is finally coming to fruition. Residents will no doubt have noticed the rapid rate of progress that is now being made on the site of the new stadium and sports facility off Ryhall Road. The whole complex is being built by the partnership of New College Stamford, Stamford Association Football Club and the Burghley House Preservation Trust.

Initially more than 120,000 tonnes of earth were moved to start the landscaping of the site. This was followed by the relatively speedy construction of the steel framework which will house the new sports centre – all of which was managed on schedule.

“It has taken some time to get to this stage in the development but in the eighteen months since our partners New College Stamford came on board, things have really moved forwards and it is fantastic to see the development coming on in leaps and bounds – and it’s all looking good,” said David Pennell, Estates Director at Burghley House and spokesman for the Burghley House Preservation Trust.

This development, which includes a new stadium and the relocation of the football ground from Kettering Road, was originally proposed by the Burghley House Preservation Trust.

“Our objective is for New College to move in on 1st September for the beginning of the academic year,” said Mr Pennell, who is analysing the time usage in order that all members of the community have access to the improved sports and leisure facilities that will be available at the site.

“The Sports Centre will prove a significant venue, New College Stamford will have an inspirational education campus and Stamford AFC has foundations for an exciting future,” said Stamford AFC Director, Guy Walton, who is looking forward to the move to the new ground.

“We are looking forward to moving to our new home but there is also a hint of sadness, based on our history and tradition at Kettering Road.

Many fans will have memories of going to matches over the years; after all the club has played at Kettering Road – or Hanson’s Field as it was then known – since it was first established in 1896, with the amalgamation of the town’s then two leading teams, Stamford Town and Rutland Ironworks. The time has come for change and we look forward to a new chapter at The Daniels.

We have to ensure the club has a secure future, and these new facilities will provide a foundation for the club to grow, especially as we are now an FA Community Club.”

This is the highest FA charter status level and demonstrates that the club has a high-quality, multi-team set-up with a clear development pathway. It also has to provide ‘excellent social, training and playing opportunities for all’, every bit of which will be readily catered for at the new ground.

The completion of the development at Ryhall Road later in the year is just the start and marks the beginning of a period of rejuvenation. The college’s current sports hall with be converted into ‘practical skills workshops’ while the stadium at Kettering Road will be the site of fifty-four houses which are being built by Burghley Estates on the promise of twenty new and affordable housing units on a site off Barnack Road. The new stadium and sports hall is just the start.

Mr Walton added: “We are now on the home run, there is a very positive feel in the town and a shared topic of conversation as our community realises, ‘it’s definitely happening’ and will soon be here.”