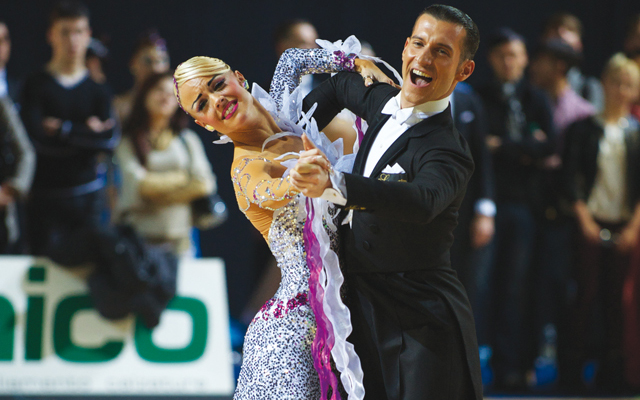 Having realised three of her lifelong dreams in the last twelve months, Joanne Clifton is on top of the world – and things are only set to get better for the Grimsby born dancer when she makes her debut on Strictly Come Dancing this month.
It’s been a whirlwind twelve months for the thirty-year-old: as well as winning the World Ballroom Showdance Championships with Italian partner Paolo Bosco, she’s also enjoyed a stint onstage and is now set to grace our television screens.

Joanne is thrilled to be joining the BBC One show, but says there will only be friendly rivalry with her brother and former dance partner Kevin, who was last year’s runner-up.

“When I was younger I always had four dreams,” says Joanne, who has spent the last fourteen years living and training in Italy.

“My first one was actually to be a lorry driver of all things, obviously that went by the way! But the others were to be a world champion dancer, to perform in the theatre, and to appear on television. I’m feeling really lucky as they’ve all come true in less than a year.

“Now I’m just really excited about Strictly. And as for competing against Kevin, it will be friendly rivalry. Obviously I want to beat him – but in a friendly way!”

Joanne comes from a long line of dancers – her parents Keith and Judy are former champions and run Clifton’s Dance Academy in Grimbsy – and her own love affair with dance started at an early age.

“I’m from a dancing family – my grandparents were dancers, my parents won all the major championships, even my auntie won all the titles too,” she says.

“Kevin is a year older than me, he started dancing and I just copied anything he did – I’ve always been in a dance environment.

“We used to go in our carry cots to mum and dad’s shows; we were with them all the time when they danced.

“My first competition was when I was about four, dancing two ballroom and two Latin dances. We’ve still got the video – I wore a little Alice in Wonderland dress, with the apron removed. You can see I couldn’t get the quick step right. We were doing competitions right away, but we wanted to do them.”

It wasn’t long before the siblings were following in their parents’ footsteps, winning numerous ballroom and Latin titles.

“I was always the one that didn’t really care; Kevin was that little bit older, and more competitive,” Joanne recalls.

“When we were kids, he would be really upset if we didn’t get the right results – I wouldn’t be so bothered. But eventually it got to the stage where we wanted to do different things.”

The pair went their separate ways in their mid-teens, with Kevin focusing on Latin, while Joanne concentrated on ballroom.

“We were still really quite young, but dancing Latin with my brother, trying to look smouldering during a rumba, it wasn’t really working,” she says.

“Kevin has always been better at Latin American, and I was more into ballroom. He was also very focused and I was a bit more flighty; I wanted to go to theatre school and try other things. So we separated, but when I saw him dancing with someone else I got quite jealous.

“In the end I decided to go down the ballroom route and got another partner, an English boy, which didn’t quite work out. Then I was watching an event at Blackpool and I saw this Italian guy dancing around and I said ‘I want to dance like that – with him!’

“After separating with my English partner we contacted this guy and he turned me down.”

Nevertheless, determined to pursue her dreams, Joanne enrolled at a top dance school in Bologna, Italy, where she partnered Marco Cavallaro for eleven years, winning more titles including British and Italian championships.

Then out of the blue she was contacted by Paolo Bosco, the ‘boy’ who had turned down her request to partner him over a decade ago.

“His partner had retired and he asked me to dance with him, so after eleven years, I finally got the boy I wanted and I danced for the last two years with him and we became World Champions in December.

“We were also European and Italian champions and won the World Dance Sport Games, which are like the Olympics.”

Paolo’s decision to retire prompted Joanne to consider her own future, and rather than teaming up with another dancer she also decided to quit competitive dancing.

“I was thirty and just thought, well, there’s no time like the present to try other things. And that’s when I was able to realise my second dream of dancing in the theatre – I joined a two-month tour of Burn the Floor in Australia and Japan.

“We had up to 4,000 spectators every night in the theatre – it was just amazing and everything I dreamed it would be.

“It was also a very different way of dancing. I was in school in Italy, the coaches were Italian and Russian, and everything was done down to the last degree, about how much you’re moving your body and extending, as it should be.

“On the stage it was freer – not so technical, more about the performance. I danced with Aljaz Skorjanec on Burn the Floor and during the first few rehearsals I wasn’t used to using my arms; in ballroom you’re in hold all the time, and I kept hitting him in the face.”

It was watching her brother and his fiancée Karen Hauer on Strictly that prompted Joanne to apply to join the show and now she can’t wait to compete for the coveted glitter ball trophy too.

“It will be friendly rivalry. However much we’ve travelled – I’ve been in Italy, Kevin’s been in America, our parents were in Grimsby – and however separated we are, we have got a really strong family bond, so we’d never really fight over something like this.

“It’s going to be fun. I’m single, so I’m hoping to be paired with a good looking, young, single sportsman or actor – that would be great! Even if it’s an older man it’s still going to be great fun – a new challenge for me to teach them to dance.

“I’m quite looking forward to the next chapter in my life – moving on to new things in my home country.”

There’s just one problem for their fans – deciding which of our Strictly Lincolnshire stars to vote for!