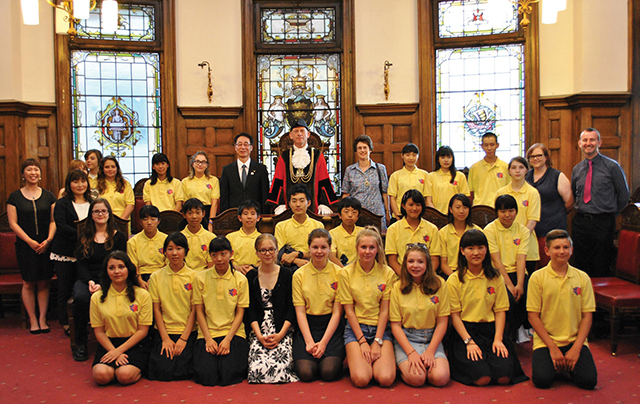 No barriers to Boston cultural exchange

Caroline Bingham visited Boston to hear about a cultural and educational exchange programme which links the Lincolnshire town with Hakusan City, Japan.
This was the first time I had come across the programme, which has been running since 1994, and I was meeting the current co-chairs of the voluntary group which organises the annual exchange visits, Clare Atkin-Palmer and Steve Jacobs.

They both have children who have taken part in previous years but one of the reasons for inviting Lincolnshire Life along was to ask our readers if they or their offspring have been involved? As well as wanting to publicise the opportunities the programme presents, Clare, Steve and their fellow committee members are trying to put together a history and archive of the exchange to mark its 25th anniversary.

Boston’s links to the USA may be more familiar, but how did the Mikawa Project, as it was first known, begin?

“It started with a conversation between Mr Miyazaki, a Council Officer in Mikawa, and a Boston student studying in Japan in 1994,” Clare explained, “which over subsequent years established firm friendships and links with schools in both countries.”

In May 2002, a more formal Sister City Agreement was made between Boston and Mikawa. In 2005 Mikawa merged with other towns in the region to form Hakusan City and hence the modern day name of the exchange programme. The programme alternates, with students from Japan visiting Boston in July and students from Boston making the return visit the following year. Students stay with host families, spend time in local schools and have an immersive experience of Japanese or British culture.

“In Boston the programme is run by volunteers and is self-funded, while in Hakusan City it is organised by the International Association Office, a branch of the City Council, who also fund the majority of the cost. In Japan it is a competitive process which carries great status, to be selected to take part.”

Eligibility to apply in Boston comes from being educated in the town, attending a local club or having parents who live or work in the town, or within a ten-mile vicinity. Travel is self-funded, although there is a range of fundraising activities which averagely bring this contribution to within a few hundred pounds.

“We aim for twelve students and two chaperones to represent Boston when we visit Japan,” Steve said. “Their ten-day trip costs around £2,500 but the children and their families, advised by our committee, organise car boot sales, race nights, supermarket bag packing, tombolas and other events to cover all but about £600 of this. We have great support from local schools and organisations such as the Sasakawa Foundation, Robsons of Spalding, Morrisons of Pinchbeck, The White Hart, Howdens, Boston Market Stall Holders, Fesa, Georgians, International Lincs Committee, Maudes the Jewellers, Boston Aerodrome, Shepherds Bakery and THS Financial Services. Each has been highly supportive in the past. We do not want financial hardship to be a barrier to pupils or host families taking part.”

Giles Academy at Old Leake is a long-term supporter as well as Boston High School, Tower Road Academy and Boston Grammar with pupils taking part as well as welcoming exchange students into the school. There is a Japanese Garden in the Giles Academy school grounds which celebrates this connection. In Japan, tribute to the enduring friendship is marked by an oak tree and engraved plinth within a community known as Boston Gardens, where the layout and architecture reflects an English village.

In July 2018, twelve Japanese students and their three chaperones visited Boston and enjoyed a wide programme of activities. They spent time in local schools, enjoyed a traditional afternoon tea at the Ridge Rooms, performing arts at Blackfriars, went kayaking with Boston Canoe Club, tucked into Tate’s fish and chips and climbed Boston Stump. Their visits further afield included trips to Lincoln and Burghley House. Host families also get a free weekend to do their own thing and can take their guests on a short break if they choose. A first in 2018 was a trip to the We’ll Meet Again WW2 museum at Freiston which was greatly enjoyed by all students. The owners are also supporting the Tea for Victory: 1940s Tea Dance fundraiser which will be held on 27th April at Hubberts Bridge Community Centre.

A tradition which is long established is that students are invited to give a performance at the farewell party, which in 2018 was hosted at Fydell House. These often include dance, poetry and musical renditions and are hugely enjoyed by all the families.

The friendships made can be enduring. Language does not seem to be a barrier.

“This is an experience which cannot be bought on the High Street. I and past families have remained in contact with their exchange family for many years now,” said Clare. “The Japanese culture is fascinating and we have regular meetings with students and their families to prepare them for their visit. Of course, many students have a common interest in computers and gaming, which overcomes the language barrier, and Steve’s son has remained in touch with his Japanese student through a common third language, French.

“The Boston/Hakusan Exchange is a truly unique experience that is developing many meaningful and enduring friendships with our Sister Community.”

Boston will also have a new Friendship Circle of maple trees and oaks with commemorative plaques in English and Japanese located at Jenny’s Wood, Wyberton. This has been sponsored by local businessman Adrian Isaac and further celebrates the 25th anniversary of this exceptional exchange programme. This summer twelve Boston students and two chaperones will be travelling to Hakusan to enjoy an equally wide programme of cultural and leisure activities.

Presentations to potential candidates for the 2020/2021 programme are now being made to interested Guide and Scout groups, clubs and schools to young people who will be entering Year 8 and 9 in September 2019. Further information please email bhcexchange@outlook.com

As Clare and Steve look to record the history of the exchange, if you have any photographs or memories that you are willing to share as a previous participant of the Boston and Hakusan City Exchange please contact: bostonhakusanhistory@hotmail.com