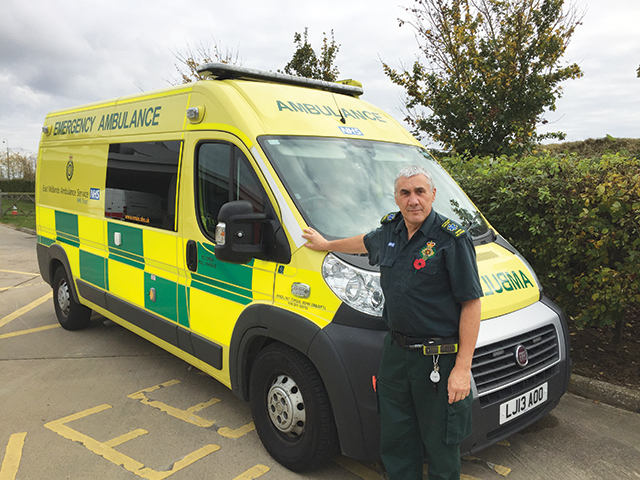 No two days the same

It takes a special kind of person to devote their life to helping others, but that’s exactly what Tony Fell has done as Lincolnshire’s longest serving ambulanceman.
Tony joined the service back in 1977 and went on to become Spalding’s first paramedic in 1991, and during the course of his forty-year career he’s also worked on the county’s air ambulance, in the control room and assisted on an overseas aid mission.

Over the years he’s attended thousands of emergencies, helped countless patients, delivered five babies en route to hospital and witnessed enormous medical advancements, but he takes it all in his stride saying he is blessed to have the best job in the world.

More recently he’s stepped down to the role of emergency care assistant based at Holbeach, but nevertheless is still on the front line offering assistance to those in need.

“I’ve felt it’s been more of a calling than anything else,” says Tony (62), who is married to Susan with whom he has two children.

“We are there to help people in their time of need; regardless of their age, gender, race, the richest to the poorest; we administer to everybody and it’s just been a tremendous privilege to serve the community.

“It really is the best job in the world – it can be quite demanding but somehow you manage to cope, my wife especially is very understanding. Looking back it has all gone so quickly, but it has been the most fantastic, tremendous experience.”

Tony, who has always lived in Spalding, believes joining the ambulance service was a calling and looking back remembers several incidents during his youth which drew him to it, including helping a lady who was knocked off her bike.

He and his sister also used to take wheelchair patients from the Johnson Hospital to chapel on Sunday mornings, which gave him his first experience of hospital life.

“My dad was a firefighter, so growing up the house was always full of his equipment and uniform. He used to get called out and we’d be told to get out the way, Dad’s going on a shout!

“I was quite a shy lad, I worked in Tesco at the time, but I loved the interaction of working with the customers, it really brought me out of my shell. A friend who took our wedding photographs, who happened to work in the service at the time, asked me if I’d thought about joining and told me there was a place coming up, so I duly applied and was eventually offered a job,” he says.

Tony started his new job on 5th September 1977 after a six-week training course at Leicester learning basic first aid. Technicians and paramedics did not exist at this point and the service had a dual role attending emergencies and transporting out-patients to hospital appointments.

Tony says it wasn’t uncommon to receive an emergency call on the way to the hospital, which often meant out-patients were stranded for hours while waiting for the crew to deal with a life or death situation. Like all his colleagues, he can still remember his very first job – transporting a body to the mortuary. Over the years his role has evolved due to changing techniques and technology; as well as learning to take a patient’s blood pressure, ambulance crews also had to be taught how to use the latest innovation – a pen torch.

“The very first piece of equipment that veered away from the normal splints and bandages was a pen torch –it was a big political issue back then,” smiles Tony.

“We had to go on a special course to learn about the workings of the eye and then when we’d completed it we were presented with our pen torch!”

During the mid-1980s crews learnt to administer ECGs and defibrillators too and in 1991 Tony put himself forward for paramedic training so he could help people even more. After completing a three-month training course covering more invasive procedures he became Spalding’s first paramedic.

“The thing about this job is that no two days are the same – it’s very varied. I served with the air ambulance for three-and-a-half years as well after putting my name down to be considered. I had to go through a selection and fitness process, but got on absolutely brilliantly. We were going on similar sorts of jobs, but just getting people to hospital more quickly. It was a wonderful time. I was seconded for one week per month. I really enjoyed it and was sad when it came to an end.”

As well as taking to the skies, Tony also spent seven years working as a despatcher in the control room, another role he thoroughly enjoyed. And in 1993 he took part in Operation Angel, with a team of healthcare support workers in Bosnia evacuating people from the wartorn area of Mostar.

“We were over there for a couple of weeks, it was quite an experience. We had to retrieve the casualties at Mostar and transport them down to Split where they were airlifted out. Obviously they were suffering a lot of trauma, but it was also mental trauma due to what they had been through. It was terrible, you just felt as though you wanted to give them all a hug,” he recalls. “That’s the thing about this job, every day is different and despite being given the information, you never know what you’re going to find when you arrive at a job.

“A couple of incidents that particularly stand out include one where an old lady was driving through Dowsby Fen where a herd of cows were crossing the road. As she turned out of a roadway she went straight into them and killed three calves. It was quite a peculiar site when the headlights picked out the collision.

“Another strange call we had was to attend a couple who had been attacked by an over amorous ostrich – they were leading him to meet a female and he got a bit excited and trampled them, fortunately they were OK,” he adds.

Tony marked his 40th anniversary with a small celebration with family, friends and colleagues and plans to continue working at least until he’s 66, if not longer.

“Time has gone so quickly, I think that’s because I enjoy the job, it’s just been amazing,” he says. “I have seen many things, many which have moved me to tears – tragedies and happy endings – and you draw strength from that, you have to. It helps you to cope and move on to the next job. I am so lucky to be doing this; it really is the best job in the world.”