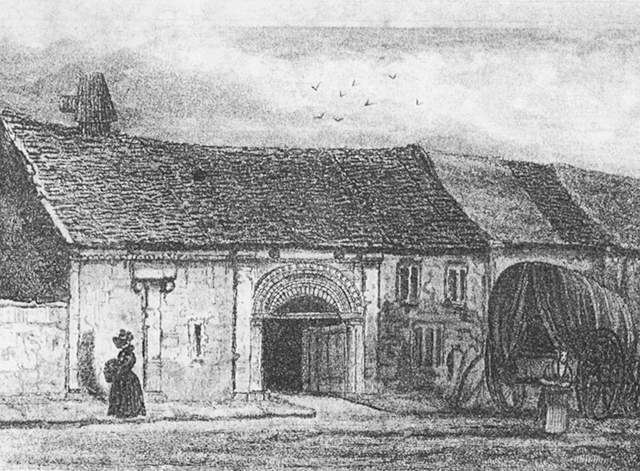 St Mary’s Guildhall stands on the High Street in Lincoln at its junction with Sibthorp Street, just to the north of St Peter at Gowts Parish Church and vicarage. It was a domestic complex on a palatial scale indicating the highest social status, writes Alan Middleton.

It is now believed that the Guildhall was built as a royal palace for Henry II, completed in 1157 and where Henry had a crown wearing or second crowning. This ceremony took place in 1157 when Henry visited the city at Christmas.

The property was later owned by Henry III who used it for wine storage. Henry III disposed of the Guildhall to his butler, Michael de la Burne and in 1251 de la Burne sold it to the Guild of St Mary in Lincoln. It remained in the ownership of the Guild until 1547 when it passed to the Lincoln City Council. Until 1614 it was leased to various tenants, but in that year it was leased to the newly established Lincoln Christ’s Hospital Blue Coat School. This lease continued until 1633, although the school had moved to a new site on Christ’s Hospital Terrace in 1623. Subsequent leases were to the Fawkes family, who sub-let parts of the property.

In 1815 it was leased to Coningsby Waldo Sibthorp MP of Canwick Hall and the lease shows that the northern part of the property was used for malting. Following the Municipal Reform Act of 1835, his son Charles de Laet Sibthorp was able to purchase the Guildhall and the paddock behind for £455.

The paddock behind the buildings was the first home of Lincoln City Football Club from 1884 to 1895. Gradually the Lucas family of builders, who were also involved with St Peter’s church, took over the leases and it was still used as a builder’s yard until 1981.

The maltings had earlier been leased to Warwicks and Richardsons. Two early houses which formed part of the palace were demolished in 1896 to make way for Sibthorp Street. In 1930 the building was scheduled as an Ancient Monument. Following the death of Coningsby Charles Waldo Sibthorp in 1932 an appeal was launched but the City Council eventually bought it in 1938.

Restoration took place in the 1980s after Lucas the builder’s had left. The Guildhall is currently used as the offices of the Lincoln Civic Trust and St Peter’s church hall.

190/191 HIGH STREET
The bank of Peacock, Handley and Kirton was founded in 1792 in Sleaford. The name of the bank was changed a number of times and it became Peacock, Willson and Co in 1861.

In 1895 the bank was operating from quite charming premises on the High Street in Lincoln, just south of Swanpool Court, a building also occupied by Cuthbert Wilks, a chemist. By 1897, Wilks had gone and the bank could be found in a magnificent new building on the same site.

The architect was William Watkins and he prepared sixty or seventy full-size drawings for Doulton’s of Lambeth who carried out the work, including the elaborate terracotta front. Inside, the main rooms were decorated with very fine plaster ceilings.

The bank is no longer there, having merged with Lloyds bank in 1912, but the building remains, having had a variety of different uses. When I was a young man it was the very popular ‘Welcome Cafe’.

Later it became the showroom for the East Midlands Electricity Board. More recently it has been used for fashion retail, first by River Island and now by Jack Wills. It is a wonderful building and attracts visitors from far and wide to see, among other things, the gargoyles in the stonework, which are said to be very rare.