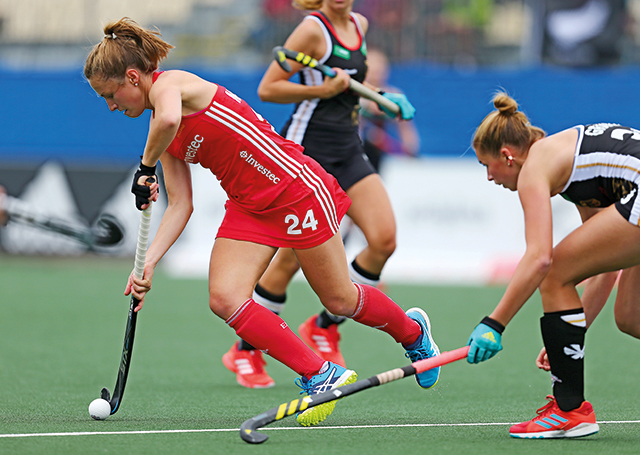 One of Shona McCallin’s toughest assignments since winning gold with the Great Britain women’s hockey team has been to keep hundreds of children inspired about sport, she tells Rod Gilmour.
When the GB women won the Olympic title for the first time on that glorious night at the Rio Games two summers ago, the squad said collectively that they would give back to the game which had so helped them achieve history in Brazil.

Players have travelled the length of the country to, as they put it, “inspire the next generation”; be it school visits, coaching clinics, talks at clubs or opening new pitches.

Lincolnshire born Shona McCallin, regarded as one of hockey’s best attacking midfielders, has delivered her own off-pitch projects – and believes it has helped shape her as an individual as she gears up for another key competition, the Vitality Hockey Women’s World Cup which begins in London on July 21st.

Away from the pressures of the team’s training base at Bisham Abbey in Buckinghamshire, the 25-year-old signed as an ambassador for Inspire +, a Grantham-based sports charity.

Her role involves visiting around fifty schools in the charity’s local network to deliver her story to schoolchildren in a “really relatable way” through assemblies or hockey coaching.

“In terms of developing my skills as a person it has massively helped me confidence wise and speaking to people,” she says. “Kids are great but they are cut-throat! If what I am delivering is boring them, they will sit there and yawn in front of you and start looking around.

“You get instant feedback from them and it’s also a challenge to keep them entertained. I might have kids who are 4 years old and into their fourth week of school or classes of 11-year-olds and you have twenty-five minutes to keep them engaged.”

Her work in 2016 focused on her Rio journey, while the last twelve months have been in line with a government initiative on how children can deal with pressure.

“It’s about thinking outside the box and how to be creative and the way you talk to them,” she adds, “kids give me a lot of energy and some of the things they say are priceless. It certainly refreshes me as a person.”

However, she admits that she’s lost count the amount of times a child has put their hand up to ask her where she got the gold medal from and where she won it.

“I think to myself that I’ve just spent twenty minutes explaining it to you and they ask me that!” she laughs. “I also get asked if I play ice hockey. It’s the younger kids on the front row who come out with the best questions, as well as what they had for dinner the evening before.”

Having spoken to so many children in the last two years – she sometimes visits up to four schools in one day – Shona has one message she always tries to convey.

“I get asked when was the first time I tried hockey. I started relatively young, aged 6, but there are girls who have achieved more than I have on the international stage who started when they were 12 or 13.

“It’s not a case of being able to start young to succeed. The question is whether you are willing to commit to it, to carry on when times get tough and demands are pulling you here, there and everywhere as a teenager.

“There’s a huge drop out in all sports between the ages of 14 and 18, so it’s about the mindset and the sacrifices you want [to make] to succeed in life.”

One senses that when Shona hangs up her stick in a decade or so, the next phase of her career will be mapped out following these off-field experiences.

For now Shona, a former Kesteven and Grantham Girls’ School pupil, has a role feeding the likes of forward Alex Danson, the current captain, and working tirelessly in defence. There’s also no doubting that her time in the Netherlands, where she studied at Tilburg University and played Dutch club hockey in the world’s best league, helped her immensely.

Yet it’s her upbringing in Lincolnshire which has, she says, propelled her to the international stage. Whenever she can, Shona will drive the 140 miles back to the sleepy village of Dry Doddington, near Grantham.

And she admits that it’s hard not to be rekindled with her childhood and Lincolnshire’s great outdoors. “Living so rurally we were outdoors the whole time, be it hide and seek, or playing football with my cousin,” said Shona.

“The fact that my parents were active in getting us into sport and using up all our energy swimming, football, netball or cross country, it has set me up to become the athlete I am today.”

While Shona and her older sister were home, her parents, Wendy and Ivan, both worked hard on the family farm. Home-based roles also meant flexibility and being able to take their children to sports clubs.

“Summer was incredibly busy so we never went on holidays then, as the farm was manic,” admits Shona. “It was always about hanging around, seeing if there were any jobs, or playing with my cousins outside.

“I still love going home and it’s the small things which count. I don’t have to factor in an extra thirty minutes to allow for traffic, because there is none.”

For this year’s World Cup, on the back of hockey’s rise in popularity, tickets for all of England’s matches at the 10,000 capacity stadium on the Olympic Park have already sold out.

Shona says that women’s sport as a whole is on an upward trajectory following the rise of the England rugby, football and cricket teams.

“It has been a snowball effect if you look at the massive success in women’s sport over the last five years, either individually or team sports,” she adds.

“People are beginning to realise that you can’t ignore women’s sports’ prominence. It makes people see women’s and men’s sports more on a parallel than say ten years ago.”

With Olympic gold already banked, English hockey has claims to be leading the way. World Cup glory for McCallin and Co will only enhance that.”