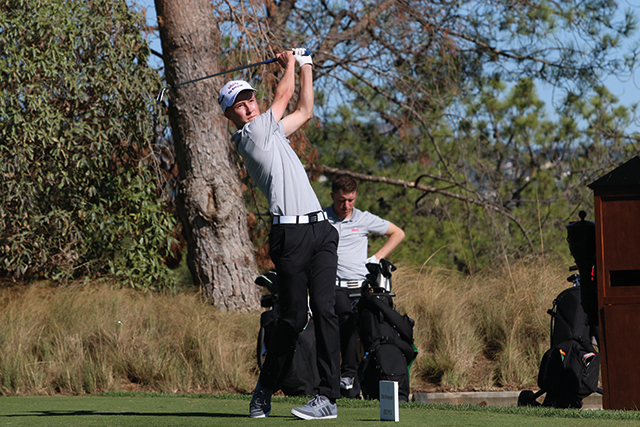 On course for England squad

He’s gained valuable experience on courses up and down the country as well as overseas and now teenage golfer Charles Petrie tells Kate Chapman about his ambition to gain a place in the national squad.
Charles started playing golf with his Dad when he was just 4 years old and thanks to his dedication, hard work and natural talent he’s hoping to build on his latest success of playing in the 2017 Telegraph Vitality Junior Golf Championship in Portugal.

The 18-year-old, who lives in Stamford with parents Bruce and Rachael and his twin brother George, spends up to seven hours a day on the golf course when he’s training and fits this in around his studies at Uppingham School, in Rutland, where he’s working towards A-levels in French, mathematics and philosophy.

“What I like about golf, what’s unique about it for me, is that you can play so many incredibly different venues,” says Charles, who hopes to gain a place at an American university to complete a degree in philosophy or French literature.

“When you play tennis you are just on the court, with golf there are so many wild and wacky places to play, with wonderful scenery and that’s what I enjoy, the challenge and diversity.

“You also get to meet a lot of great people too; I’ve met some great players and there is a good social side.

“Hopefully when I am studying in America, I’ll be able to play a lot of the big American courses – and if things go well then possibly go pro.”

Charles, who is currently making the move from competing in boys’ tournaments to men’s has always been a fan of the sport, even from an early age and credits his Dad with encouraging him to play.

“I initially played at Skegness, my Dad is quite a keen golfer, although now it’s more a hobby for him, he played a lot more when he was younger,” says Charles, who has a scratch (zero) handicap.

“So it started off that I would go with him and golf was something that he could teach me and that we could do together.

“I played in some local and smaller tournaments and then started playing more competitively, and then nationally when I turned 14.”

A regular player for the Leicestershire and Rutland county teams, Charles was also one of eight elite young players selected to represent the British Swifts golf team on a tour of America in 2016.

Last year he competed in events including the British boys’ championship held in Scotland, the English men’s amateurs and Midland Youth Championships, which he says were all positive experiences.

He was also thrilled to gain more valuable experience in the 2017 Telegraph Vitality Junior Golf Championship, which took place at Portugal’s prestigious Quinta do Lago resort, where he was among the cream of young golfing talent from the British Isles and Ireland, playing on the highly acclaimed North Course.

“I felt as if I played well out in Portugal, but I did struggle a bit on the green, nevertheless I had a great week and learnt a great deal, watching some of the best players in the UK,” he says.

“There were a lot of TV cameras there, so it was also about learning to compose myself when there was a bit more pressure on me.

“It was a great experience and will be useful for the future, both in terms of big amateur events and professionally.

“At the moment I am transitioning from boys’ competitions to men’s, which is quite a big step up. There is quite a big difference between the two and the standards really shoot up a level.

“Playing men’s you really cannot afford to make a lot of mistakes – you need to make sure you are more consistent.”

For Charles training never stops – during the off season he practises as much as he can at the weekends, while trying to keep on top of his studies. During the summer he plays every day, and if not competing in a tournament will probably be on the fairways for six or seven hours per day.

Thankfully his family, school and friends are incredibly supportive.

His local course is Luffenham Heath, near Stamford, where he regularly plays and he also travels to Sleaford to train with his coach Andrew Hare. On top of that he does strength and conditioning work too.

As for the future, Charles is hoping to emulate some of his favourite players who include South African Louis Oosthuizen and Francis Ouimet, an American amateur, who is frequently referred to as the father of amateur golf.

And as for courses, he’s got his sights set on some of the best.

“I’d love to play the classic Augusta, where they hold the Masters, and I watched the Open at Chambers Bay, Washington, that’s another one I’d like to play – it just looks like a really incredible background,” he adds.

“As for the coming year I’ve got a lot more men’s events lined up, potentially the English amateurs and some other bigger ones too.

“It’s all a learning experience for me at the moment; I’m just trying to take away as much as I can from each event and looking to the future the hope is turn pro.”