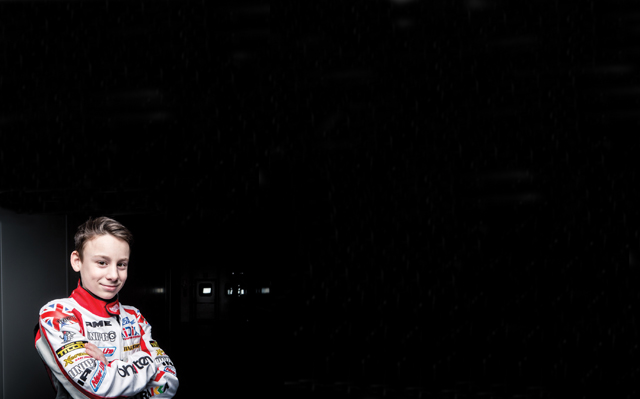 On the grid for Formula One

Many schoolboys dream of growing up to become a racing driver – but Teddy Wilson is already well on the road to fulfilling his ambition.
The fourteen-year-old is the current Super One MSA British IAME Cadet Karting Champion – a title his own racing hero Lewis Hamilton won back in 1996 – and at the time of our interview was two-thirds of the way through his first season racing in Europe.

Teddy, who splits his time between Whaplode St Catherine, near Spalding, and South Luffenham, in Rutland, when he’s not racing abroad, first got behind the wheel of a kart when he was six – and has been hooked ever since.

“I used to live in France and my Dad used to race when I was young. He got me a kart when I was seven and we’d just got to the local track and I really enjoyed it,” he explains.

“I always knew I wanted to do racing; the first time I got in a kart I really liked the speed, the adrenaline – everything! And it just grew from there.

“When we moved back to England you have to get a licence and I passed my test when I was eight. I was going every weekend that I could. I’d go to all kinds of competitions around the country and it got to the stage that I was winning everything and I started moving up the levels.

“This is only my first year racing abroad, but it’s been really good so far.”

For the 2015 season Teddy raced with team Strakka Racing Bhai Tech, competing at circuits in Portugal, Italy, Sweden and Belgium in the KF Junior category for drivers aged twelve to fifteen years old.

In his first main final he was placed third, he was fifth in the second and then crashed out of the third when his kart was clipped and he ended up spinning across the track.

“I’m away every couple of weeks; so far this year I’ve raced in Italy, Portugal, Sweden – mainly four-day events, although I come out for testing a couple of days before, which makes each meet around six days,” he explains.

“My school, Uppingham Community College has been really supportive – because I’m taking so much time off to compete, I just have to go to the teachers and ask them for extra work to take with me.

“I have a computer with tasks on which I’ve been set. It can be quite hard teaching yourself some of the stuff, but I know that if I want to keep racing I’ve got to keep my grades up.

“My schoolfriends came to watch me race in the European Championships in England – I don’t think it was what they were really expecting. It’s a lot more professional than just dads and lads.”

As well as making sure he keeps on top of his school work, Teddy also has to follow a strict training regime to ensure he’s on top form when he takes to the track. His other hobbies, football and skateboarding, help but he also has a series of specific exercises to help him maintain his weight and strength.

“You’ve got to maintain fitness and weight – although it’s quite good to be small!” he explains.

“You’ve got to be strong too, as you have to maintain your hold on the kart – which can reach speeds of up to 85mph. So I do some special exercises which include having a steering wheel with weights attached to it.

“Stamina is important too – the tracks are usually around one-mile, with qualifiers lasting for around twelve laps, building up to around eighteen in the main finals. And as you get older, the races get longer.

“I am racing every weekend; it’s hard – you have to start young; you couldn’t be my age now and try and pick it up and compete with people the same age; you need the experience of coming through the ranks.”

Since starting his karting career Teddy has been on the podium numerous times and has an impressive array of silverware – but none more precious than his British IAME Cadet Karting Championship trophy which bears his name alongside that of his hero.

“Lewis Hamilton’s my F1 idol. As part of my prize for winning cadets last year I got to go to the Auto Sport International Awards and me and my two friends who were winners got to meet Lewis. It was brilliant.

“That’s definitely a highlight, along with a recent weekend, which was the best of my career; it was part of a qualification where you have one start at the front, one in the middle and one at the back; from the front I was 1st, in the middle I started 16th – and won, and from the final race I started last at 32nd on the grid and I won. It was only the second time that feat had been done – and I did it the first time too!”

A season’s racing at Teddy’s level costs in the region of 400,000 euros, which will rise to 750,000 euros and beyond when he is old enough to make the move to Formula Three.

He is currently sponsored by Moore Thompson Accountants, Liquid Colour Designs and Total Kart Shop and has some interest from Italian backers, while his own family has been helping support his endeavours.

“I’ve got some great sponsors, but I still need some more to help get me to races. I’ve gone out to race in Europe as there more classes to compete in there, and it’s great that there’s interest from Italy, but it would be fantastic to get some more English sponsors too.

“I honestly don’t have a back-up career in mind,” he adds smiling, “I don’t really want to think about anything else. I want to be a paid racing driver – and my goal is Formula One.”

Judging from his determination, there’s no doubt Teddy Wilson is a name we’ll be hearing a lot more of in the future.

• To find out more about Teddy’s racing exploits or to contact him visit www.teddywilsonracing.co.uk