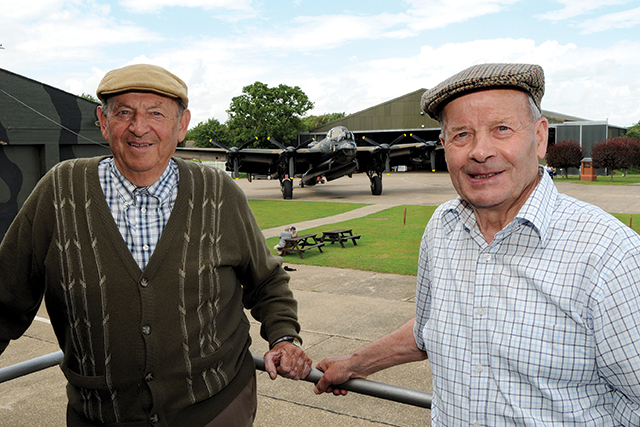 One family’s tribute to Bomber Command

Recreating the sounds and atmosphere of a wartime airfield has been the mission of the Panton family since they opened Lincolnshire Aviation Heritage Centre in 1988. While the sound of the Merlin engines of Lancaster NX611 ‘Just Jane’ are heard on taxy runs made throughout the summer, the longer term aim is to return her to flight.
Andrew Panton is one of the third generation of the Panton family, grandson of Fred Panton, carrying forward the centre as a fitting tribute to the aircrews of Bomber Command and a lively venue for a host of other events. The long-term goal, which was first announced by Fred in 2009, is the gaining of an airworthiness certificate for ‘Just Jane’.

“We have a busy taxy season during the better weather which earns income to fund the restoration,” explained Andrew. “The work really gets underway during the winter which last year saw a paint strip and survey of the whole aircraft. We are estimating that it will take an investment of around £3m to complete the work so we are working to a ten-year timetable. It is our ambition to make sure the world has a third flying Lancaster.”

While last winter saw Just Jane in bare aluminium, later this year visitors on the regular Restoration Tours will be able to follow work on the port tail, fin and rudder. In addition the under carriage will be removed and internal engines taken off.

At present, smaller aircraft such as a Dakota, can fly into and out of East Kirkby using the 4,000ft of part-concrete and part-grass runway. This would not be sufficient for a take off by ‘Just Jane’, but Andrew has permission to use a further 6,000ft of grass runway on neighbouring land.

“An extra boost for the promotion of the centre has come from a trade stand, manned by volunteers from Norfolk and Suffolk, which now tours airshows in the east of England, raising not only awareness but also funds.”

Visitors to East Kirkby will find the airfield recreated to its original design which gives a vivid sense of the atmosphere of a real WW2 base. The collections of hangars, artefacts, vehicles, documents and personal stories leave a powerful impression, helping other families to not only remember their loss but also educate successive generations about the bravery and sacrifice of Bomber Command crews.

A particularly poignant building is the Memorial Chapel where the names of the 848 airmen and ground crew who were lost from RAF East Kirkby are listed. Visitors find time for quiet contemplation in this chapel, away from the bustle of the most popular attractions at the centre such as the Home Front exhibition and of course ‘Just Jane’.

As well as a wide variety of exhibits, there is a welcoming café and shop on site which completes the centre as a self-contained and fascinating day out not just for aviation enthusiasts but the whole family. The excellent facilities also mean many other events are held at East Kirkby which can also be hired for corporate or private functions.

There are many ways in which you can help support the restoration of ‘Just Jane’. By joining The Rivet Club, members can make a monthly or annual donation (from as little as £2 a month) and will receive regular monthly newsletters and weekly restoration reports during the winter. Lincolnshire Aviation Heritage Centre produces many items of merchandise which make excellent gifts for aviation enthusiasts. Details of all the ways you can support the centre can be found on their website: www.lincsaviation.co.uk

LOSS OF A SON AND BROTHER
Lincolnshire Aviation Heritage Centre is a privately owned museum which was set up by brothers Harold and Fred Panton in memory of their elder brother, Christopher Whitton Panton, a Bomber Command airman who was shot down and killed over Nuremburg in November 1944.

Not until the 1970s could their father fully address the family’s loss but a visit to the war grave reignited Fred’s interest in the war. The family farm in east Lincolnshire includes the site of former RAF East Kirkby, from where more than 800 losses were recorded during World War 2. The airfield still had the Control Tower and other wartime buildings. When Fred saw Lancaster NX611 come up for sale, the purchase was made to add to their growing private collection of artefacts. It was not long before it was suggested that their unique site and iconic aircraft should open the doors for the public.