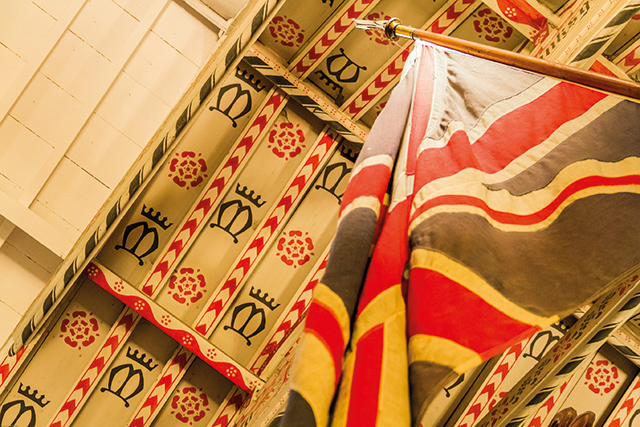 Firmly fixed on Lincolnshire’s tourism calendar for over 20 years, the West Lindsey Churches Festival reaches a major milestone this May with a record 100 churches taking part.
As it’s also 100 years since the end of the First World War and the formation of the RAF, the festival has fully embraced the 100 theme, and asked its churches and chapels to focus on War Art, from long-standing memorial stained glass to poppy sculptures made just for the occasion. And they have more than risen to the challenge. How could they not, in Bomber County?

Festival chair, Paul Howitt-Cowan, sets the scene: “West Lindsey is an area with a rich aviation heritage and a strong association with the RAF. During World War Two there were thirteen airbases in the district, although only one now remains active at Scampton. However, there is plenty of evidence of the RAF’s existence and none more so than in the area’s churches. Our festival offers so many ways to connect with and honour those that served.”

The festival is one of the largest of its type in Europe and regularly attracts around 10,000 visitors to the district. Taking place over two weekends, churches to the East are open Saturday 12th–Sunday 13th May and those to the West are open Saturday 19th–Sunday 20th May. Many churches sit within the Lincolnshire Wolds, making touring between them a chance to enjoy some outstanding landscapes too.

Over 700 people volunteer for the event, sprucing up the churches and making sure visitors spot the little details, like the font with no Christian symbols at Stow Minster. But volunteers have found that knowledge flows two ways, as Paul explains: “We often have visitors give us a new insight into our buildings; most recently we entertained experts from the Lincolnshire Medieval Graffiti Project, who found many examples in our churches to the delight of the volunteers.”

No two church experiences are quite the same. Visitors can arrive to find anything from an exhibition about Katherine Swynford (Kettlethorpe), the wonderfully named Hymns and Pimm’s event (Great Limber) or a rare chance to see Bishop Edward King’s vestments (Grayingham). People can look through the parish records dating back centuries, take a pew and enjoy lunch in a most historic setting, or (thanks to the Lincolnshire Organists’ Association) follow an Organ Trail of fourteen live music recitals spread across the two weekends.

Some churches, however, greet visitors with a hushed silence and discreet guide on hand if needed – look for the churches listed as ‘quiet’.

“We have works of art worthy of the V&A Museum,” explains Paul, “such as Burne-Jones stained glass windows at Morton. We have objects worthy of the British Museum, like the 14th-century brass effigy of a knight in armour at Buslingthorpe. But unlike those big London museums, our national treasures are in their original settings and we offer tea and cake at prices that won’t make you faint! I hope people can join us.”

WAR ART HIGHLIGHTS: 12TH–13TH MAY
Visit Brocklesby in the north east of the district to see several memorials to Lord Worsley, killed in WWI, including his ‘dead man’s penny’ and officer’s sword; or head out to Brookenby for a chance to view the Heroes of the Airfields travelling exhibition. Cabourne has photography of war graves and memorials in France, whilst Caistor St Peter and St Paul will display sculptures made from poppies. The rood screen and loft at Great Limber offers a tribute to the men of WWI and there will be a commemorative war banner to view at Keelby. Nettleton has a War Memorial Bungalow, Rothwell a stained glass window memorialising Private Hubert Storer and Tealby will be showing a commemorative piece of art dedicated to their WWI fallen.

Apley, in the south east of the district, is focusing on the gravestone of Constance Prescott of the Queen Mary’s Army Auxiliary Corps, who died in 1922. Faldingworth commemorates the presence of the Polish Air Force there with their fascinating memorial gates and stained glass. New stained glass at Friesthorpe honours the Beechey Family (who lost five sons in WWI) and at Southrey another new stained glass window honours their WWI dead. Unusually, Wragby church’s memorial is their organ.

Bardney, East Barkwith, Fiskerton and Reepham will also have war exhibitions. Memorials and war graves will also be the focus at Greetwell, Linwood and Legsby.

WAR ART HIGHLIGHTS: 19TH–20TH MAY
Bishop Norton, in the north west of the district, will have war paintings on show, whilst Blyton will have displays on both centenaries, along with their spectacular ceiling flags of the WWI allies. Corringham’s displays include a plaque dedicated to Australian airmen who crashed nearby. Scotter will show a textile triptych made by the village to honour the men who fought in WWI. Willoughton will focus on aviation history, whilst there is a new war memorial at Gainsborough’s St Thomas of Canterbury.

The Heritage Association at Nettleham, in the south west of the district, will be providing war stories, whilst Riseholme will tell the story of the only man born in the village to be killed in WWI. Scampton has many war graves, including those of German soldiers. Welton has standards from the old Scampton RAF base and a stunning memorial stained glass window from 1921 featuring aircraft flying over Lincoln Cathedral along with St Michael the Archangel. The Heroes of the Airfields travelling exhibition will be in Willingham by Stow during the second weekend.

War memorials and graves will also be the focus at Fillingham, Hackthorn, Owmby by Spital and Saxby.