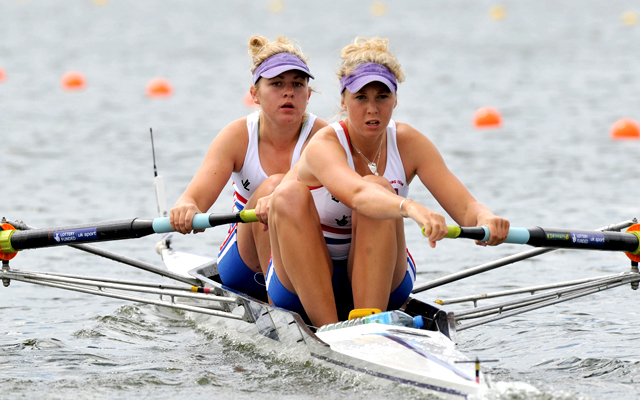 One step at a time to join Olympic Eight

“There’s so much hype at the moment it’s amazing. But I’m just pretending that it’s not happening, because I don’t want to get too excited about it.”
In typically ebullient fashion, Heighington rower Emily Taylor succinctly captures the dilemma faced by every aspiring Olympian. As the countdown to London 2012 continues apace around them, the last thing these subjects of such public scrutiny and expectation need is to get caught up in it all.

“I think if I wasn’t in the team I’d be getting involved with all the hype as well,” said Emily, “but the worst pressure definitely comes from within myself. We had a big team meeting at our recent training camp, talking about the team selection, and I just came out of the meeting thinking that I was going to be sick. It was horrible! I worked myself up into a frenzy, but you try to forget all about it when you’re out on the water.”

Serenity under pressure is vital, even in this most physically demanding of sports, as Taylor prepares to be part of the Women’s Eight team looking to improve upon their fifth-place finish at the 2008 Olympics in Beijing. She was a reserve at the 2011 World Championships, in Slovenia, finished fourth at the subsequent European Championships and is determined to use those disappointments to positive effect in 2012.

“I think all of these negative experiences do help me. I just focus on something that’s really annoyed me and it helps me go faster! I was very disappointed not to make the eight for the senior team. I just missed out by less than a second, but going to the event as a spare was such a good experience for me.

“It was a good year,” said Emily, with justification, after also taking a silver medal in the World Cup series race in Munich. Yet her smile hides the sort of commitment and determination necessary to make the grade in a team which topped the sport’s medal table in Beijing with six.

“You learn so much from just training in a squad which already has so many Olympic medallists. Everyone’s pushing each other on and as a team we’re working really well together. Everyone knows that some people aren’t going to make the final team, but we’re driving each other forward. Obviously there is a lot of pressure but we’re professionals and dealing with it well.”

Taylor feels in good form going into a crucial period when the final squad will be selected, despite an apparent injury problem. “I hurt my back just before Christmas and I wasn’t allowed to race. So I did a lot of work on the bike and cross-trainer, and with the physiotherapist, and I think I’ve come back quite a lot stronger. Now I feel like I’m rowing better than ever.”

Emily’s rowing career started with a chance encounter on a Durham street with a fellow student who happened to be a recruiting officer for the university rowing club. Within two years she had won her first international medal – a bronze as part of the Women’s Four at the Under-23 World Championships – but what potential did she exude to be selected so randomly?

“That I was quite tall and big” she said, only half-joking but perhaps overly modest. “If you’re trying to attract people to the sport from an early age, they always look for the taller and bigger people. I think now I’m probably one of the shorter ones in our group – a lot of the girls are way taller than me.”

At five feet and ten inches, Taylor still cuts an imposing athletic figure and had shown promise as both a swimmer and cross-country runner before settling into a boat. Even with natural physical prowess, though, she must have also had an innate ability in the sport to achieve so much so soon.

“I must have had some sort of natural ‘boat feel’ as well, but I think I just always worked really hard, and that’s how I got results to start with,” said the twenty-four-year-old. “A lot of recruiters say, ‘Oh you’re amazing, you’re going to go to the Olympics’, and people don’t really understand how much hard work it takes to get to this level.

“I think one of the main reasons I achieved so much so quickly was that I always enjoyed it, no matter what, and I was always quite grounded. Even when people said, ‘You’re going to be really good’, I never really believed it. I just kept working harder and harder.”

Merely working hard, however, isn’t enough. Rowing is as much about rest and recuperation, and the mental strain can be as great as the muscular. “Recovery is probably more important than the actual training,” said Emily. “I’ve wiped out a whole season through under-recovery, or over-training, or whatever you want to call it, and it isn’t very nice. It’s just looking after yourself really; you can’t burn the candle at both ends.

“Mentally it is quite tough, especially training with this squad, as it does feel like you’re being watched all of the time. You need to be constantly trying to better yourself but that doesn’t mean going out on the water and absolutely killing yourself. I’ve learnt over the last few years that you can’t do that for three sessions a day, but staying focused and determined is vital.”

Although now based in Berkshire, to take advantage of the superb facilities at the team’s Redgrave-Pinsent Lake training centre, Taylor credits one of our most famous landmarks with a special role in her impending success.

“I absolutely love Lincoln Cathedral. I’m convinced that it’s the most beautiful building in the UK,” she said. “I just love it at night-time as well, when it’s all lit up. One night when I was doing my cross-country training, it was snowing and we were running around the Cathedral and it was like being in a massive snow globe. I just love it, I’ll never forget that night.

“Lincoln Sportsman’s Club (which has made donations towards Emily’s training fund) has helped me quite a lot too. It’s really nice that so many people back at home are so excited about it.”
Young enough to also have 2016 in her sights, she is nonetheless fully focused on London 2012 and the excitement that home glory would bring.

“My ultimate dream is to win a gold medal but I need to make the boat first. That’s going to be quite a challenge. You need lots of short-term goals, because you’ll never achieve anything if you just say, ‘Right, I want to make the Olympic team’. You have to have a process to achieve that.

“I feel like I’m still improving all the time but you should never think that you’ve done enough – there are always improvements to be made. It’s going to be a hard few months, really.”