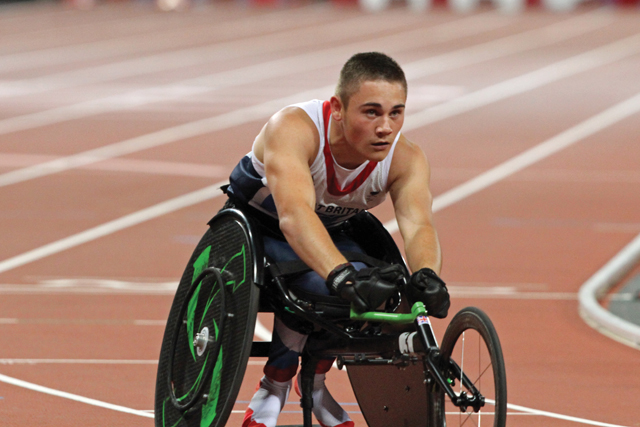 It is nearly 8 o’clock on Tuesday evening, 4th September 2012, and the 80,000 capacity crowd in the Olympic stadium is hushed in anticipation of the sprint that is about to unfold.

Jamie Carter, from Binbrook near Market Rasen, lines up against some of the world’s greatest Paralympic athletes in the men’s T34 200 metres wheelchair race at the London 2012 games. Little do the watching public realise that Jamie is the least experienced of all the athletes on show and despite finishing in eighth place, Jamie had posted a personal best in the event with a time of 30:85 seconds in the qualifying round.

It is a far cry from the early days, when Jamie could never have dreamt that his athletics career would take such a dramatic rise.

At an early age he went along to Stoke Mandeville where, through the WheelPower charity, he was able to try various sports. However, Jamie’s love of athletics really began to take shape whilst he was still at school.

It started when he was invited to an event in Hull in June 2010 where he tried different events including wheelchair basketball, athletics, table tennis and Boccia. Despite being told that he had a talent for all the sports on offer he decided on athletics, especially after a visit to a Paralympics Talent day in Sheffield, in November later that year. Shelley Holroyd from England Athletics allowed Jamie to take home one of the racing chairs from the event. Jamie recalls that this was the first of many borrowed racing chairs in his first year within the sport. It was his first time in a wheelchair specially designed for athletics and he has never looked back since.

From Lincolnshire to London is a meteoric rise and Jamie is quick to acknowledge those who have helped him along the way, particularly his coach, Jenny Archer. It was in a previous role as the fitness guru of the men from Plough Lane that Jenny started to make her name in coaching. The ‘Crazy Gang’, as they were called, were the team of Wimbledon FC, who often strike fear into many opposing sides. Yet it was Jenny who drilled a ruthless streak into them that would see them rub shoulders with football’s elite in the 1980s and early ’90s – not only surviving in the top flight of football, but comfortably maintaining their place at that level for many seasons. However, in recent years, Jenny has turned her attention to coaching a number of Paralympic athletes including the six-time gold medalist, David Weir CBE.

Jamie often goes to the track at Kings Meadow in Surrey and regularly trains with David who, along with Jenny, has helped to improve Jamie’s racing technique. Along with the others, he can often be seen training in Richmond Park and the undulating landscape has given him the extra mental strength when he needs to dig deep in the final stages of a race.

Born with cerebral palsy, Jamie has limited mobility in all four limbs and from an early age he used a wheelchair to help him get around. However, David Weir said: “Jamie is one of the best athletes I have ever seen in his category.” As an elite athlete, Jamie has his current wheelchair supplied by the charity Get Kids Going! His previous one was provided through local fundraising and another charity, Caudwell Children.

It was apparent that, despite his relative inexperience, Jamie had real talent and after just a short time in the sport he went on to break a number of records that he still holds, including the British records for the 200 and 800 metres.

During the 2011 season he set new personal best times for a number of distances, from the 100 to the 800 metres, meaning he finished the year as the top British athlete in his category – in addition, setting ‘A’ standard times for the London 2012 Paralympics Games.

His coach, Jenny said: “Jamie likes to put in the hard work and despite everything that is thrown at him, Jamie just goes ahead and does it.” Since he has worked with her, Jamie has learnt a whole new way of training which has turned him into a potential medal contender for the Rio Paralympics in 2016.

It is a testament to his dedication that, despite living in the country, he is willing to travel ten miles to the nearest gymnasium in Louth and fourteen miles to his local sports centre, the King George stadium at Cleethorpes, where he can train on his own in all weathers.

However, it is the Games in London which have been the highlight of Jamie’s career so far and he says that his dream came true in September 2012 when he was given the chance to represent Great Britain at the Paralympics. He said: “I received the phone call from the head coach to say I had been selected. I told my parents and a few other people but I was not allowed to tell anyone else until the official announcement had been made the following day by Paralympics GB.”

Prior to the start of the event, he went to the training camp in Portugal where he was able to hone his technique alongside many of the world’s top athletes in preparation for the races to come. He feels the additional warm weather training helped him do well during the following few weeks.

The benefits of being a Paralympian were not lost on Jamie. “Arriving back into the country at Gatwick airport, I was taken straight to the Athletes’ Village in a chauffeur driven BMW, ready to compete in the biggest competition of my life to date,” said Jamie.

He watched David Weir win the first of his four gold medals with his coach Jenny in the warm-up area, which is situated alongside the Olympic stadium. As they watched the race together, Jenny pointed out some of the mistakes the other athletes were making, giving Jamie a valuable lesson that he could take into his own races.

When his big moment arrived, in the first of his two events, Jamie treated it like any other race, although David Weir had told him to keep focused but to recognise the crowd when they cheered for him.

Despite finishing in eighth place it was a memorable experience. In the 100 metres race, Jamie was unable to qualify for the final but still feels it was great to be involved.

“It is unbelievable to think that I only started racing less than twenty-one months earlier and yet I’d just taken part in the biggest competition in the world,” he said.

What of Jamie’s hopes for the coming year? “My plans for 2013 are to enter a few more competitions and compete in England and Switzerland whilst hopefully qualifying for the IPC World championships in Lyon, France in July 2013 – with the opportunity once again to represent Great Britain in a major championship,” said Jamie.

If you would like to get in touch with Jamie’s coach, Jenny, email: jenny.highperformance@hotmail.com

If you are interested in wheelchair racing then contact Jane Emmerson at Get Kids Going! at info@getkidsgoing.com Tel: 020 7481 8110
Alternatively, contact www.wheelpower.org.uk if you wish to try out different sports.

Caudwell Children provide equipment, treatment, therapies and family support for disabled children and their families across the UK. www.caudwellchildren.com