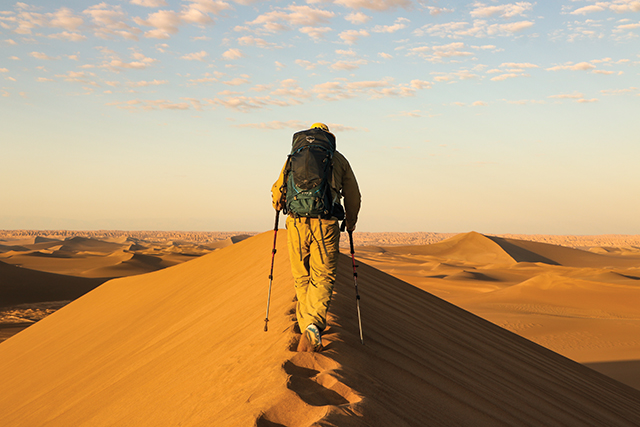 It’s 50 years since man first landed on the moon and Kate Chapman explains how one Lincolnshire explorer was privileged to be among those gathered to celebrate the historic occasion at a special gala in New York alongside some of the crew.

Andrew Pearce is an advocate of making the impossible possible and has an impressive list of achievements to his own name including expeditions to both the Geographic North and South Poles, the first ever winter ascents of the Arctic’s highest mountains in Greenland and planned first attempts on all four volcanoes in the Virunga range in the Democratic Republic of Congo (DRC).

He’s also climbed in the Himalayas and Europe and last year crossed a new route in the Lut Desert, Iran, named by NASA as the Pole of Heat on Earth – the hottest place on earth where ground temperatures have been recorded at a sweltering 70.7 degrees centigrade.

Thanks to his incredible feats, which have helped raise thousands of pounds for charity, Andrew, a Savills Director and Head of Rural Agency for the Northern Region in Lincoln, has been a Fellow of The Royal Geographical Society for the last eleven years.

Last year he was nominated by the British Chapter for membership to the infamous Explorers Club – established in New York in 1904 as a meeting point for scientists and explorers from across the globe – which hosted the gala celebrating the 50th anniversary of Apollo 11’s successful moon landing on 20th July 1969.

“The gala in Times Square really was a once in a lifetime event and a great honour to attend,” said Andrew, on his return from America.

“There were 1,700 people from all over the world there, including several members of the original Apollo 11 mission.

“Hearing their stories and listening to them talk about their experiences up there on the moon was amazing. Even now I can’t comprehend how they even got up there!”

Andrew’s own passion for adventure stems back to his childhood when he enjoyed activities with Cubs and Scouts. As he grew older he sought out more adrenaline-fuelled pastimes, even forging his own mother’s signature so he could complete a parachute jump when he was 15 – instead of waiting another year until he was old enough.

That was followed by a series of marathons before he started looking for even more ambitious challenges.

“Back in 2006 I met some people and we decided to go on a trek to the Geographic North Pole – the most northerly point in the world,” he recalls.

“Once we arrived I remember using my GPS tracker to find the exact spot in the ice sheet, I put in my ski pole and circled round it going through all the lines of longitude.

“It was a great feeling being on top of the world and I thought that was going to be it but then someone suggested we go to the South Pole too – so two years later I found myself on my way there.

“They really are very different; in the north, everything is in flux, the ice is moving. It’s one big ice sheet, splitting and breaking apart and then coming together again, while the ice in the south is 4km thick, it’s a prairie, but it’s so bleak and there are no real features, until you get to the actual 90-degree point, then there are memorials and the American Ice Station, where everyone’s walking around inside in T-shirts!”

Following these expeditions Andrew completed his polar grand slam with treks to South Georgia and Greenland, where he was part of a team making the first winter ascents of the Arctic’s highest mountains.

An attempt on all four volcanoes in the Virunga range in the DRC came next, but due to the rebel groups emanating from the Rwandan War, Andrew’s group only managed to climb the biggest of the four volcanoes, Nyiragongo, as the site of their intended base camp was situated on a transit route being used by the rebels in the area. Instead they trekked through the dense jungle for three days hacking the undergrowth with machetes before climbing up through the Rwenzori mountains where they were rewarded with views over the stunning glaciers.

“After the jungle, and having done the poles, I thought it was time to tackle a desert and the one NASA has dubbed the Pole of Heat seemed a good idea,” says Andrew.

“Nobody had ever crossed it on foot until 2015 and before that you have to go back to Marco Polo and his camel trains in 1271. We took a different route – so we were crossing where it had never been walked on before.

“It’s the most amazing place – it starts with big sand dunes, then a meteorite plain in the middle where it’s just a big hole, then out the other side there are rock formations known as kalutes; ancient sea beds eroded by wind and water which have created giant corridors of sandstone.”

Andrew’s love of adventure has helped raise money for several charities over the years including Macmillan Cancer, Leukaemia Care, Save the Rhino, Lincolnshire Rural Stress Network, Help for Heroes and the Lincolnshire and Nottinghamshire Air Ambulance, of which he has been a trustee for the last twelve years.

His admission to the Explorer’s Club was completed last year. Based in New York it was established in 1904 and celebrates many firsts achieved in the world of exploration, including the first expedition to the Geographic North Pole in 1909 and the Geographic South Pole two years later, the first to summit Mount Everest in 1953, and the first moon landing, as well as many more.

The club holds the greatest number of world firsts and its membership is a Who’s Who in exploration counting Michael Collins, Buzz Aldrin, Sir Edmund Hillary, Roald Amundsen, Wilfred Thesiger, Captain Scott, Shackleton, President Roosevelt and The Duke of Edinburgh among its numbers.

“I love exploring new places and am always looking for a new challenge; it’s all about making the impossible possible, that’s what I tell students when I end my presentations.

“You just have to look at all the different aspects and then work through each one. I suppose it’s a bit like going to the moon in the first place.

“Plus they’re good fun too, a change from the day job and a great way to raise money for charity at the same time.”

And as for Andrew’s next adventure, well he assures me something exciting is in the pipeline but he’s not quite ready to reveal what just yet, so it’s a case of watch this space for now.