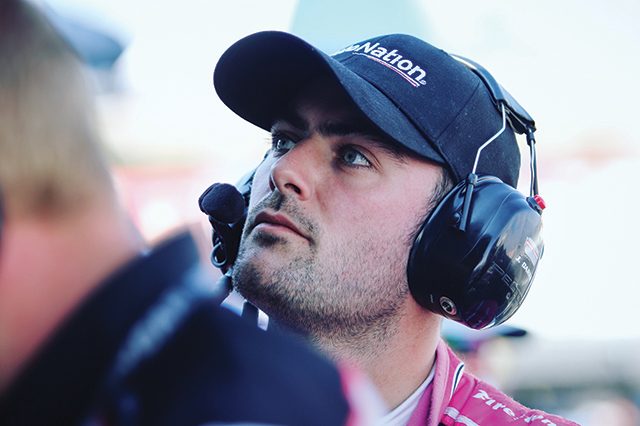 Life in the fast lane is proving successful for Lincolnshire-born race car driver Jack Harvey. He tells Kate Chapman about his move across the pond and competing in the Verizon IndyCar Series.
Jack, who grew up in Bassingham, has an impressive racing CV, having climbed the rungs of European motorsport before heading to America, where he has been competing in the Verizon IndyCar Series.

A rookie to the discipline in 2017, Jack raced in the IndyCar 500, the Grand Prix at Watkins Glen International and the GoPro Grand Prix of Sonoma, at Sonoma Raceway, after signing a multi-year contract with Meyer Shank Racing.

He built on his experience in 2018, competing in six further races, including the 102nd Indianapolis 500, which he came close to winning.

The 25-year-old will compete in at least six races next season and has his sights set on winning the Indy 500 race.

“I absolutely love working with everyone at Meyer Shank Racing and Schmidt Peterson Motorsports. IndyCar is on the up – there is such a great atmosphere around the series with some great teams and drivers and hopefully we can remain part of the series for many years to come,” said Jack.

“Despite only competing in six races [in 2018], there have been a lot of great moments and now my goal is to keep improving in every department.

“There are some elements which I can improve on, and others which the team can and together we will try and find the best solutions and make the necessary changes. We have the potential to be regularly running in the top ten, so that’s one aim we are working on fulfilling next season.”

Jack’s passion for motorsport began when he was a schoolboy and his dad Paul took him to a karting track.

“Motorsport has been in my family for as long as I can remember,” he recalls. “My dad was into karting when he was younger and my uncle is also a motorsports fan and races supercars, so I’ve been around motor racing my entire life.

“As a child I was quite into football, playing for my village team with my school friends. It was my dad who first got me started in karting. He thought it would be something I would enjoy and suggested I have a go.

“What surprises a lot of people is that I didn’t enjoy my first experience – I was still very young and didn’t know anyone at the track and to be honest, I was happier playing football.

“I wasn’t very comfortable the first few times and therefore wasn’t very quick and when you’re young and not immediately very good at something it doesn’t really make it enjoyable.

“However, my dad encouraged me to stick at it and I’m grateful he did as I started to get better at karting, I made a group of friends at the track and really started to enjoy it.

“Bit by bit I began to win races and then championships and I started to believe that this was something that I was good at and could potentially have a career in – and the rest is history!”

Jack entered the world of racing through karting, competing in the WTP ‘O’ Plate karting championship where he was crowned champion in his very first year.

Over the next four years he won eight more karting championships and firmly cemented his position as one of the hottest talents in British racing.

He then graduated to single-seaters and the Formula BMW European series in 2009/10, where he dominated the second season, only missing out on the championship by a handful of points.

Jack’s next move was to the British F3 series, where despite stiff competition he took the title in 2012. The following year he stepped up to GP3 – one of the feeder series for Formula 1 – where he raced on European F1 circuits. Wins at Monza and Silverstone saw him finish the season as the top rookie driver in fifth place.

His journey to IndyCar began in 2014 when he moved to America and began competing in Indy Lights, where he finished second in his first two seasons.

In 2017 he made his IndyCar debut, which included the opportunity for him to fulfil a lifelong ambition of competing in the iconic Indy 500 – although he was forced to retire early. In the same event in 2018 Jack was up to third place in the closing laps thanks to strong pace and excellent team strategy. However, a late caution period wasn’t long enough for him to conserve tyres and fuel and he had to make a final pit stop on lap 197 of the 200-lap race.

“Competing at this level is what I’ve worked towards since I was 9 years old – I absolutely love IndyCar racing,” added Jack.

“It can be incredibly frustrating when you catch a yellow wrong, but it creates opportunities that could go either way, and that’s what makes it so exciting.

“I went three-wide for the win – I’ve always said if I was in that situation I’d go for it, so I wanted to make sure those weren’t just words. Granted we didn’t get the result we wanted in the end, but we showed everyone what we are prepared to put on the line for a big event.

“I like the fact that you can never predict who will win, or honestly even how the top ten will pan out!”

The Verizon IndyCar Series features a combination of superspeedways, short ovals, road courses and temporary street circuits, and offers its international line-up of drivers the most diverse challenges in motorsports.

“I hope that my decision to race in America has been received well, I have absolutely loved my time here so far,” Jack said.

“I miss Lincoln and being at home a huge amount and I try and get back as much as I can.

“Hopefully everyone back home can see that my move to the States has gone well and that I’m aiming to bring a little bit of Lincoln pride to the other side of the pond.

“Hopefully as the IndyCar series continues, the interest will just keep on growing – and then it’s down to me and the team to the get the results that will make everyone proud of this Lincolnshire lad!”

To keep up to date on Jack’s progress and news visit www.jackharvey.com