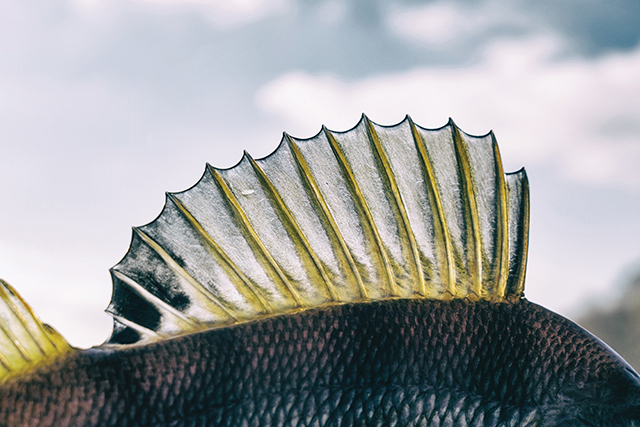 Strongly connected with my earliest angling experiences, perch is the first fish I ever caught – and is probably the first fish for most of today’s anglers too. By Barry Grantham.

Whenever see a perch today I always remember that day fishing alongside my father, a cane in my hand. To this was tied a length of line with a float and baited hook. The float bobbed, then disappeared and I felt a tug on the end of the line. I lifted out an olive green fish with stripes and silver belly. I think of that large spiked fin on its back that inflicted a bloody wound on the palm of my hand.

The perch (Perca fluviatilis) is found all over the British Isles but is very rare in north Scotland. It spawns in April or May, the female laying her spawn in strips up to two inches long, on weed or sunken tree branches.

Unlike other species of fish in the British Isles the perch can survive in a body of water that contains no other fish. The very young perch feed on plankton, then the older fish feed on the plankton-eating young.

This explains the populations of stunted perch in some of our lakes and landlocked waters. If a crop of perch survives a season in great abundance it can go on for up to 15 years or so, dominating each year.

This is the reason why, if you find a shoal of perch, most are of the same size and weight.

The largest perch caught in England, and the British rod caught record, is 6lb 3oz. There are actually two fish of this weight that share the record, both caught in the same year. One fish was caught by a Neil Stephen from Stream Valley Lakes in East Sussex, the other by Ken Brown from Wilstone Fishery, Tring, Hertfordshire.

One day in 1958, on one of the delphs that come from the River Witham, I caught two monster perch.

The record at the time for this fish was 4lb 2oz 8dr, caught by G Butler from the Hobhole Drain, Lincolnshire. My two fish weighed 3lb and 4lb 8oz. They were weighed on a spring balance and returned to the water. I had three eyewitnesses to the catch – did I catch a record fish? I will never know. In 1962 a perch of 4lb 12oz was caught in Oulton Broad, Suffolk – this held the record for a further 22 years. Larger specimens came along leading up to the present record.

Perch like to live in the proximity of underwater ridges, sudden changes in depth of water, bridges, sunken branches, steel cladded bank sides, boat moorings and locks. There are many ways to fish for perch. You can suspend a bait just off the bottom with a float. For bait, I prefer the lobworm or a red worm, the type that are found in good compost piles. I have a farmer friend who lets me dig about in his manure stack and a plentiful supply are soon found. Another method that is becoming popular today is drop shotting. This is a good method for anglers who want to cover as much water as they can. Basically a weight is attached to the end of the line and the bait or lure is attached up the line. It is cast out and the weight lies at the bottom of the water. Movement of the rod tip causes the bait or lure to move and entice the perch to feed. This is a good method to fish in weedy water or near snags.

Lure fishing for perch is very popular. Here in Lincolnshire you will see anglers on most days casting small lures for this predator species. Personally I prefer to use good old traditional lures like the Mepps or small Rapala lures. One of the best lure anglers I have come across is Lincoln angler Sanjay Smith. He has a tally of large perch that is unmatched. When I look on social media each day to see what has been reported on local Lincolnshire waters, there he is with another specimen perch to his credit.

Another method is to fly fish. You do not need any special tackle. A tip to middle action rod of 9ft in length taking a 5 or 6 weight line. Again, one of the deadliest flies to use is a traditional one: the Peter Ross.

Another is the Polystickle, although any attractor type flies with a bit of flash will work well. It is advisable when using flies to use a fine wire trace; a pike could take your fly and that will most likely end in a break off and the pike swimming away with a hook in its mouth.

I do offer guided days fly fishing for perch with all tackle supplied, so if you want to try out this exciting method, what could be better than on a nice day to be wandering along the banks of a lake or river casting into likely places, in the hope of that monster perch.

The coarse fishing season on our rivers has now ended. In my next article for Lincolnshire Life, I will be writing about fishing for early season trout on a small stillwater in the Lincolnshire Wolds.