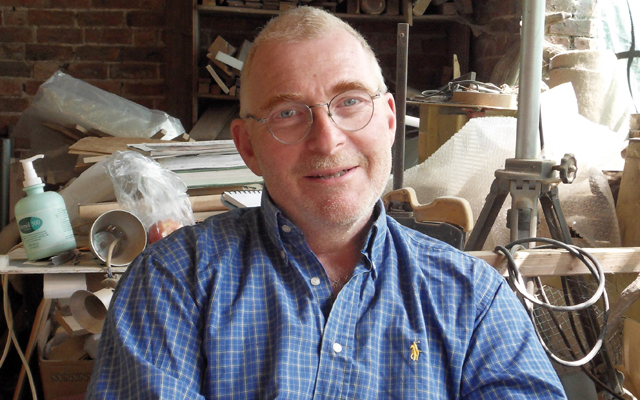 Mike Webster meets up with Peter Tree at his workshop near Rauceby, Sleaford.
Immediately after Peter greeted me, he took me through to the assembly area – or perhaps I should say one of several assembly areas. I was at once aware of a working emporium which positively exuded intense industry, and to a very complex level. It boasted an incredible array of tools, patterns, templates and machinery the like of which takes some seeing to believe. There were literally hundreds of tools and Peter told me that he once had the notion of counting them all. I asked him what the figure was and he explained that he never did find the answer because he was continually adding new tools, both purchased and homemade to the collection as fresh works and pieces evolved.

As he settled down to tell me all about his lifetime’s work Peter emphasised how much he enjoyed making the things he loved so much. His output is prodigious and with an ever-growing order book, he jokingly informed me that he could use several more hours in the day if that was at all possible. For all his overburdened workload, coupled with the pressure to produce within a particular timeframe, I couldn’t get over what a peaceful, placid and absolutely stress-free character Peter conveyed. Peaceful and placid certainly, but ‘laid back’ most definitely not, for Peter is not just a chair maker but a manufacturer of many other bespoke items of fine furniture too including dressers, tables, sets of tables and chairs and anything else that he is commissioned to make. He is frequently asked to create something ‘special’ for a particular occasion or a new piece to blend in with other already existing items of furniture.

Peter was born and raised in Boston and I wondered whether or not his early formative years were shaped by any other member of his family in the woodworking trades. Apparently not, although he recalled how as a young boy he took great interest in the cockle fishing and other boats being repaired in the town. His father had some involvement in this work and this, together with a fascination with his father’s toolkit and its usage, left an indelible mark on Peter’s memory. Wood as a medium held held an allure for the rest of his life. This fact was to be substantially heightened after he joined the choir of St Botolph’s Church at the ‘Stump’. He had a distinct twinkle in his eye as he recounted to me his memories of taking more interest in the carvings of the choir stalls than of the other church matters at hand. The mythological beasts, heraldic symbols and other depicted scenes on the misericords were to stay with him for a lifetime.

Upon leaving school, he first took up a position in the agricultural world and shortly after he moved into civil construction work. His educational background in woodwork and metalwork were, however, destined to steer him into a career which accentuated his love of wood. His father’s collection of tools never failed to impress and he gained much knowledge and expertise in the use of them. It wasn’t long before he launched out himself and purchased a lathe and started wood turning. His initial foray was into the manufacture of boxes and bowls but it wasn’t long before he had ventured into other household items such as rolling pins, mug trees and other saleable pieces for which he found a ready market at Alford craft market.

Peter enjoyed a good challenge from his earliest attempts and it was inevitable that he would move on to making much more complicated pieces. He had developed a big interest in furniture, and with chairs in particular. It was a natural ‘follow on’ that he started to manufacture chairs and with this came his early business enterprise and self-sufficiency. It could be said that the rest is history – but not quite. Peter was never one to create an idea and just stick with that one idea alone. He has continually exploited his ideas and thoughts through the creation of these most beautiful works of art in wood. There is no limit, it would seem, to the outpouring of ideas that this creative genius can produce.

I was always under the impression that a Windsor chair was, well, just a Windsor chair. How wrong I have been all these years. It was only after meeting Peter that I now realise how many different Windsor chair designs there really are. He explained to me how these many designs differ so widely even within the same county – the Grantham Windsor chair being just one classic example. Different areas have different patterns and he can tell where a chair was made and originally came from.

The diversity of Windsor chairs is enormous and throughout history they have incorporated many changes and decoration. From the original plain but elegant simple design of spindles and high back (side chair or carver), the choice can entail many variations. Some chairs have a ‘back splat’ in place of some of the spindles and invariably these are designed quite decoratively. In many shapes and sizes they can be Fiddle, Bulls Eye, Christmas Tree or Wheelback, for example. There are some that replicate historical styles such as Georgian or time-honoured motifs such as the Fleur-de-Lys. One very interesting variation of the Windsor is the design with a ‘Crinoline Stretcher’ incorporating a special shape to the leg bracing pieces (called stretchers), to cater for nineteenth century ladies’ petticoats. Peter’s Windsor chairs are all hand carved designs being the latest development in back splat tradition, highly collectable and unique to this furniture making craftsman. Occasionally one of his customers will get a ‘one-off’ – a product which will never be repeated. These customers are surely the lucky ones!

Peter’s hand carved back splat designs are as exclusive as they are unique. With magnificent attention to detail, they are a ‘must-have’ for many. They are available in sets which display many different themes.

A great supporter of English flora and fauna, Peter has assembled carved collections of the most beautiful leaves and fruits, insects, birds and wildlife, not to mention countless monograms and heraldic crests which can all be specially commissioned.

The choice of wood is most important and Peter only uses the best quality English hardwoods from a range including ash, cherry, oak and yew. Two of the most prized timbers for furniture making are yew and cherry but both these species are becoming increasingly rare. Ash is perhaps the mainstay of traditional furniture making. Strong and flexible, it does the job well and gives a cream or tan colour with straight grain. Oak is the great traditional timber for furniture making. With lovely grains it can be stained light or dark with good results.

Due to the tree size, cherry is becoming rarer but when used it presents a lovely sandy to pink hue which polishes to a very elegant finish. The very best in chair making however is achieved through the use of yew with its fine working qualities. A silky smooth finish and wonderful visual effects of a golden orange to brown are attained and when streaked with darker veins and knots this makes for the ultimate chair.

Peter’s choices of wood for carvings are made mainly from the ‘fruitwoods’ which present a finer grain in order to preserve finer detail. Apple, cherry, pear, holly and hawthorn all work well for that final impact, smooth texture and colouring. There have been occasions when he has been able to use ancient bog oak and bog yew timbers for special creations such as these darker bog woods inserted into back splats as panels in conjunction with other woods. These particular bog timbers originate from the Bronze Age and can be 3,500 years old dating from the time when the Fenland was covered in forest. Whilst they are usually quite sound, unfortunately only a small amount of the timber can be used.

Carefully hand-crafted from the finest materials, Peter’s chairs are perfection in design elegance, structural content and comfort for the user. This is the result of over twenty-five years’ experience and a very extensive and accumulated knowledge of English timbers and furniture making techniques. He is without doubt one of the country’s leading chair makers. He has contributed to TV and the media as well as fulfilling the role of Guest Lecturer at Lincoln University. It comes as no surprise that he is on the Register of the Worshipful Company of Turners of London as well as being the Chairman of the City and Guilds Committee that established the qualification standards for the wood crafts industry sector.

He told me how his work had led him to make lots of long-lasting friends and his involvement in many shows and trade fairs around the country made him proud to be an ambassador for his home county that he adores so much. He has a genuine desire to keep the tradition of fine craftsmanship going not only in Lincolnshire but throughout the country. A lovely thought he keeps in mind concerns the young people starting out in life and how he sees himself as a ‘keeper of skills’ devoted to passing these on to them along with the advice that is so important.

I asked him about any plans he had for the future and he quietly assured me that he just wished to continue making the beautiful things that he loves so much. Time, he told me is of no consequence whatsoever when involved with his work. He will certainly continue to experiment with different pieces and woods and keep the results in his sketchbook. I enjoyed my meeting with Peter immensely and I really did learn a lot about wood and furniture. He is an incredible fount of knowledge on timbers and furniture making generally. He welcomes enquiries from anyone on the subject and he has a very informative website at www.petertreechairs.co.uk