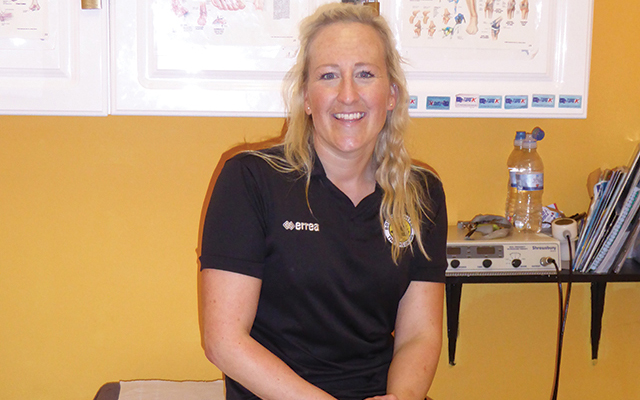 Lincolnshire Life meets Katie Cooper, the sports therapist keeping the players of Boston United fighting fit for each game.
Excitement grew as the players could be seen waiting to run out onto their home ground for their first game of the season.You could feel the anticipation and expectation of the team as they made their way onto the pitch, to the rapturous welcome of the crowd. This first appearance is always an exhilarating moment, regardless of league position or previous performances. The emergence of the players always creates emotion and pride. But this was the first time I had noticed another person running out from the tunnel following the team – the same team colours and sporting kit but with a slightly ‘gentler’ persona.

With great interest I watched this person place a bag beside the bench and proceed to walk the sideline, talking to the management, the subs and the players, getting them to stretch, to warm up, to twist and turn, with sprays and supports in hand before realising: this was their physio and this was a female!

She seemed to have their complete attention and the players did as she said – good for her! During the ninety-minute game she came onto the pitch to assist any injured player, helping some to the sidelines when treatment was needed but also administering sprays and giving advice when required on pitch. She genuinely listened to the players and attended to whichever part of their body they had a problem with! I was intrigued and impressed by a woman who could hold a position like this in such a male dominated world and I wanted to find out more.

On making enquiries at Boston United, I found out that their physio was Katie Cooper and that we actually attended the same local gym. On my next trip to the gym, I realised that Katie was also the main trainer and instructor there – in fact I had to wait for her to finish what looked like a painful and to me completely impossible training circuit class before I could ask her for an interview. She kindly said yes (not even out of breath) and we set up a time to meet at Boston United’s ground.

It was great to see the ‘other side’ of the stadium, meeting Katie at the entrance to the changing rooms which, I think luckily for me, had recently been cleared and cleaned! It was the end of the season so I was able to look behind the scenes to see where the football team was run from. Taking me down a long, narrow corridor, we proceeded to her physio clinic room – a compact but obviously very productive place. The walls were adorned with diagrams of muscles and ligaments, the inside workings of feet and legs and advice and instructions of the workings of what appeared to be the entire human body – pretty impressive, I thought. Obviously to Katie this was her ‘office’, her working station and the place where she treated and advised. Sitting on her streamline, sturdy bed/bench she told me about how she came to be sports therapist for Boston United.

Born and bred in Boston, thirty-year-old Katie had always been fanatical about sport. She played any sort of sport as much and as often as she could and at school was always the one late for afternoon registration because of involvement in some sort of sport during her lunch hour. Her love of sport continued past her school days at Boston High School and into her early twenties. She had originally wanted to be a vet and with this in mind her A Level choices included Chemistry and Biology. However, after a while Katie realised this was not the route she wanted to take and so decided to swap her chemistry for sport and her aims and ambitions changed overnight – she started a new degree in Sports Therapy. This was not a medical or clinical based degree like physiotherapy but it was indeed similar and based on sporting injury background, treatment and rehabilitation. She studied at university in Huddersfield and came out with an honours degree in Sports Therapy.

During her time in Huddersfield she worked with the Huddersfield Giants rugby club – a great experience and one that helped shape her further career. I asked Katie how this compared to her current role at Boston United?

“The Giants were just that – giants,” she said. “By today’s standards their BMIs would have made them all clinically obese but they were all pure, solid muscle.”

Katie told me the injuries sustained in rugby are far more trauma based than footballing injuries, with high impact collisions and full weight clashes. She said the sight of blood on a rugby shirt is apparently very acceptable and almost expected, whereas in football a player would be taken off the pitch for treatment.

“There were many differences with the Giants,” Katie continued. “If a rugby player is injured, they are treated on the pitch and you have to stay on the pitch with the game continuing around you whilst you attend to them – watching out for the other players and the ball as well as actually treating the player!”

Rugby players are of course usually bigger and more solid than football players, with an almost impenetrable muscle mass. Katie told me a story about when she was massaging one player with all the strength she could muster, putting all her weight behind her treatment only for the player to turn around and say, ‘You can go deeper if you want to love!’ – as if her extreme effort had not even touched! Perhaps it was then she decided to move on.

Back in her home town of Boston she started working at Boston United, where the then club physio Lee Taylor took her under his wing. She said it was hard work and she did come up against a few old school attitudes towards her working in the football world but her experience in Huddersfield and her own independence and determination gave her the tools and attitude she needed to look beyond that.

For various reasons, Boston United were not able to keep her full-time on a permanent basis, so it was at this point Katie branched out into other fields of fitness. She started working in local gyms, running classes and advising people in fitness, lifestyle, diet etc – all the elements of healthy living. Her own fitness regime enabled her to offer advice in many areas and also demonstrate the enormous benefits of exercise and the right mindset. Running her own classes in Pilates, Zumba, Aerobics, Spin and Kettlecise, Katie encourages people to look after their bodies, to make the most of the facilities available but also to do the right amount and correct impact exercise for each individual – almost on a personal basis. The fact she is from the local area also helps to create and maintain good relationships with class members, although she is happy to welcome people from everywhere!

However, her love of her role at Boston United never waned and she kept in contact with the club. Eventually they were able to offer her the physio job again and she returned to Boston United where she now combines her work for the club along with her own private physio clinic and all the classes she runs as well – a busy lady!

Katie attends all games both home and away for Boston United but also offers treatment and advice for any type of sporting injury. Her clinic room is well equipped and her knowledge is vast. I have been told by other local footballers who have visited Katie for treatment that if you are looking to have your sporting injury sorted out in an effective and efficient way: Katie’s clinic is the place to go!

If you would like to talk to Katie about any injury problems or her current classes and timetables she can be contacted on: 07763769530 or katiejayne85@hotmail.com