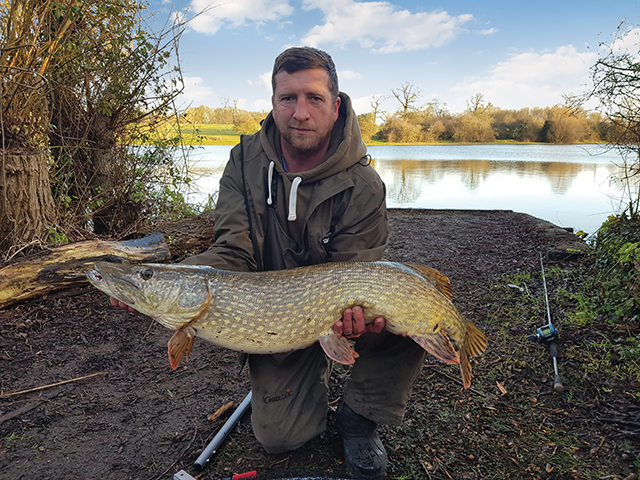 Until not so long ago, the pike was hated by some anglers – others feared it. It became the centre of controversies: if caught, should it be killed or returned alive? Should we stock pike in our fisheries or remove them?

A lot of the argument against the pike comes from anglers who love to go along to a lake or river and fish for pure pleasure, catching small silver fish like roach. Suddenly, when landing one of these fish, there is a sudden pull on the end of the line and a pike is hooked. At other times the sitting angler sees his keep net, which holds a quantity of fish, being tugged and pulled from something subsurface – yes, a pike, lunging away at the submerged net trying to get an easy meal. The angler lifts his net and finds the pike has ripped a hole in the mesh and the fish have escaped, or sometimes the net is lifted clear and attached to the teeth of the feeding pike.

Why do some anglers fear pike? It is all in the angler’s mind, often thought of as a ruthless killer lying in wait for some unsuspecting fish to swim past then be grabbed by all those terrifying teeth. And there is the stare of its eyes on the top of its head. Some inexperienced anglers who accidently catch a pike are literally terrified and will cut their line rather than have to handle the fish.

A pike will only kill and eat other fish to sustain its own body. I have watched pike on many occasions, I have seen them lying still in lakes and rivers with dozens of fish swimming around them with the pike completely ignoring the fish. It only eats when hungry.

There are other myths that make the pike into a terrifying monster. There have been reports in the press of large pike taking a freshly hatched duckling off the surface of the water as the brood swims behind the mother. I have only seen this happen twice, once in a lake and once on the River Witham. There have been tales of pike attacking dogs as they swim, and cattle and horses as they drink from the water. All these stories make the pike seem like a treacherous, vicious killer. This is not so.

The freshwater pike, Esox lucius, can grow to large weights. The UK record for a pike caught on rod and line is 46lb 13oz and was caught in Llandegfedd reservoir, South Wales. There have been larger pike in the UK: one weighing 53lb 2oz was found dead at a lake in Yorkshire. It is thought the fish died from spawning stress. When spawning the pike moves into shallow water, becomes focused on spawning and gets stressed. And so it fails to move back into deeper water and the result can be fatal.

My own experience with a monster pike was back in 1968. I was fishing one of the Delphs that comes off the River Witham. I was fishing a sprat purchased from the fishmongers, suspended with a float just off the bottom. I hooked a small pike that was around 3lb in weight and as I was about to net the fish I noticed a gash near its tail fin. This made me delay putting the landing net under the fish. Suddenly a large pike grabbed the smaller fish in its jaws, turned and shot out to the middle of the Delph, at the same time opening the bail arm on my fishing reel so line could be freely taken.

The fish stopped. I closed the bail arm and struck. The fish was on. It came in slowly with just short sideways movements. As it came into view, I saw that it was huge, with the small pike in its jaws. The monster turned away, hitting my line with its tail, and released the now dead small pike. I was shaking. Since then I have seen many large pike that have been caught up to 31lb – I believe this fish was at least 40lb. A real monster.

A pike cannot be mistaken in its identity. It has a long torpedo shaped body with its fins primarily rear positioned. This gives the fish fast acceleration when lying in wait for food. It has a large, bony flattened head. Its long wide jaws have an arsenal of teeth, rows of backward slanting razor sharp teeth in its upper jaw and larger needle-like teeth in its lower jaw. Once its prey is in these jaws there is little chance of escaping.

Pike mainly hunt by sight. They tend to lie camouflaged in weed beds, their body colour blending with the underwater background, before darting out and seizing their food.

The pike moves to shallow water to spawn. This usually begins in March and can last until May. The female can lay as many as 500,000 eggs.

There are many ways to catch pike: spinning, or with a plug or lure, or even fly fishing; for the larger pike, use a dead bait cast out and laid on the bottom or suspended from a float. The best dead baits are sea fish obtained from a fishmonger or tackle shop that sells pre-packed baits for predator fishing: herring, sprat, smolt and lamprey.

Proper tackle must be used when pike fishing. You can go on the internet and find useful information on tackle and fishing for pike. Here in Lincolnshire we are blessed with many waters that contain large pike.

On Lincoln and District Angling Association’s waters certain rules have been brought in and strictly enforced. These rules are to safeguard the wellbeing of the pike. Mainly you must have a large landing net; if triangular, it must have arms of 36in, if round or oval the net must be large enough to accommodate a large pike. A large unhooking mat is required to lay the fish on when landed, in order to avoid any damage to the fish.

Also needed: large 12in forceps for hook removal; a long wire-cutting tool; minimum 20lb trace wire; treble hooks, size 2 to 10 only; minimum 15lb nylon line or 30lb braid. Your rods, if using two, should be kept no more than 3 metres apart and must be attended at all times. These rules are to protect the fish.

As a water bailiff with Lincoln and District Angling, I have come across several anglers fishing with unsuitable tackle and no landing net or unhooking equipment. They are told what tackle they should have and promptly told to stop fishing.

So what could be better on a crisp, frosty winter’s day than going to a lake or river in search of that Lincolnshire monster, the pike.