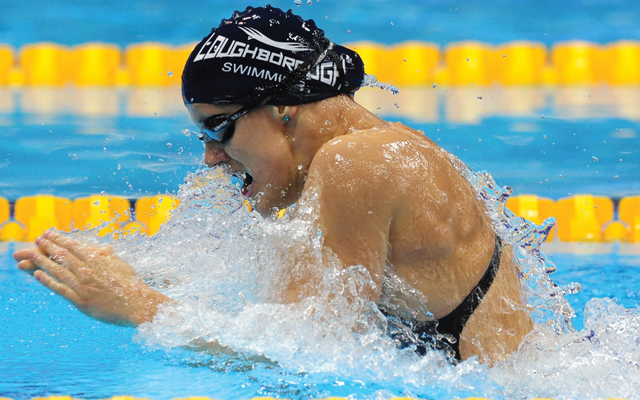 Planning to retire on a medal high

Few twenty-five-year-olds are blessed with the sort of drive and clarity of vision to have even identified their lifetime’s ambition at such a tender age. Fewer still are able to contemplate retirement, satisfied with the achievements of a stellar, decade-long career.
Yet what may turn out to be the final months of Kate Haywood’s career are continuing very much on track as she looks to bow out, in this Jubilee year, with ‘God Save The Queen’ ringing in her ears.

“I just wanted to get into the team and I’ve done that. I’m really pleased with the time as well,” was the succinct assessment of her performance in the London Aquatic Centre which secured her place in the Team GB swimming squad. The British 100-metre breaststroke record holder won the Olympic trial in just over one minute and eight seconds, and now has the perfect chance to go out on a high.

“Yes, I think so. At the moment I’m saying that this is going to be my last year,” she said, when asked about her plans for retirement. “I’m ready to do other things, and you can’t get much better than finishing on a home Olympics.
“Or I might finish this year and think, ‘Oh no, I need to carry on!’ But we’ll just wait and see. At the moment I’m thinking no.”

Even though barely into her mid-twenties – an age which still marks her out as young, even in the ultimate young person’s domain of international sport – Haywood is actually something of a veteran, having announced herself at the 2002 Commonwealth Games in Manchester.
“I had my first international medal at fifteen, and had done all the junior stuff before that, as well as winning the BBC Young Sports Personality of the Year Award in 2003, so I have been doing this a long time,” she said. “You can only go for so long and there are other things that I want to do with my life. I don’t want to be one of these swimmers that carry on until their forties.”

One thing it hasn’t been, though, is easy. Eighteen months ago, Haywood relocated to Melbourne to take advantage of better training facilities and to maximise her chances of success at London 2012; a decision which saw her automatically forfeit her Team GB Lottery funding, as athletes must be based in the UK to qualify.

“It was a massive decision to leave everything but I needed to do it, because I was unhappy and things weren’t going well,” she admitted. “I needed to change and I’m enjoying swimming more than ever this year. I love it out here. I’m very lucky that my boyfriend has a full-time job, he pays for everything, and I wouldn’t have been able to do it without him.

“Athletes should be allowed the choice,” said the Grimsby born former Lincoln Vulcans member. “For me, there wasn’t a breaststroke coach in the UK for me to go to, so I came to a coach (Rohan Taylor) who coaches two of the best breaststroke swimmers in the world, because I thought that would be best for me. You’ve just got to do what’s best for you at the end of the day, and for me that was moving here.

“I wish Great Britain would support that, and it would have made life a lot easier for me if they had, but I just wanted to be able to swim at the Olympics this year, and if it meant losing all that then I was happy to do that. Hopefully I can swim well this year and I’ll be able to throw it back in their faces!”

Haywood continues to improve, and is already seeing the benefits of her work with Taylor, who coached Australian Liesl Jones to Olympic gold in 2008. “Rohan has changed a few things with the way I’m swimming, tweaked my breaststroke around a little bit, and these last few months it’s really started to come together,” she said, discussing their work on Kate’s arm-pull and breathing, which can streamline her path through the water. “It lessens resistance and makes you swim a lot faster.”

After winning three medals at the 2010 Commonwealth Games, despite returning from a hip operation just months before the competition, Haywood is now better placed than ever to realise her ultimate aim.

“An Olympic medal – that’s what I’ve got left to achieve!” she said bullishly, before becoming more phlegmatic. “If I didn’t get an Olympic medal I’d still be happy being able to say that I’ve been to two Olympic Games. I won’t be disappointed – there’s not many people can say they have competed for Great Britain in an Olympic Games. I’ll still be proud of what I’ve achieved.”

With much to choose from – five medals and being the youngest swimmer to represent England at the Commonwealth Games, and twice becoming a European Champion – selecting her greatest moment proves suitably troublesome.

“This is always a really difficult one!” she laughed. “I absolutely loved winning the BBC Young Sports Personality of the Year Award. To win a prize like that was just amazing, and my mum and dad still say it was the best night of their lives, because they got to meet all these famous sports people that they loved.

“And I’ll always remember winning my first Commonwealth medal in Manchester when I was fifteen, qualifying for Beijing in 2008, winning the trials in Sheffield and getting my name in the team – that was an amazing feeling.
“Some things haven’t been great, like my hip injury, but they’ve made me a stronger person and a better swimmer for it.”

Whether her impending retirement is premature or not, moving to Australia hasn’t just improved her swimming, it has broadened Haywood’s horizons for a post-aquatic world. And she at least knows where her future doesn’t lie.

“I don’t want to coach. I’m quite interested in getting into events. I watched the Australian Open here in January, and am thinking of trying to get involved with that next year. I’d like to go into organising sporting events, corporate events. That’s the way I’m hoping to head.”
If winning a Commonwealth Games medal while still studying for her GCSEs is any indication, Kate Haywood will achieve exactly what she sets out to. That, though, is for a future where the thrill of a home Olympics will be but a memory.

“It will be exciting to see the hype,” she said. “I’m not the sort of person that sees that as something to be scared of. Even seeing the occasional TV advert in Melbourne gives me goosepimples.”

Olympic success, of course, is all about shutting out distractions like a capacity London crowd, and ensuring that four years of hard work produces the right performance on exactly the right day.

“As athletes we have to focus on what we’ve got to do,” she said. “I’ve done all the work I can, so I think a lot of it is in your mind. I’m not going to say I’m going to come back with a medal, because you just don’t know what’s going to happen, but I’m going to go there, enjoy it, and swim the best that I can possibly swim.

“I know that it’s my last year so I’m going to go out and give it all I have, and believe that I can do it.”