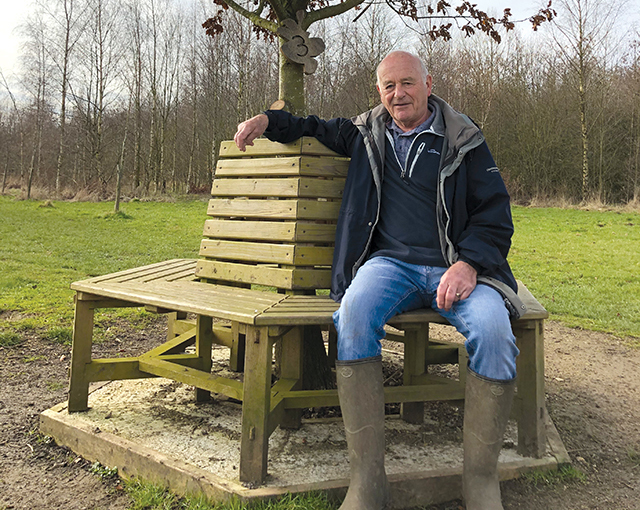 My guide was Rod Newborough, one of the charity’s trustees, who after a career of more than 40 years with the Forestry Commission decided to also volunteer a good deal of his retirement time helping to create these native woodlands close to his home in Scothern.

We met at the nature reserve car park at the end of Ashing Lane and although Rod had pre-warned me that the ground would be very wet, a week had passed since we had spoken and several areas which had been under water had now drained and were comparatively dry. We joined other walkers who were enjoying the bright but chilly spring weather. The reason for my approach to the Trust was to try to find a woodland orientated project which Lincolnshire Life could support as part of our 60th Anniversary celebrations this year.

Walking along with someone who knows every corner of the reserve – in fact, probably every tree which has been planted – gave me insights well beyond admiring the scale and variety of features which have been included.

We entered the reserve through the Threshold Gateway, a timber archway which was designed by local school children to echo aspects of the architecture of Lincoln Cathedral. There is bench seating inside and information boards which give a timeline of the creation of the reserve. Ashing Farm has been owned by the Pickering family since the 1930s when their 50 acres included the land where Pickerings Meadow is today. This land is heavy clay where several areas seasonally flood and was gifted to the Lincolnshire Wildlife Trust (LWT) by Elsie Pickering in 1984.

LWT began tree planning on land adjoining the meadow in 1991 to create Watts Wood, which was also gifted to the Trust in 2005 by Sylvia Watts. Nettleham Woodland Trust was formed in 2006 as a community group dedicated to the development and management of woodland around Nettleham, with a 125-year management lease from LWT being granted on the Ashing Lane reserve in 2010.

A straight pathway leads from the gateway towards the The Monks Oak which was planted in memory of the local farming family who donated the land for this area of the reserve. More than 30,000 native trees and shrubs were planted by local volunteers between 2009 and 2012. Notably there are ash, oak, birch, small-leaved lime and alder. Smaller trees include field maple, wild cherry, crab apple and hazel. The Lincolnshire Co-operative Wood features many species of willow which can tolerate the wet habitat.

While tree planting has been very successful, nature still dictates some of the success or failure, with a large grey squirrel population causing major damage to the tops of some trees. Rod explained that they gnaw bark around the top of the oak’s trunk which dies back and then is toppled in strong winds. Rod pointed to several examples as we entered Watts Wood via Sylvia’s Gate, named in memory of woodland volunteer Sylvia Wood. On the other hand birches and willows have self-planted in the woods and are thriving. Last year there was a beautiful show of Southern Marsh-orchids which have naturalised themselves on the reserve.

I was already getting a feel for the very close community links which are celebrated throughout the reserve, with people and organisations. Cathedral Copse was planted in 2017 to commemorate the 800th anniversary year of The Charter of the Forest, while the stone Book of Oaks monument marks those who pledged gifts of woodland oak timber for the restoration of the Cathedral roof. It is hoped that the 100 oaks which were planted in the area by the Nettleham Woodland Trust will one day be used in restoration work on the Cathedral. That will not be in Rod’s, mine or even our grandchildren’s time but they are monuments planted for future generations and centuries of Lincoln Cathedral.

The Beatles Pond is so named because a volunteer sold her treasured autographs of the Fab Four to fund the excavators to dig out what is now home to great-crested newts. Dragonflies are also prolific across the reserve from these ponds and wetlands.

It was too early in March for trees to be in bud but there were catkins and signs of plants and wildlife sensing the coming of spring. We saw a woodpecker, buzzard, plenty of smaller birds and pairs of geese beginning to nest at The Lake in the Lincolnshire Co-operative Wood. Rod explained that in spring and summer the verges and glades are ablaze with a huge variety of meadow flowers and alive with butterflies, bees and other insects. One of the ideas for a project which Lincolnshire Life could become involved with is to build a raptor house which would provide a high, secure place for owls to nest. Hopefully, more on this to follow in a later edition.

There is always plenty of work for volunteers to undertake including coppicing, pruning, helping to maintain pathways and mowing. Signs ask visitors to be respectful of the countryside and its inhabitants but with numbers peaking in the summer months there is litter and dog waste which some people leave behind which needs to be collected. If you would like more information about becoming a volunteer there is more information on the Trust’s website www.nettlehamwoodlandtrust.co.uk

Ashing Lane Nature Reserve is a great testament to the community effort which has embraced local partnerships and created this haven of managed woodland and countryside on the doorstep for village communities north of Lincoln. Rod more than anyone knows that planting trees is an investment for future generations and as Lincolnshire has one of the lowest densities of woodland and trees among counties in the UK, the reserve is playing its part to help address this imbalance.

In his spare time Rod is a woodturner and craftsman and he has an anecdote in his A Forester’s Jottings booklet which is sold in aid of the Trust, that two ladies spoke to him at a school autumn fayre after buying a wooden snowman: “We don’t know your name, but we know where you live and we call you ‘the tree man’.” It’s a title Rod is more than happy with.