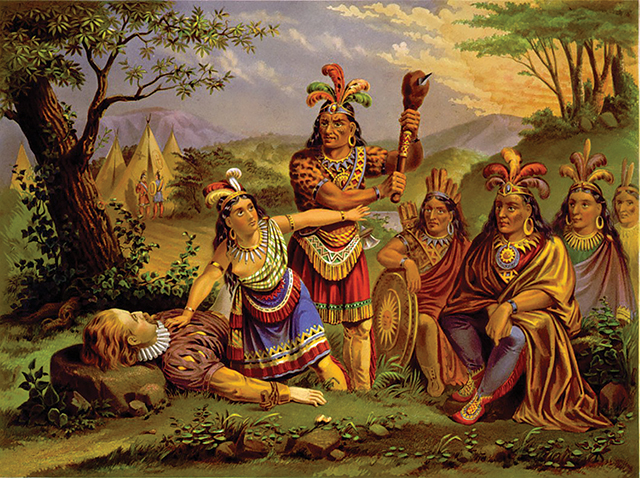 Pocahontas and the Lincolnshire Captain

In the early 1600s the Virginia Company of London began colonising North America in what would become the state of Virginia. Here the British changed the native Indians’ way of life forever, writes Dene Bebbington.

A young Indian princess could never have imagined how the arrival of newcomers would make her a legend after saving the life of an army captain from Lincolnshire.

Over a century after the “New World” of the Americas had been discovered by Christopher Columbus, the British began to colonise the new lands. Initial attempts failed, but the Virginia Company’s 1607 expedition founded Jamestown which turned into a permanent foothold on the continent.

Aboard one of the three small ships sailed Captain John Smith from Willougby near Alford. He’d been charged with mutiny, and avoided execution thanks to an order from the company that he should be one of the colony’s seven member governing council.

Smith – a swashbuckling character and self-publicist – played a key part in helping the settlement on the James River overcome perilous times. After two of the ships set sail back to England, Smith was among several settlers taken ill. He survived and took part in a mission to find gold, and to trade with the Indian chief Powhatan. There’d been an uneasy relationship with the native Americans who were rightly worried about the intentions and number of settlers who’d arrived from a distant land.

The mission was a calamity. Two men from the party were ambushed by Indians and killed, others tortured or killed, and Smith was captured on a riverbank while trying to retreat. Only his position as a leader spared him from the same treatment as his compatriots due to an Indian rule about how to treat enemies of certain ranks.

A period of captivity ensued. There were opposing views among the Indians on how to deal with Smith. Powhatan wanted to seek an alliance with the white men, while others would have him put to death and wage war against the invaders. To resolve this impasse they held a powwow. Its outcome would have been terrible for Smith if not for a young Indian girl throwing herself in between him and those who would club him to death, or perhaps more likely, carry out a mock execution.

The saviour was Powhatan’s “dearest” daughter, Pocahontas. A common practice was for captives to be adopted if they weren’t put to death – Smith’s supposed execution may have been part of an initiation ritual for such an adoption. It’s recounted that “Wherat the Emperour was contented he should live to make him hatchets, and her bells, beads and copper…”

Pocahontas’s motivation is unclear, it could have been a personal feeling for Smith or acting upon her father’s instruction. Whatever the reason, that act would change the 12 year old’s life.

Relations between colonists and natives were still troublesome after Smith’s luck in avoiding death. Some time later his luck turned bad when his powder bag accidentally lit from a rogue spark. Not only did this wound him, he nearly drowned after jumping into a deep river to quench the fire on his body.

Pocahontas was unaware that in September 1609 Smith was aboard a ship returning to England. Over three years later she was taken hostage by colonists on a trading mission, although she may not have tried hard to avoid capture. Afterwards she converted to Christianity, married the colonist John Rolfe whose wife had died in Jamestown, learnt English and gave birth to a son, Thomas Rolfe.

By 1616 the Virginia Company wanted to bring Pocahontas, who’d become known as Lady Rebecca, and a group of Indians including her brother to England. They hoped to garner more interest in the colony and more investment for the company which was close to bankruptcy.

Pocahontas wasn’t the first Indian to have been brought to England, but her arrival stirred up much curiosity. The Virginia Company feted her, and paid her living and medical expenses. She was introduced to King James I and Queen Anne, a privilege which saw her sit near them at a masque.

England, especially London, was very different to the life she’d had until then. She coped well with the culture shock, being at ease in royal circles. The English weather, London squalor and smog (King James called it the “filthie toune”) and prevalent illness took its toll on the dozen Indians who’d been brought from the New World, several of whom died over the coming years. Pocahontas came down with a respiratory illness. She and her party moved out to Branford in Middlesex away from the dreadful air of the capital. Legend suggests that Pocahontas went with her husband to Heacham in Norfolk where his family lived.

Eventually a decision was made to return to America as John Rolfe had been given the post of Colonial Secretary and Recorder-General. Belatedly, John Smith paid his respects to Pocahontas before they set off. It was an awkward and frosty encounter since she’d believed him to be dead.

Poor health continued to dog Pocahontas. Even as they set sail to America she was very ill with what may have been consumption. Her journey home only lasted until the ship reached Gravesend where she had to go ashore for medical treatment. Neither 17th century English medical knowledge nor traditional Indian remedies could save her. Pocahontas died in March 1617 aged 20 or 21 and was buried in St George’s Church.

Smith never returned to America but he promoted colonisation to the new world. He became an author, penning several works including an autobiography, a history of Virginia & New England, and seamanship.

The remarkable young Pocahontas could never have imagined how she would be mythologised centuries after her death. The subject of films, novels, songs, and even a video game, her name and short life retains a fascination. A statue of her was dedicated at St George’s Church in Gravesend in 1958, a replica of one erected at Jamestown in 1922, and Heacham commemorates her in its sign.