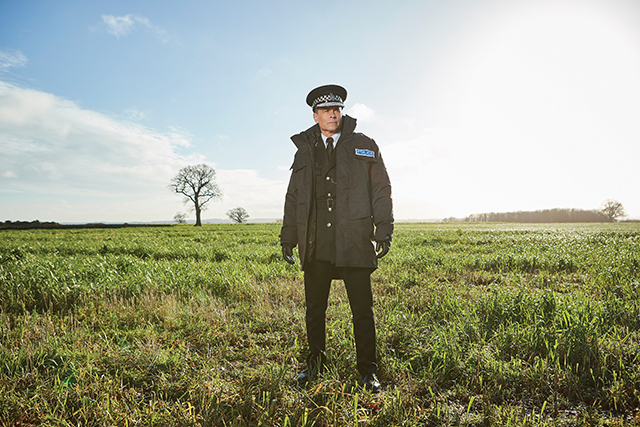 Lincolnshire is no stranger to the small screen and now it’s Boston’s turn to take centre stage. Kate Chapman talks to some of the stars of ITV’s new police drama Wild Bill, which is set in the town.
Starring and executive produced by Hollywood actor Rob Lowe, the show is a fish-out-of-water drama about US police chief Bill Hixon (Lowe) who is appointed Chief Constable of the East Lincolnshire Police Force, based in Boston.

Landing in the town with his teenage daughter Kelsey in tow, Bill is hoping they can flee their recent painful past. However, this unfamiliar, unimpressed community force him to question everything about himself and leave him wondering if it’s Boston that needs him or him that needs Boston.

Many of Boston’s landmarks including St Botolph’s Church, Market Place and some of its familiar cabbage fields also get plenty of screen time too.

Rising star Bronwyn James plays DC Muriel Yeardsley in the show and said she was attracted to the role because she loved how smart her character is and how she develops throughout the series.

“Even though she is a young detective from a rural background, she wants everyone to know how smart she is and what she’s thinking about,” says Bronwyn.

“When we first see Muriel, she’s kind of at the lower end of the totem pole, always trying to prove herself as a detective; she wants more responsibility.

“She proves herself to be trustworthy and the more we see of her the more she comes out of her shell – she becomes more self-assured.

“There’s one line of hers in particular which I really love; she’s walking down a street towards a church, with a sign saying ‘No women beyond this point’ and she just looks at it and says ‘I’m a police officer, not a woman’ and then she carries on – it’s great!

“Wild Bill is really unique, you cannot really call it a comedy or a drama – it’s a lovely middle ground. You can find yourself laughing at some really dark moments, when something scares you and then find yourself getting sad at some of the happier moments. There’s a really good mix and it’s very character driven.”

Bronwyn, who grew up in Wakefield, has wanted to be an actress since she was a youngster, and trained at Wakefield’s Cathedral Academy of Performing Arts and ARLA (Academy of Live and Recorded Arts).

“When I was younger I was obsessed with Indiana Jones and for a time wanted to be an archaeologist. I loved the Mummy films too, and all stuff like that, but I watched one and it scared me too much. So from then on I always wanted to be an actress, probably from around the age of 10,” Bronwyn recalls.

“I did a lot of musical theatre and then theatre college. So far most of my work has been TV but I want to do it all – lots of theatre and film too.

“I don’t know who was more excited when I got the Wild Bill role, me or my mum when I told her I had a part alongside Rob Lowe!

“It was wonderful working with Rob and everybody else. We had such a great cast, everyone was really generous with how they supported each other and the crew were a dream to work with too.

“I love Boston too, it’s so very different. It’s a small community and everybody knows everybody!

“You don’t get many cop shows set in rural towns – they’re usually in the big cities like London or Manchester, so it’s great to see this small community at the forefront dealing with some big issues.”

“You don’t often see places like Boston in TV shows, but it becomes a character in its own right and is just as important as the rest of the cast,” she says.

“I loved the Wild Bill script from the moment I read it. You have this cool character who swoops in, thinking everyone is going to be impressed because he’s American, he’s adamant he’s not going to bother getting his hands dirty – which is exactly what does end up happening.

“But my character, Lydia, for all intents and purposes believes that she’s the best person to take the Chief Constable role, as does everyone else.

“She’s completely qualified, Boston born and bred and knows all the local people – it’s basically her job. She probably joined the police as soon as she could at 16 and just carried on rising up the ranks but because she’s a woman and a person of colour she’s overlooked for the top position.

“She doesn’t want a chip on her shoulder getting in the way of her being a good police officer though and that creates a bit of a personal conflict for her, but as time goes on she forms a relationship with Bill where they’re almost like an ex-married couple and end up having to get on for everyone’s sake.”

Having grown up just over the county border in West Bridgford, Nottinghamshire, Anjli was also determined that acting would be the only career for her too.

She trained at the Carlton Workshops and her TV credits include Rani Chandra in The Sarah Jane Mysteries and Nadia Ali in the recent BBC drama Bodyguard.

“I wanted to be an actor from a really young age and now I’m getting older I’m more interested in the storytelling and getting into the subtext – depths of the character, and the heart of the matter,” she added.

“I’m really open to doing anything as long as the character and their story is interesting. I seem to find myself doing a lot more drama than comedy, which is probably what I’m more interested in, and what I watch more myself – I love all that. I just find it more fascinating.

“I loved making Wild Bill, the place, the script – everything. Now I just hope people enjoy watching it as much as we enjoyed making it, and fingers crossed we will get to do it all again and make a second series.”
Wild Bill starts this month on ITV.