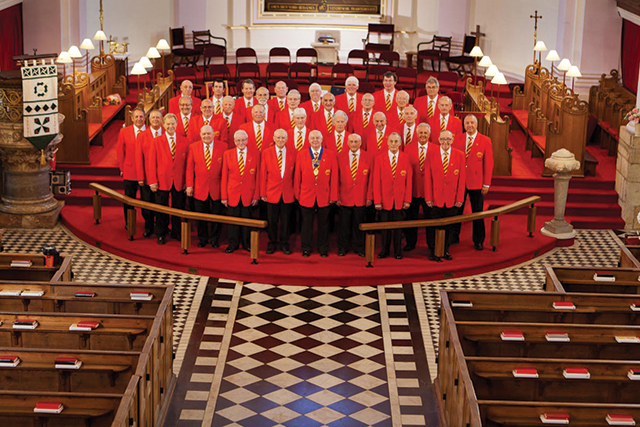 Power of song in steel town

Think of Scunthorpe, and what springs to mind? Well, there is the obvious and that is steel, or perhaps the football club as you follow their fortunes – but there are few who would associate the town with one of the most accomplished and historic choirs in the UK.
It is a fact that the harmonies of the Scunthorpe Male Voice Choir have been entertaining audiences across the world for the last ninety-three years – and it is the ambition of those who are a part of it now to see it survive and thrive for another ninety-three!

There are many in North Lincolnshire who will perhaps not realise the strength, depth and sheer vocal talent that exists in this steel town. The choir is unique in its ability to bring together an eclectic mix of men with one shared passion, the power of song.

From different backgrounds and all walks of life, the men unite every Thursday evening in a small corner of the town. Using the Church of the Resurrection, near Berkeley Circle, as their base, it is evident that they look forward to their weekly rehearsals. They arrive, greeting each other as old friends – friends who would have likely remained strangers but for the choir.

If an outsider were to wander in, it would be a challenge for them to guess the nature of the organisation as there are few signs of the majestic and harmonious music that is to come in the next hour.

Such harmony has been the standard of the choir since its beginnings back in 1924, when a gentleman called Denman Leeman was its first conductor – a position he held for forty-four years. During the Second World War, the choir remained strong – singing to raise vital funds for organisations, such as the town’s hospital.

As the years rolled by and the fortunes of the town ebbed and flowed, dependent mainly on the success of its steel industry, the choir remained a constant, taking Scunthorpe’s name across the world and winning international acclaim along the way. Names that will be familiar with choir members over the years include past conductors who followed the great Denman Leeman, including Charles Ware and Jeffrey Blewett – the latter had the baton in 1991 for a concert of massed male voices celebrating 100 years of steelmaking in the town.

As with many similar clubs and organisations, membership has seen a slight decline – a fact the present choir wishes to address as it looks to sing on to its 100th year. Today’s members want to reach out to the people of North Lincolnshire to taste the delights of joining this accomplished singing group, and in doing so they want to reassure potential new members, who may feel slightly intimidated when they hear just how professional this singing group is!

President, Paul Taylor said: “I remember feeling apprehensive when I was asked to join, I arrived for a rehearsal and almost turned around and walked away. But I did it and it has been absolutely fantastic, and that was fifty years ago. This choir has been my life, I have been widowed twice and it has kept me going.”

Mr Taylor is not alone in finding camaraderie, solace and sheer enjoyment within the choir’s fold – indeed for some it has been life-changing.

Keith Ellis, a member of twenty-six years’ standing, and his wife Yvonne were married in a small town called Dahlonega, in South Georgia, USA. They selected it for their big day after visiting with the choir – Keith first with the full team, and then again with a separate singing quartet.

“I have never looked back after first joining, and we just need to encourage a few more people to come and dip their toe in the water, that is what I did and it has been wonderful,” said Keith.

Roger Wilkinson is another long-standing choir member, who was persuaded to join by his wife, Anne and the then conductor Jeff Blewett, and he has some encouragement for those thinking about joining: “You don’t have to be a marvellous singer, if you can sing in tune and enjoy it, that’s what it’s all about.”

While for Gordon Slack, of Luddington, the group has reined in his former singing career, which consisted of rather vocal performances on the back seat of a rugby coach!

“I used to play rugby union and my singing at that point was rather raucous and usually on the way home,” he recalled. Gordon is, in fact, now a member of three different choirs.

Meanwhile there is one present choir member who has kept a secret about his family history very quiet over the years – 74-year-old Vic Westfield, of Broughton, is actually a distant relative of the very first conductor and founder, Denman Leeman.

“The link goes back through my dad’s side and he was alive in my lifetime, but I never actually met him – it is a fact not a lot of people know, but perhaps that is where the interest comes from,” said Vic.

With a whole mix of personalities and styles, you might think it difficult for the present conductor, Daniel Fields (26) to keep his choir in check – but not at all, says the teacher at St Bede’s Catholic Academy.

“They are a very friendly bunch to work with, a very open and welcoming choir,” said Daniel, who is also on hand to advise the latest recruit – 25-year-old pianist and accompanist, James Longden, who joined the team following the retirement of two long-standing members, Ann Rook and Margaret Walker.

The accomplished music teacher looks forward to his choir evenings and encourages other younger musicians to join. He said: “There is a real social aspect here as well as the music, they are a very friendly bunch and those who come along always enjoy themselves.”

The Scunthorpe Male Voice Choir is performing a series of concerts this year. For a full list and further details on how to join, visit their new website at www.scunthorpemalevoicechoir.com