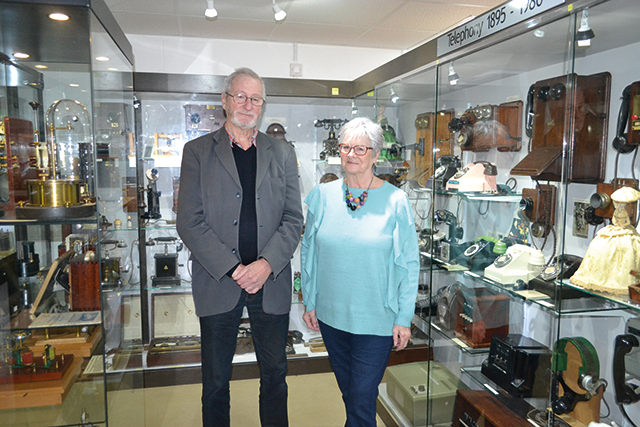 Technology has evolved tremendously in recent years – but Kate Chapman has spoken to one couple determined to preserve some of the earliest gadgets and machines which have helped shaped our lives at their own unique museum here in Lincolnshire.
Among the curiosities on display at the Museum of Technology, The History of Gadgets and Gizmos are some of the earliest cameras, telephones, computers, televisions, a large number of valves, weaponry and other items from World War One and World War Two, which have all been collected by Trevor Cass and Rosie Hourihane.

The couple, who moved to Throckenholt, near Spalding, in 2011, brought their collection of more than 1,500 items dating from 1850 to 1980 with them and spent five years planning and building a space in which to showcase them to the public.

The museum, which opened in 2016, covers the period of the technological revolution and traces the progress of electronic and engineered artefacts featuring items related to telegraphy, telephony, audio, military and civil communications as well as warfare, photography, scientific and electrical domestic equipment.

“Our museum offers people the chance to step back in time – we have a great interest in engineering and items of telegraphy and the history behind them and we want to be able to share them,” says Rosie.

“Our eclectic collection has something for everyone to enjoy, both young and old and everyone in between.

“We welcomed our 1,000th visitor last August, which is pretty good for a small museum tucked away in the fens, and the reaction we have had from people visiting us has been wonderful. They are just amazed by the vast array of different technologies which have evolved during the past 150 years.”

The museum was borne out of Trevor’s passion for collecting vintage pieces of technology, which began when he was just a child. It wasn’t until he met Rosie that he was encouraged to put his treasure trove of old telephones on display at his business in Hemel Hempstead.

“Trevor had put these telephones – which I think are works of art – up in the loft. I told him that was criminal and that they should be on display,” recalls Rosie.

“So they went on show in a redundant sales room. Then we really started collecting in earnest in around 1999, attending specialist fairs, mostly in the UK, although a lot of the items we have come from donations.

“People have died and bequeathed in their will that their pieces should go to a museum, and that’s why our collection has grown so big.”

After putting more pieces from bygone eras on display, Rosie and Trevor, who previously worked in engineering, were visited by a museum development officer who suggested they protect their valuable exhibits. As a result they became a registered charity in 2004 and following that an accredited museum.

With their retirement looming they had to make a decision about their future and that of their museum, which by now had outgrown the building it was housed in.

With a desire to live in the countryside they eventually found an old barn complex ripe for development at Throckenholt, with accommodation for themselves on site.

“The museum flourished in Hemel Hempstead for over ten years, but as the collection grew we knew we’d have to find larger premises, but these were hard to come by, so the decision was made to build a place which we could fit it into,” explains Rosie.

“We moved here in 2011 and got planning permission to knock the barns down and started work on the build in 2012.

“We were two years kitting the place out – Trevor made all the cabinets himself – installing cabling, underfloor heating and putting in the toilets and a small cafeteria.

“The collection moved here in 2014. We’d packed all the items away in boxes ourselves for moving and when it came to opening them it was like Christmas as we rediscovered pieces we’d forgotten we had. It was magical getting them all back on display.”

Each artefact has been cleaned and restored, and where possible is in full working order, and every one logged in the museum’s vast database.

All the items on display are labelled and anyone wanting more specific information about a piece can find it on the museum’s comprehensive website, or ask Rosie and Trevor during a visit.

As well as showcasing their pieces the couple have, with thanks to a grant from the Wryde Croft Wind Farm Development Fund, created a community room for groups and organisations to use during their visits.

Here films can be shown via a projector, and Rosie and Trevor have also created a selection of reminiscence boxes, which have been found to help those suffering with dementia.

“We’re delighted to have this community room – it’s available to any groups that want to come and use the facilities for a nominal charge,” adds Rosie.

“We’re a non-profit making organisation, so just need to cover our own costs. But it is here for any care homes who want to come and visit us, and other dementia groups, charities and schools too.”

Rosie and Trevor, who open the museum three days a week from May to October, are also helped by a small band of five dedicated volunteers who give up their time to man the cafeteria and chat to visitors.

“If you remember A & B phones, crystal sets, gas masks, Morse keys, frame aerials, then you will want to see our collection of early technology,” says Rosie.

“We offer something to amaze all age groups, and we’re sure you will leave with the immortal word ‘wow’ on your lips.

“We’ve spent the winter restoring and cleaning the collection and the museum and we’re really looking forward to welcoming lots more visitors in the coming months.” 

Opening hours are 10am to 4pm Thursday, Friday and Saturday May to October or by appointment for groups of ten or more with admission £5 for adults, £2.50 children and under-5s go free.