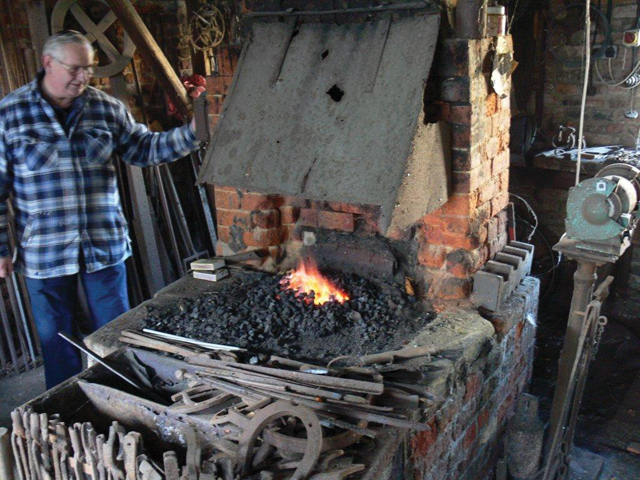 Preserving the heritage of ‘Mr Fixits’

Stepping through the door of Chain Bridge Forge, Spalding’s only remaining blacksmith’s workshop, is like being transported back in time 200 years.
Unless you know it’s there the small brick building, nestling alongside the River Welland, is easy to miss. Steeped in history, Chain Bridge was one of thirteen forges in the town and dates back to around 1800. Today the walls are still lined with the numerous tools of the trade, many of which were probably used by the first blacksmith and it is easy to imagine him slaving over the fiery forge and shoeing horses there.

Geoff Dodd, a third generation blacksmith and the last to run the forge, still lives opposite the workshop in one of the cottages, which was also inhabited by his grandfather. He gave me a fascinating insight into his working life at the forge.

Since his retirement Mr Dodd has been acting as custodian/caretaker of the site in High Street and has always been keen for it to be preserved, so future generations can learn about the trade and heritage of the area. And now a community group has been formed to do just that, much to his delight.

The Friends of Chain Bridge Forge have already received some financial support and have applied for a £50,000 Heritage Lottery Fund grant to help realise their dream of turning the workshop into a living museum.

Spalding resident Geoff Taylor, who is leading the project, says it is vital that the story of the forge is told so that the way of life, which is sadly receding from living memory, is recorded and preserved. He is working closely with Mr Dodd to trace the story of the building, the Dodd family and the social history of the area surrounding the workshop.

Mr Taylor said: “When I first visited the forge, on a heritage day, I just thought ‘wow’.

“The blacksmiths were the ‘Mr Fixits’ of the day. Their trade will never be what it was but there’s a resurgence in their technologies and techniques, which people value, and we need to retain that information. That’s why we want to record the history of the forge, the blacksmiths and the area around it. It’s got to be preserved as a working, living entity.”

Chain Bridge Forge is believed to take its name from a nearby footbridge crossing the river, which was originally made of chains. Artwork suggests it was a drawbridge designed to allow boats and barges to navigate up the river from The Wash.

The forge is believed to have been purpose-built and belonged to Joseph Rose in 1800. Records show Francis South as the blacksmith in 1826 and Mr Dodd’s grandfather, George Robert Dodd, bought the forge in 1898.

Mr Dodd recalled how his grandfather initially took a blacksmith’s apprenticeship at Swineshead, near Boston, because the family farm was unable to support him and his five brothers.

He said: “At the end of the apprenticeship he was a journeyman at Newmarket, which was a very well paid job and he had enough money to set himself up in business. In 1898, when he was thirty, he bought the business in Spalding.

“It was an agricultural area and he made chicken houses and tumbrels, and there was a lot of horseshoeing. I don’t know whether he employed one man or two, but he certainly had an apprentice.”

The forge was a thriving business as many people owned horses, using them on the land and for transporting produce. Most repairs of the day would also have been carried out by the blacksmiths, including those to the sloops carrying goods up and down the river.

Mr Dodd’s father, Banks Dodd (known as Jim), joined his father in the workshop when he was sixteen. He gave up an apprenticeship as a precision engineer to help out at the forge when his father was shorthanded.

With the advent of the twentieth century Mr Dodd said the nature of the blacksmith’s work began to change – and the business adapted to provide more agricultural repairs, work for builders and car repairs. The business records from the time show the names of car garages starting to crop up more regularly.

Like his father, Mr Dodd followed into the family business somewhat reluctantly – he too having hoped to take up a career in optical precision engineering – but in 1947 he was recalled from his National Service to work at the forge after his father was taken ill. His grandfather, who was eighty-one, was still helping out shoeing the odd horse but sadly died the following year.

By the 1950s Mr Dodd was considering closing the business, but a new lifeline and challenge was thrown to him by the advent of the Spalding Flower Parade. He didn’t see the first event but recalls building two floats for the second and within a few years found himself constructing the framework for around ninety per cent of the floats – something he continued to do for many years, sometimes working fourteen hours a day, seven days a week to get them finished on time.

Other work at the forge began to tail off, but Mr Dodd continued his involvement with the parade until he was seventy-two, by which time the workshop was starting to fall into a state of disrepair. It was then he made an agreement with South Holland District Council, which bought the building from him in 1989 for a nominal fee of one pound, on the understanding it would be preserved.

The roof was repaired but attempts to do anything else floundered until now. Mr Taylor, looking for a challenge in retirement, took up the project and formed the Friends.

As well as appealing for memories and photos of the forge, those that worked there and the surrounding area, the group also opened up the building to a steady stream of visitors during this year’s Spalding Flower Parade.

Mr Taylor added: “The forge was in a very vibrant, important part of the town; we want to be able to tell that history and that of the blacksmith in a living museum – if we’re not careful it will be lost. We want to hear from everyone with memories and photos so that we can preserve this wonderful building for future generations.”

To find out more or to contact the group with your memories of Chain Bridge Forge, visit www.chainbridgeforge.co.uk