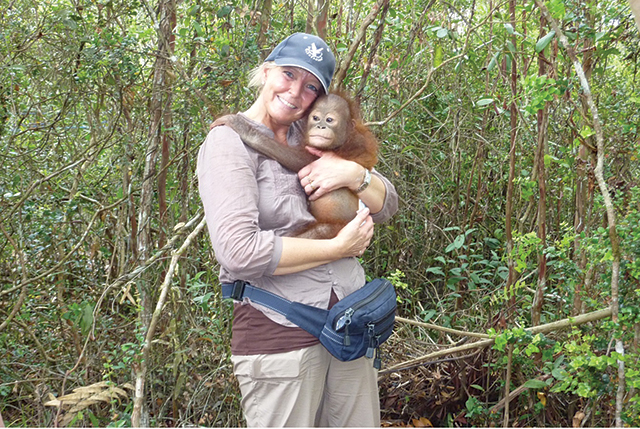 It’s a far cry from the Lincolnshire fens where she’s always lived, but Steph Brown feels such a connection to the exotic climes of Indonesia and its orphaned orangutans that she’s dedicated almost 20 years of her life working to protect this special environment and its endangered inhabitants.
Passionate about wildlife from an early age, Steph would often bring injured creatures back to her parents’ Holbeach Fen home to administer her own special brand of TLC. Her love of nature continued as she grew up and became a mother herself three times over, but it was a documentary featuring the actress Julia Roberts which changed her life forever in 1998.

“I couldn’t be a vet as I don’t like blood but I’ve always wanted to help animals,” explains Steph, who lives in Whaplode, near Spalding.

“I watch every wildlife programme possible and happened to see this one with Julia Roberts in Borneo. She was lying in a hammock with a tiny orangutan baby and I knew right away that I wanted to help these creatures.

“I was devastated to learn that so many of them needed rehabilitating and I immediately wanted to be involved.

“I rang the number at the end of the film and before I knew it I was on my way to Indonesia as part of a group of students to find out more about how and why they needed rescuing.”

Poachers, illegal logging, mining, forest fires and the rapid expansion of the palm oil industry have all played a part in destroying the rainforest where the orangutans live, forcing them to the brink of extinction. Thanks to the Orangutan Foundation – which was set up more than forty years ago to help their plight – the effects of this mass devastation are slowly being reversed. The charity works tirelessly to raise money and is currently protecting 463,000 hectares of land in Central Kalimantan. It has re-introduced more than 325 orangutans back to the wild, and even though they only give birth around every eight years, sixty-five babies have been born onto the reserve, helping ensure the future of the next generation, says Steph (55).

Orangutans live in the treetops where they build their nests, when these are cut down many adults fall, sadly dying of their injuries, while their babies, clinging to them are left orphaned and hurt. To ensure their survival, the charity runs a research programme and also funds a clinic where surrogate mothers feed, sleep and play with the babies until they are ready for the next stage of rehabilitation.

This sees them moved to a nursery environment where they learn vital survival skills including tree climbing, nest building and foraging for food before they are released back into a protected area, which includes the Lamandau Wildlife Reserve – one of the few places where they can be safely released.

Steph’s first trip to Borneo was back in 1999 and since then she has returned several times to carry out research and assist in the clinics. She now feels so relaxed travelling out there that she stays with a local tribe, living in huts on stilts.

“I just wanted to follow in Julia Roberts’ footsteps – my husband Ian thought I was slightly crazy,” recalls Steph, the Lincolnshire ambassador for the Orangutan Foundation, having raised more than £7,000 to support its work.

“He was concerned for my safety, and being away from hospitals and other facilities, but I went with the foundation, as that’s the best way to start to learn.

“Now I go and stay with a Dayak tribe – I live with them and they treat me like a princess! They give me a welcome party with all the traditional gear, they are such lovely people.

“I’ve had to learn the language which has proved interesting – the first sentence I learnt was ‘Where’s the toilet?’ and then they pointed to a hole in the ground!

“Some people believe they have lived more than one life – I believe mine was living there; I feel very relaxed and happy out there.”

As it can take her around a week to reach her remote destination, Steph usually visits Borneo for a month at a time, and is planning to return again next year when she hopes to be reunited with a baby orangutan which has been named after her.

“I love staying out in the forest – to hear the call of the morning from the orangutan miles away is wonderful, while the long call is the most amazing sound in the world while you’re trying to get to sleep in a hammock; you just hear so many fabulous things out there,” says Steph.

“Orangutans are so close to us; they are not aggressive like chimps or gorillas, but very solitary animals. The only time they fight is if they are challenging a peer for the title of king of the area.

“He looked straight at me while he was climbing a tree and he recognised me. That was a really heart-stopping moment. I had a really good connection with him, so I want to try and make sure I visit him again,” she adds.

“If I can rehabilitate ten in my lifetime that’s ten more that can go on to have babies and that’s a lovely feeling.

“My family and friends have always been very supportive of my passion; I couldn’t do it without all these lovely people, which is why I’m always thanking them.

“I just love looking after the animals – I’m always smiling when I’m talking about it.”

Following her next visit Steph plans to resume giving talks about her work in Borneo with the Orangutan Foundation and also sells a DVD she has made about the trips, which are available for £5 each with all the proceeds going to the charity.

To find out more about the work of the Orangutan Foundation visit www.orangutan.org or contact Steph directly on 07885582978.