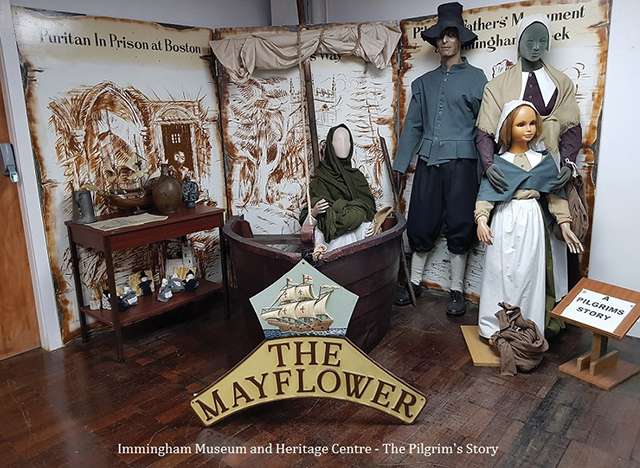 If you ask the person in the street about Lincolnshire and the Mayflower Pilgrims, their answer will more than likely refer to Boston. Of course, Boston has always featured prominently in the story, but now, thanks to Malcolm Cullum at Immingham Museum and Heritage Centre, the Pilgrims’ time by the Humber is going to be much better known.

The connection of Immingham to the Pilgrims has always been known and acknowledged. There has been a memorial at Pilgrim Park in Church Lane since 1970, and before that was established the memorial was at Immingham Creek. Of course, local people have been aware of the story for many years, but now is the time, in this significant year, to lift Immingham out of the shadows into the limelight.

Malcolm puts the situation very vividly: “Immingham is sometimes missed out of the Pilgrim Fathers’ story, being tucked away in the top corner of North East Lincolnshire, but is very important to their journey to the New World. Although they left Immingham in 1608 the town is very much joining with the rest of the county in celebrating Mayflower 400.”

Events planned for the coming year include a Mayflower Walk, a flower festival, a Mayflower Gala Weekend (in June) and some tree planting. The celebrations are a unique opportunity for the award-winning Immingham in Bloom team to show off their skills.

This is all possible because the town has received £27,000 for a major new display, which will have models, boards and interactive elements, which will appeal to both adults and children. By the time this reaches print, Immingham will have participated in the November Illuminate parade, but Malcolm is delighted by the town’s chance to make the world more aware of the local connections with this huge global event.

Malcolm is chair of the Trustees of Immingham Museum and a town councillor. He has been at the centre of these celebrations since 2014 when he was invited to Plymouth to sign the new compact between Plymouth and America. The memorial at St Andrew’s Church was created by the Anglo-American Society in 1924, and little did the people then know what a revolution in family history would take place when the internet arrived.

Today, that bold sailing in 1608 – led by a Dutch captain, and with only the male Pilgrims on board, in advance of a later trip when the women and children would join them in Holland – is a massive landmark date in the history of both Immingham and the world.