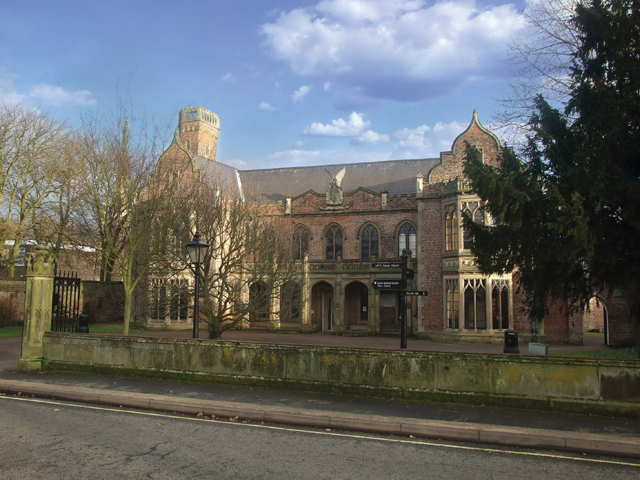 Quarter should be roaring success

An innovative new £7million complex in South Lincolnshire is due to throw open its doors on 2nd March.
The Red Lion Quarter in Spalding – which has a food heritage centre at its heart – promises to be great news for local people who are keen to polish their skills and businesses looking for up-to-minute, town centre space.

South Holland District Council said the multi-faceted complex, which has taken a year to build, is a real plus for the local economy, including the food sector, for which Spalding is so famous, and other-related industries.

Economic development officer Bruce Wakeling said the three-storey Development in Red Lion Street has been purpose-built and is fitted with the latest equipment.

And Boston College is delighted to be providing a wide range of courses at The Red Lion Quarter.

Mr Wakeling said: “The top floor features a range of fourteen managed offices, which are available to any interested businesses. They are modern and served by a central reception and a communal kitchen. Some have their own balconies overlooking the town, which is good for businesses being visited by their clients.

“Boston College has taken the first floor, where there are a series of lecture rooms and also three meeting rooms, which can be hired by businesses, groups and organisations.”

The College will be offering people a variety of choices, including those for students who are keen to make a career for themselves within the restaurant, catering and food retailing industries.

“This is the District’s first Further Education facility of this size and standing.

“That is important. Now we have got this, it will save people time and money, because they will not have to travel to Boston, Grantham and Peterborough to do courses.”

A major attraction on the ground floor is SAGE, an eighty-seater training restaurant, which will be open to the public as a café in the daytime and revert to a restaurant later in the day, when it will serve dinner.

There’s a real buzz about this venture, which will offer students high-class training, because it is being supported by Lincolnshire-born, star-rated celebrity chef Jason Atherton.

Another attraction on the ground floor is a Food Hall, which will offer everything from meat to vegetables and dairy produce, mainly sourced from Lincolnshire and Norfolk.

And there are three small retail outlets too, for foodie businesses which are not only interested in promoting and selling their goods, but in demonstrating to visitors how they are made.

A Community Interest Company has been set up to handle the leasing of the top floor office and ground floor retail units, as well as the hiring of the meeting rooms. Anyone interested in finding out more should contact Richard Baggeley on 01775 764802.

South Holland District Council is also working with the County Council on upgrading Red Lion Street itself, in a project which will include repaving, new lighting and new street furniture.

Boston College marketing manager Mark Emmerson said it is only now that the true scale of the thrilling Red Lion Quarter development, which has a light and airy atmosphere, can be really appreciated.

In addition to vocational and academic courses, Boston College will be offering professional and occupational courses, such as apprenticeships and a wealth of business-focused commercial courses, which are aimed at benefiting employers and their workers.

“Our training restaurant is fitted with state-of-the-art catering equipment and it will be offering the foodies amongst us all a gastronomic experience which is not to be missed,” said Mr Emmerson.

“The retail areas, business units and food court have already attracted the attention of numerous companies.

“And several local businesses have already enjoyed the economic benefits that this project has enabled – with £1.6m worth of orders already placed with local firms within twenty miles of the site,” he added.

South Holland District Council is also talking to the owner of land neighbouring that owned by SHDC in Gore Lane, near the town centre, to see if this could be potentially developed for retail purposes. Interest has also been shown by a major developer in two other areas of the market town.

Mr Wakeling said Spalding as a whole is currently attracting a lot of interest on the retailing front, which could ultimately help to bring new jobs into the area.

Adams is another long-standing name, whose business was split and sold to Dalehead Meats and Kerry Foods, but it is still based locally.

And every day 2,000 lorries leave the Spalding area to make deliveries to food distribution centres around the UK.

Arrangements are already underway for what will be the fifty-third flower parade and there are lots of exciting events planned which promise to add another element to this already historic and popular event.

This year the theme is British Icons and design teams have already been busy working behind the scenes. The first floats are being built and they include those reflecting ‘An English Country Garden’ and ‘A Day at the Seaside.’

Spalding and South Holland are hugely significant within Britain and the aim is to celebrate their heritage and Britishness in this year’s parade. Organisers say people should be “prepared for a few surprises” when the parade starts its journey from the Springfields Events Centre at 2pm.

A spokeswoman for the event said: “We’ll be blowing our own trumpet, literally, with a specially-commissioned fanfare composed by Peter Seabourne, appropriately entitled ‘Mille Fiori’ (A Thousand Flowers).

“Peter is Head of Music at St Hugh’s School in Woodhall Spa and he was the perfect choice for creating the music for our very own Floral Dance.

“The search is also underway to find the Prince and Princess for 2011 and the Flower Queen. The overall winner will be crowned Flower Queen 2011 to the sound of our unique trumpet fanfare.”

Anyone dreaming of entering the competition to become Spalding’s Flower Queen, needs to be be seventeen years old or over and live in the PE11 postcode area.

Entry forms can be downloaded at www.spalding-flower-parade.org.uk or you can request a copy by calling (01673) 828764.

The six finalists and their guests will be invited to a daytime reception on Friday, 25th February at Ayscoughfee Hall in Spalding, where each will receive a gift voucher and a bouquet of flowers. They will also take part in the parade as the Queen’s attendants.

Whoever is crowned Flower Queen will receive a fabulous array of prizes, including an Apple ipod Touch and a day of beauty at Kenwick Health and Leisure Club in Louth.

SHOPPING
Spalding, which is home to about 28,000 people, enjoys pride of place in the South Lincolnshire fens.

The area is well-known for its horticultural, agricultural and food processing companies, but it is also a destination which offers a great mix of shopping and sightseeing.

The town centre, with its mix of Georgian and Victorian architecture is both easy and pleasant to explore. Here you will find a wealth of well-known, multi-national stores and superb independent businesses, such as Hills – the family-run department store – and the bookshop, Bookmark.

Or you might prefer to join the crowds which regularly make a beeline for Springfields on the outskirts of the town, where they can enjoy outlet shopping, make the most of the attractive gardens and even book themselves into the on-site hotel.

If you want to visit both areas, you can boost your leisure experience, by travelling from the town to Springfields (or vice-versa) on board one of the popular water taxis.

If you want to be entertained, the South Holland Centre, in the heart of the town, offers an ongoing, varied programme, with something to suit most culture vultures.

Spalding has also recently benefited from the opening of The Johnson Community Hospital in Spalding Road, Pinchbeck, which has replaced the former Welland and Johnson Hospitals.

TOWN & COUNTY ENGINEERING SERVICES LTD
Town & County is a family run business with a corporate policy and outlook which has been based in Spalding for thirty-five years supplying and servicing the surrounding industry with engineering parts and equipment. The business was born in Spalding town centre and then moved out to Benner Road Industrial Estate in 1982 and then onto Wardentree Lane where it currently operates from its well appointed premises.

Since humble beginnings in 1976 we have grown the business to a well respected level from both customers and suppliers, constantly expanding our product range to suit customer requirements year on year and have watched surrounding customers grow with us, some who still have original family ownership and others that have joined national PLC companies or even global companies. We would like to thank these businesses for their loyalty towards Town and County and we hope that the service we have provided over the years has played its part and supported them in order to meet their goals and ultimate success for future years. It is our goal to be as good as we can be with the great team we have at Town and County and we always say “Our aim is your satisfaction”.