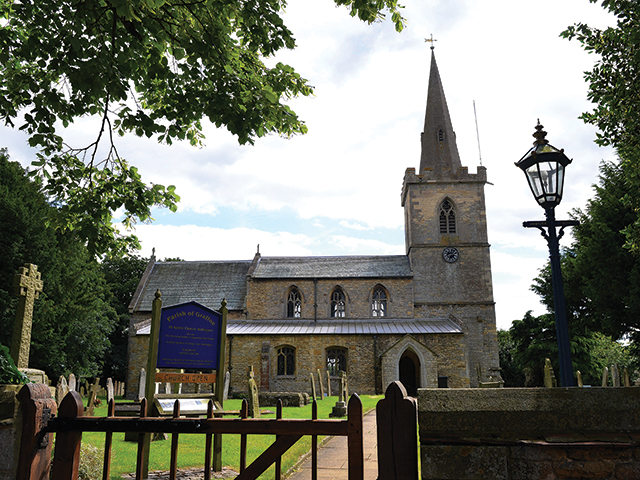 Anyone who has driven north along the A607 Cliff Villages route between Grantham and Lincoln will be familiar with the picture postcard sight of All Saints’ Church, Wellingore perched on the south facing edge of the Lincolnshire escarpment as you approach the village.
The oldest parts of the church date from the late twelfth and early thirteenth centuries with further major renovations and alterations being made in 1878 and 1924. There is now an opportunity to bring features of the church up to twenty-first-century specifications through a community fundraising project which was launched in September.

The aim is to increase accessibility for as many people as possible. Plans have been drawn up to install wheelchair access, food service facilities and a disabled toilet, which will mean some internal reconfiguration of the existing vestry and seating.

Patron of the fund is Air Vice-Marshal Gavin Mackay who explained: “The steep step down into the church and lack of modern facilities hinders access and community use of All Saints. We want this beautiful and ancient building to be more widely appreciated. There are already many creative ideas being put into action to raise funds. These will build on a generous, anonymous donation which kickstarted our appeal.”

A group of seven local women have created a dazzling quilt in a design called ‘Firecracker’, which is being raffled this month to raise funds. Wellingore resident Charlotte Ridler has made patchworks and quilts for many years and used the project to pass on her skills to others.

She said: “Most of the fabrics came from my own stock but I bought the reverse material on a visit to Senegal. We only needed to purchase the blue for the sashing and wadding. The squares were made, some with machine and some with hand stitching and the final quilting was completed with a running ‘Sashiko’ thread in red through the middle of each sashing section.”

The raffle to win the quilt, which is large enough to cover a single bed, will be drawn at an Access for All charity concert on Friday 2nd December at 7pm in the church.

An ensemble of two quartets (woodwind and brass) from The Band of the Royal Air Force College will perform an Advent Fanfare of seasonal music and carols.

The target date to have sufficient funds raised and the work complete is 2018.