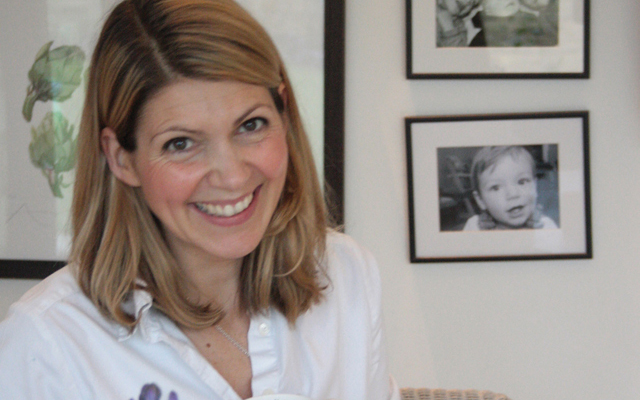 Lincoln born, Sophie Allport, has turned her talent for illustration and design into a thriving business which is definitely a family affair
I met designer and illustrator, Sophie Allport, in the home she shares with her husband and three young sons, all aged under six. To say she has a lot on her plate would seem an understatement but Sophie made coffee for me and started to describe the twists, turns and hard work that has created her family-led business, Sophie Allport Limited.

Sophie is a Lincolnshire girl, born and bred and her father was a well known, Lincoln-based chartered accountant. The family lived at Potterhanworth and Sophie attended St Joseph’s Convent before moving to Lincoln Art College to take a foundation art course. She showed me one of her early watercolours now hanging in the kitchen, clearly identifiable as a view of the cathedral from the east side of the city across the fields and that expansive Lincolnshire sky.

“I did a lot of landscapes when I was younger and also illustrations in ink and watercolour of local houses. It was a good way of making some money as well as appreciating just how many beautiful houses there are in the county,” Sophie explained.

In 1994 Sophie graduated with a first in Graphic Art and Design, specialising in Illustration, from Leeds University and headed for London to look for work. Illustration is a notoriously difficult sector to break into and Sophie produced a lot of speculative work for agencies. Slowly her commissions built, producing work on behalf of magazines, well known names including Harrods and designs which appeared on mugs for Stoke on Trent-based pottery, Hudson and Middleton. She still continued with her painting and her London cityscapes were exhibited in galleries and produced as limited edition prints. Through a friend who worked for Country Living magazine, Sophie was invited to one of the first Country Living lifestyle exhibitions which was being organised in London. Sophie decided to produce versions of her paintings and illustrations as cards to sell on her stand which proved to be very popular and customers loved the natural themes and subjects.

During this time Sophie married and had produced two of her children but the death of her father and the desire to raise her sons in the country, closer to her mother, led the family to relocate north along the A1 corridor, finally settling in their barn conversion in Fotheringhay two years ago. Sophie finds the surrounding countryside a return to her childhood roots and definitely the origins of her design inspiration.

“I think my designs are quintessentially English in that they are inspired by nature and gardening, clean and colourful but they have character and humour too. As well as Busy Bees, there is a Busy Butterflies range, Chickens and Strawberries and Cream as well as more than ten different mug designs.”

Four years ago Sophie’s brother, Jem Allport, joined the business. A qualified chartered accountant, Jem, has supplied the business acumen and drive to expand sourcing and sales of the Sophie Allport range, leaving Sophie free to concentrate on design and product development. Altogether, they now employ six family members based at their head office in Casewick, near Stamford.

Sophie told me how the business has grown with the belief in producing ‘lovely things for a lovely home’ which describes exactly the ranges of crockery, linens, fabrics and cards they currently offer. “I started to design my own range of mugs and the first fabric we produced was the Busy Bees motif that is still one of our best selling ranges. Some of our goods are made overseas but all our china is manufactured in the UK, our cushions are made in Lincolnshire and our pinboards are produced by a lady here in the village,” added Sophie.

The company still exhibits at the Country Living Shows and at events including Burghley Horse Trials and Chelsea Flower Show. The ranges are available through their website, in many independent gift and kitchen shops across the country and larger retailers such as John Lewis. The Strawberries and Cream design has been adapted this year to include tennis balls for a range exclusive to the All England Lawn Club for sale at Wimbledon.

This is not Sophie’s only famous commission. She personally presented Prince Charles with a pen and watercolour painting of Hurtwood Park Polo Country Club when he first visited their ground. Now the royal wedding, next month, has inspired Sophie to produce a Kate and Wills commemorative mug. I did say that I thought it was far too tasteful for a royal wedding souvenir but luckily I was not the first person to say this. Sophie explained: “I wanted a design that was different, would not date and would be lovely to use everyday. The icons I have chosen include a tiara, bunting, the ring, the union flag, champagne, the date and a congratulatory message inside the rim. The compliments we have received have been wonderful.”

The mugs are a limited edition and their first product that has a shelf-life. They are selling well so this may not be their last venture into this market.

It has been a very hectic four years for Sophie. A third son and a quickly expanding business but with the support and involvement of her family it has been very exciting.

“My business has gone from being predominantly card based to mugs, china and housewares. Our new melamine children’s ranges are selling very well and I have lots of ideas for designs and products that I will be working on during this spring and summer.”