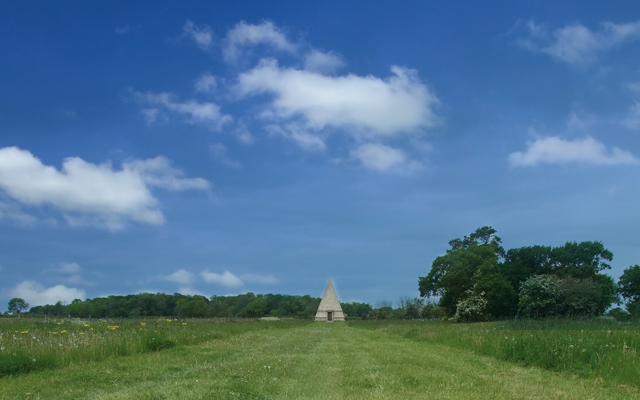 Recent visitors to Doddington Hall will have seen a new landmark on its landscape. Caroline Bingham went to meet Antony Jarvis, creator of the estate’s Pyramid.
It is always a treat to visit Doddington Hall and wander around its beautiful gardens. My visit coincided with the start of Iris Week and the stunning display in the Walled Garden could easily have distracted me, but I was standing amongst the trim box hedges and lawns to admire Doddington’s new folly, or eyecatcher, a pyramid set within the parkland at the end of a 1,000-metre avenue running west from the house which has recently won a Hudson’s Heritage Best Innovation Award.

Antony explained some of the history of the landscape around the Hall: “Doddington was first illustrated in a volume of engravings of English country houses published in 1707 by Johannes Kip. The house was about 100 years old then. Doddington is smaller than some of its grander cousins and where necessary Kip resorted to elaborate landscaping to help fill the page. He added a magnificent avenue leading west into the setting sun, through a deer park full of prancing stags. It appears to reach the River Trent which is six miles away.”

When Antony and his late wife, Victoria arrived at Doddington in the 1970s they faced a daunting task of reversing the effects of wartime neglect and making the estate self-supporting; a task not helped by that decade’s financial crisis and a threatened capital tax on farmland. Antony recognised, though, that there could be a new future for the heritage qualities of the estate and his experience as an architect told him the symmetry of the hall offered an ideal site in which to finally make the avenue a reality.

At this point Antony drove me through the parkland until we reached the final mown run of the avenue leading up to the pyramid. From the garden it had looked a glinting exclamation at the end of the converging lines of the avenue but at closer quarters the scale and detail is fascinating.

Antony explained that identifying the lines for the trees had been undertaken one autumn in the 1970s, after farmland had been cleared and hedges trimmed. He knew immediately that the avenue cried out for an eyecatcher at its far end.

“There was more important work to do though and it was another ten years before the route of the avenue had been cleared. Broad leaved lime trees were our first choice but they were not happy in our climate and they are now replaced with upright-growing oaks,” he said.

“We still had not decided on the best structure for the eyecatcher. We looked at a whole range of potentially suitable buildings – obelisks, columns, temples, ornamental cottages and even a farm building disguised by a classical façade. Our solution would need to be a building that was four square or in the round, not just a theatrical façade, and the idea of a pyramid became favourite at an early stage.”

A suitable material for the build also seemed a problem. The cost of dressed stone was prohibitive but when the concrete floor of a former grain store was being cleared, Antony noticed that this was not the usual drab battleship grey but a soft buff colour similar to the weathered Ancaster stone used in the Hall.

“It dawned on me that this material could make a very attractive substitute for genuine stone. We could build a convincing ruin or some such similar structure using this free material. I made sure that its use as hardcore around the estate was embargoed from that day on.

“Life in the 1980s and 1990s was very busy, though, and the idea of the eyecatcher was left on the back of my desk. I did, however, work on the design of a suitable pyramid, which was the shape we had chosen for its ancient overtones, its ability to be viewed from all directions, and above all its suitability for building in our rustic concrete ‘stone’.”

As we wandered around the pyramid, Antony explained that the slope of seventy degrees gives a sharp elegant outline, not the lower and more lumpen forty-five degree profile familiar to us from Eygptian examples. The sharper angle also creates height for a door. Antony wanted the interior space to be accessible as a refuge for walkers and also for maintenance.

“By 2004 the design was settled, the huge pile of concrete ‘stone’ lay nearby, and the avenue was in the process of being replanted with the oaks. The estate was being transferred to my daughter and son-in-law Claire and James Birch, and they began a major campaign of reinvestment in the estate that took up all available time.

“By 2009, however, I had obtained planning consent for the pyramid from North Kesteven District Council which was the moment when this long-standing idea moved from an ambition to a very real possibility.”

The first sod of the foundation pit was dug in late April 2014 with the base dimension of 7m x 7m and the height of 10.5m all proving to be perfect in due course. The concrete slabs were broken using a pecker, then sorted and shaped by hand. The concrete has a rough texture thanks to the local Whisby gravel used in the 1950s mix, a very hard quartzite in rounded pebbles. As masonry blocks the material has a precision and colours which range from white through buff/yellow to ochre and dark red, and add an important warmth to the concrete. This same quartzite forms the sand in the white cement mortar, and the cobbles laid in the chamber, and it is a recurring feature in the paths and roads of the Doddington estate.

Once the plinth courses had been completed a steel mast was erected to the exact height of the finished structure, with four steel cables back to the corners of the plinth to guide the three builders working on the project. Builders’ lines could then be laid out from these cables to maintain the accuracy of the courses and the overall shape.

“The same steel mast also carried a plywood gauge to guide the internal profiles of the corbelled vault of the chamber,” continued Antony, “and as work progressed the mast also provided the ideal anchorage for the builders’ safety harnesses.

“The last three metres of the pyramid were built using a high-level industrial access lift and cage, and as a result it was not necessary to use scaffolding at any stage, which was a major cost saving.”

One small change has been made to the planned elevation. Originally the entrance was closed by a simple iron barred door to prevent the estate’s herd of Lincoln Red cattle claiming squatter’s rights, but from a distance this stood out as a distracting black rectangle. The problem has been solved by fitting four rustic boards to the door, which provide a colour and visibility very close to that of the pyramid as a whole.

I asked Antony if he minded his structure being referred to as a ‘folly’ but he explained that he is delighted to have joined a club, of sometimes eccentric but always visionary pyramid builders, who have realised an ambition to enhance the landscape.

“I must have seen hundreds of landscape parks, monuments and vistas and without exception they have all in their own ways created an enhanced sense of the place, of rural theatre, in presenting the countryside with romantic classical overtones. What I had not expected was the way in which the avenue immediately demanded an eyecatcher, and the eyecatcher in turn imposed a completely new interpretation of what had until then been no more than a well-tended farm in the flat lower Trent Valley. House, avenue and pyramid have become parts of a single, strongly defined new landscape.”